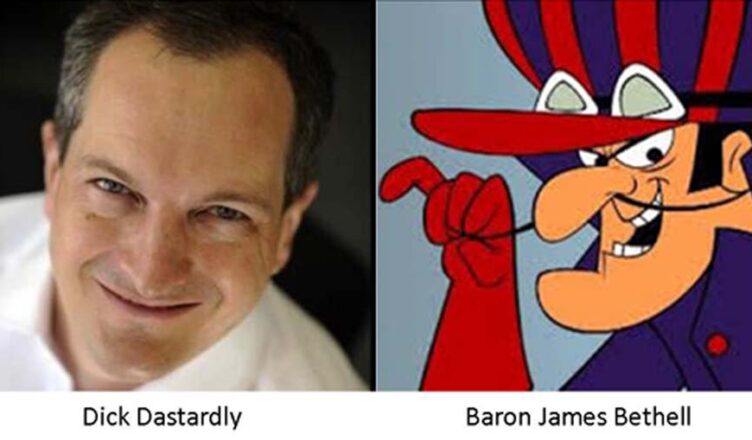 James Bethell, the Fifth Baron Bethell, tells us that “Nurses are well paid for the job, they have a secure job and they have other benefits. There are many people in this country who look upon professional jobs in the NHS with some envy and we shouldn’t forget the fact that some public sector jobs are in fact extremely well paid.”

He went on to dismiss an assertion made by the Bishop of Worcester that recognising nurses’ efforts in tackling Covid-19 would “best be done by a pay increase”, saying “But I just can’t agree with him when he says the best way of recognising the contribution of nurses is to give them the pay increase. That simply isn’t my experience of workplace engagement.”

In July last year, he blamed the poor for contracting COVID-19 after questions about why the least well off have double the Covid-19 death rates of the richest in society.

In August Bethell, who was privately educated at Harrow, told students not to worry about bad A-levels results because “fluffing” his own exams taught him “how to hustle”.

This specimen of hundreds of years of inbreeding is a hereditary peer who has a job for life, being paid £305 for every time he attends the House of Lords, travel expenses, and subsidised restaurant facilities. His salary as a junior health minister is £70,969, three times what a newly qualified NHS nurse can earn.

In the past, he has been Chief Executive Officer of Westbourne Communications, a big public affairs agency, whose clients have included the fracking company Cuadrilla. As such, the agency boasted about its tactics to counter anti-fracking activists. Similarly, it did the same with opponents of the high speed HS2 rail project.

Bethell is a supporter of various right wing free-market think tanks. He co-authored a report put out by the Centre for Policy Studies, backed by Keith Joseph and Margaret Thatcher, which promotes economic liberalism and de-regulation. He is a prominent Brexiteer.

Bethell is Minister for NHS Test and Trace, set up by Johnson as part of his response to COVID-19. He stepped into this post in March 2020, in what the Times called “a surprise appointment”. In 2019 he had supported Matt Hancock’s campaign for leadership of the Tory Party, handing him a £5,000 donation. He himself appointed advisers like the lobbyist George Pascoe – Watson, whose clients include the Boston Consulting Group, which has won several big government contracts during the pandemic. Senior members of Bristol Consulting Group are being paid £6,000 a day for, apparently, working to improve the Test and Trace project.

This privileged and arrogant nob is just one of many such in the Johnson government. Time to sweep away the lot of them.