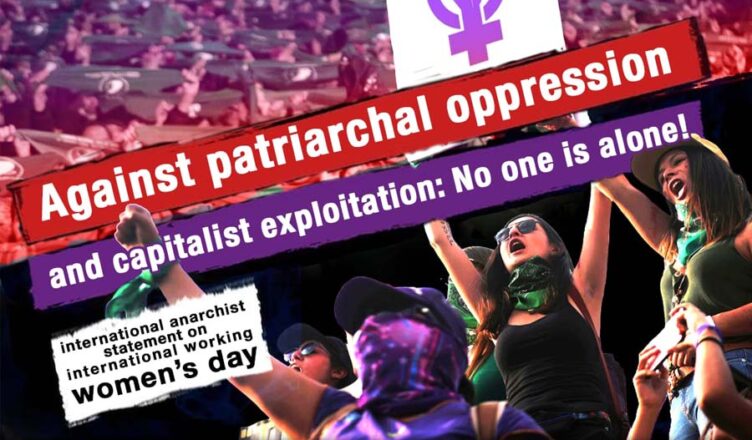 Against patriarchal oppression and capitalist exploitation: no one is alone!

The following statement on International Working Women’s Day has been signed by 19 libertarian communist organisations, including the ACG. Original English language text here.

Today, March 8, we commemorate International Working Women’s Day, a historic date on which we raise the struggle for the political, social, economic, and sexual rights of women, lesbians, and transgender people of the oppressed classes. Today, we aim to put an end to the systematic violence of patriarchy and support the revolutionary workers’, popular and anti-colonial struggle. First proposed by a group of socialist women at the Second International Conference of Socialist Women in 1910 in Copenhagen, the day was initially intended to promote women’s civil rights. Later, it became a day of agitation, mobilization, protest, and strike for the lives and liberty of women and dissidents of the gender system across the globe. From the protest for women’s labor and political rights in the industrial states at the beginning of the 20th century to the revolt for bread and peace by working women that began, along with other strikes and demonstrations, the Russian Revolution of February 1917, March 8 as International Women’s Day was slowly consolidated through the active struggle of working-class women. Therefore, we rescue such great attainment that allows us to remember the achievements of the feminist movement against patriarchal oppression. March 8 also allows us to appropriate the debates and proposals our predecessors had and build spaces that enable us to raise our voices against the injustices and violence of this capitalist, patriarchal and colonialist, system of domination.

The international commemorative day has had multiple banners of struggle that vary in each territory and time. Highlighting among them there’s the struggle for suffrage and equal pay, the recognition of care work and other tasks relegated to the private sphere performed mostly by women, the struggle for the decriminalization and legalization of abortion and access to contraceptives, and the abolition of gender-based violence materialized in high numbers of sexual abuse, femicides, and transfeminicides, among others. We also highlight the date as a space for women and dissidents that have historically allowed the organizational articulation of the feminist movement.  Lately, and has been characterized by massive mobilizations, most recently by the International Women’s Strike with beginning in Spain, the #NiUnaMenos movement in Argentina and Latin America, and the struggle for legal, safe and free abortion in countries around the world. Today we, working women, experience, on the front line, the social and economic crisis resulting from the COVID-19 pandemic, which uncovered types of violence and patriarchal domination often made invisible as the exploitation of feminine labor in the private sphere and subordination to the male figure within it. COVID-19 also facilitated the resurgence of domestic violence, harassment, and the increase in cases of femicides, transfeminicides, and sexual abuse due to confinement, which is why we mobilize on March 8 with such heartfelt urgency. However, while we recognize the importance of the feminist struggle in our times, we are aware, and therefore reject, the existence of white, bourgeois, and binary “feminism” that seeks to become hegemonic to the detriment of the oppressed. Thus, we raise, out of our social and grassroots organizations, disputes against patriarchal oppression from below and through direct action. We are also alert of the influence of the State on this plurality of currents present within feminism which seeks to accommodate the struggles and demands of working women within its institutions, to corset them in its machinery.

On the commemoration date, we also stress the importance of women and dissidents in the struggle for the rights of the working class and those oppressed by the system of capitalist domination, highlighting the activism of militants such as Teresa Claramunt, Luisa Capetillo, Lucia Sánchez, and Virginia Bolten, for the rights of women and dissidents, for the curbing of environmental exploitation, for the abolition of the State and the end of all oppressions, looking at the revolutionary transformation of reality. Thus, through mutual support, class solidarity, and collective care, and through the critique of the construction of a political theory based on traditional hierarchical, binary, and exclusionary conceptions of gender too, we fight for socialism and freedom for all. Therefore, we commemorate March 8 as a day of the revolutionary struggle for our emancipation that, as Emma Goldman wrote in The Tragedy of Woman’s Emancipation (1906):

“should make it possible for women to be human in the truest sense. Everything within her that craves assertion and activity should reach its fullest expression; all artificial barriers should be broken, and the road towards greater freedom cleared of every trace of centuries of submission and slavery”

For the liberation of the oppressed,

Long live those who struggle!