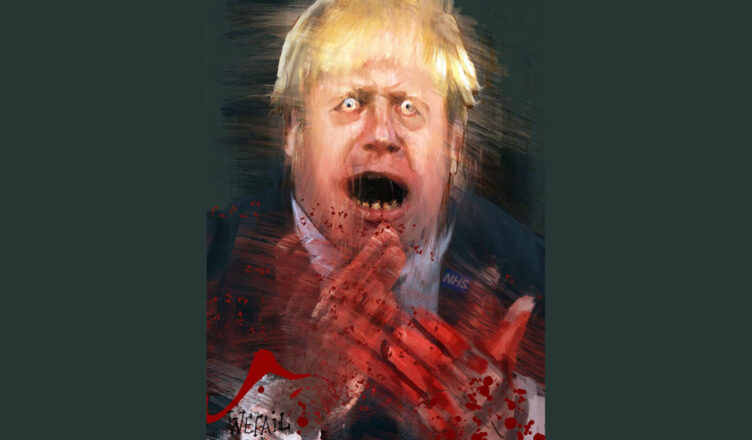 UK now has worst death rate in the world. Why?

As the official death tolled passed 100,000 on the 26th of January, the government’s disastrous Covid strategy is coming into some scrutiny by the mainstream press. It is about time, though they still miss the main point; the needs of the economy i.e. capitalism, have been put ahead of people’s health. What the government calls a “balancing act” is clearly weighted in favour of the economy and profits. In the UK, as in many other countries, the concern for ‘the economy’ has meant that the rich have done very well. A recent report from Oxfam concludes that current economic policies have enabled “a super-rich elite to amass wealth in the middle of the worst recession since the Great Depression, while billions of people are struggling to make ends meet”. The wealth of the world’s 10 richest individuals has risen by £400bn since the start of the pandemic. That sum could apparently vaccinate every adult on Earth, as well as restore the income lost in 2020 to the world’s poorest people.

Meanwhile, the working class is not only dying, especially those in the lowest income groups, often from Black and ethnic minority groups, but also suffering both financial and mental hardship. One of the key issues during this third lockdown is the amount of people going into work: approximately 20 million people. As a result, Covid cases rose by 70% in the first week of lockdown with 175 Covid clusters in English workplaces, not including care homes, hospitals and schools. According to Susan Michie from the Independent Sage group of scientists, the definition of essential has greatly expanded from the first lockdown. The government has “effectively handed over responsibility to employers to say whether they are essential or not”. So, millions of workers are forced into work; refusing to come in means loss of income or the sack. Giving employers power to define essential is literally giving them power over people’s lives.

Non-essential shops are open with click and collect (now banned in Scotland), many firms decide that they don’t trust their staff to work from home so they force them to come in, and industries such as construction (shut during the first lockdown) are still allowed to operate, with thousands of workers having to travel into places like central London in order to build luxury apartments or high rise office blocks. They might work outside for some of the time but inside refurbishment will involve close contact. And, if you are working closely with someone or having lunch with mates without social distancing then Covid can also spread. In Scotland, the government has put more restrictions on construction but the UK government has done nothing. Though the UK government says that people should work from home where possible, there is no legal obligation for employers to make this happen – another difference with Scotland.

One of the biggest outbreaks has been in a government department: the Driver and Vehicle Licensing Agency (DVLA). “More than 500 cases have been recorded at the Driver and Vehicle Licensing Agency’s offices in Swansea, where employees claim people with symptoms were encouraged to return to work while vulnerable workers have had requests to work from home turned down”.

Another key issue is the fact that no company has even been issued with an enforcement notice by the Health and Safety Executive (HSE) since the start of the lockdown, despite being contacted 2,945 times between January 6th and 14th. Overall, with the 97,000 Covid safety cases dealt with by the HSE since the start of the pandemic, only 0.1% have resulted in an improvement or prohibition safety notice, and not a single company prosecuted.

Some quotes from workers say it all:

“Every single facet of what we’re doing could be done in the comfort of our own homes. But we are forced to go in. It’s an irresponsible act, for the sake of a little bit of profit for a multibillion-pound company.”

“All we are doing is assisting the virus to spread. They are putting financial gain ahead of people’s lives.”

The other problem is that many workers would not be eligible for furlough if their workplace did close. This is true for many construction workers who are on temporary and zero-hour contracts. There have been many problems with workers getting furlough in any case. According to the Independent Sage Jan 22nd briefing, 71% of working mothers were refused furlough. Employers would rather sack workers. And it is questionable whether the furlough money is even getting through to workers but instead is going in the pockets of the bosses.

The lack of adequate income is also an issue for those who are diagnosed with Covid or are told to self-isolate because of contact. Many workplaces, including care homes, do not have proper sick pay – a key demand of the striking care workers at a north London care home. According to the January 22nd briefing of Independent Sage, only 18% of those who test positive stay at home for the required time. One of the main reasons given is that they cannot afford to stay at home. In fact, many from low-paid families do not take a test at all if they have symptoms, afraid of the cost of isolation. The Test and Trace isolation system is hampered by red tape and inadequately funded.

It is pretty obvious what needs to happen. The No Safety, No Work Campaign, the Hazards Campaign and Independent Sage have been arguing for months that the only way to actually get permanently out of lockdown is to have a Zero-Covid strategy. And this means a firm commitment to put health before profits by shutting down most workplaces with full furlough, forcing firms to allow people to work from home, and providing a living income for all who have to self-isolate or how are not eligible for furlough.

However, despite calls for this to happen, the government continues on its deadly course. It needs to be forced to change course and this can only happen if workers take action. The pandemic makes it hard for people to take to the streets in anger but workers, if organised, have the power to bring the government to its knees. Just the threat of strike action pushed the government to close schools and now it is time for other workplaces to follow.

No Safety, No Work: https://nosafetynowork.wordpress.com/

United Voices of the World: https://www.uvwunion.org.uk/en/

Industrial Workers of the World: https://iww.org.uk/