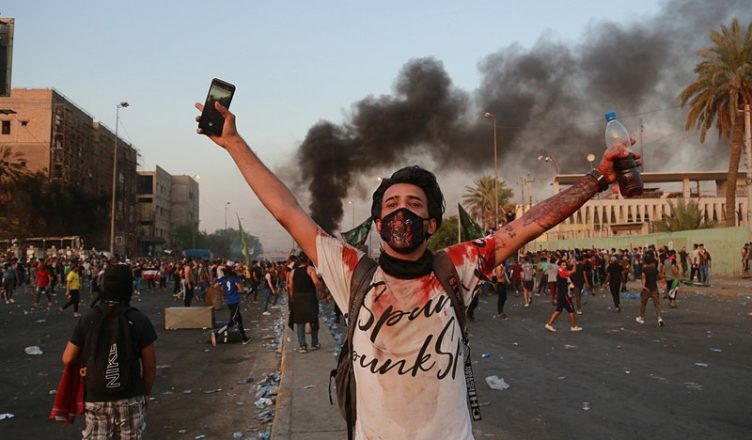 In Iraq in October there were mass actions against corruption, mass unemployment and the deterioration of public services.

Whilst ISIS has been heavily defeated in Iraq two years ago, there has been no improvement in the lot of the Iraqi working class and poor. Thousands of people, mostly young men, demonstrated on the streets. Once again, as in Chile, Ecuador and nearby Lebanon, the police and military were brought out to defend the government led by Adel Abdul Mahdi. Water cannon, tear gas and rubber bullets were used against the protestors, and at least 149 protestors were killed, most of them shot in the head, targetted by government snipers. Four thousand people were injured in the unrest.
In the aftermath, seven military commanders were sacked. The unrest subsided on October 7th but fresh waves of demonstrations were planned for Friday, October 25th.

Despite having the fourth largest oil reserves in the world, many are starving in Iraq, with 60% below the poverty line. The protests initially began against corruption and for better pay and conditions, but the movement, which appears to be leaderless, is now demanding the resignation of the Mahdi government.

Scared by the unrest, the principal Shiite spiritual leader in Iraq, Ayatollah Ali al-Sistani, called on the government to implement reforms.

Many feel that they have nothing to lose and are determined to go on with the protests, saying that a wholesale overturning of the system is necessary and that if they must die, it will be with dignity in revolt.