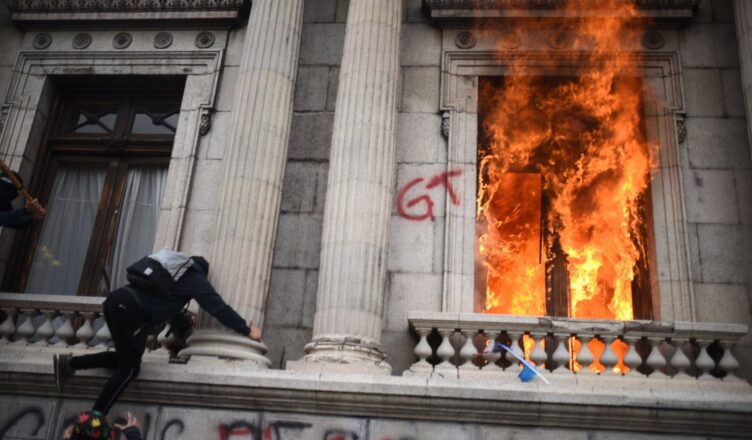 The situation in the central American state of Guatemala is worsening, aggravated by the COVID-19 pandemic and by two hurricanes, Eta and Iota, that devastated the country this month. In addition, Guatemala has been plagued by droughts over the last five years.

The government decided to introduce a budget to be implemented in 2021 that okayed cuts to food programmes, to public education, to care for victims of coronavirus, as well attacks on civil rights. The wave of anger among the population forced the government to backtrack on cuts to food programmes. Despite this, large numbers of people assembled in the capital, Guatemala City, on November 21-22 to protest against the budget and demand increases in social spending. In addition, they demanded the resignations of the President Alejandro Giammattei, and those who had passed the budget. The Congress (parliament) building was attacked and set on fire. There were also demonstrations in other towns, Alta Verapaz, Petén, Chiquimula, San Marcos and Quetzaltenango.

The government responded by sending special forces in against the thousands of demonstrators in Guatemala City, which started to attack them with tear gas and water cannon. Forty demonstrators were arrested.

The Giammattei government pledged that it would root out corruption in the country. In reality, they have brought in many austerity measures. Over fifty per cent of the population are living below the poverty line. Meanwhile the government is working to pay off its interest payments rather than funding social spending. Despite thee promises of the government, corruption remains endemic. A small elite, based on capitalists and landowners, is encouraging the austerity measures and privatisation, and the country is totally subservient to the interests of the USA and Wall Street. To the worsening economic situation has been added climate change, with droughts and storms, and the coronavirus pandemic.