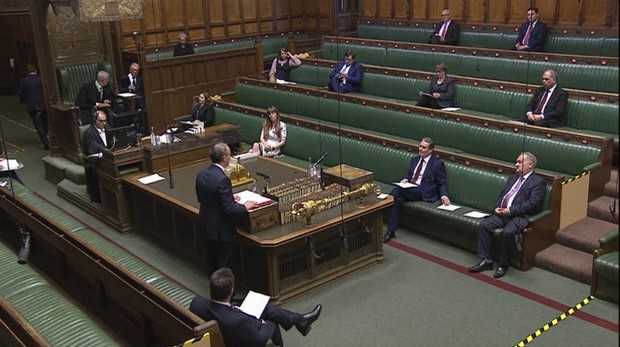 In an accompanying article on the Johnson government’s record on coronavirus, we were of the opinion that Johnson’s taking on of leadership roles was a lark, a jolly jape, for him. Now it’s not such a lark.

In reality Johnson not only has to deliver a Brexit, he also now has to grapple with the coronavirus and its consequences.

On one hand, he has to deal with the reluctance of many workers to return to unsafe workplaces. He will also have to face the seething anger of health workers, who may increasingly turn to militant action over lack of PPE equipment, and in the aftermath of a lockdown will pursue struggles over pay and conditions.

The recent debacle on May 10th when Johnson stated that the governments of Northern Ireland, Scotland and Wales had been consulted over an easing of the lockdown, when in actual fact they had not been consulted at all, and were continuing with lockdowns, indicates the increasing fragility of the United Kingdom, already aggravated by the decision to exit the European Union. This continuing discord will only get worse, with the different nationalist parties pushing further for devolution and even independence. Even the reactionaries of the Democratic Unionist Party in Northern Ireland sided with Sinn Fein over Johnson’s incoherent message and stated that lockdown should continue. Both Sinn Fein and the DUP suffered at the last elections, and are aware of dissatisfaction with both parties over their failure to deal with the health crisis. People are aware that it was a DUP minister of health who brought in wage cuts for nurses, and that with other austerity measures, this has damaged the NHS in Northern Ireland. The DUP are now tacking away from Johnson to avoid further losses at future elections.

On top of the widening cracks in the UK, the Johnson regime will have to face the looming recession, and indeed economic depression, that affects not just Britain but the world. This has already massively boosted unemployment figures, and the thought of large numbers of discontented unemployed would frighten any government. The Bank of England has already announced the worst recession in 300 years.

Leaked documents and a recent announcement from Rishi Sunak, the Chancellor of the Exchequer, show that the government is hoping to recoup losses from its coronavirus payouts, by increasing income tax and attacking State pensions. These increases in taxes will not be aimed at the rich and super rich, but at the mass of the working population. In addition, Sunak has announced that he plans the imposition of a wage freeze on public sector workers. This will last at least two years. In the present volatile situation, where there is much sympathy for health workers and other key workers in the public sector, this is a dangerous move by the government. The government is again looking to punish workers for its own failings, as happened with the economic crash of 2008.

In addition, Sunak announced that the furlough scheme, where the State subsidises the wages of workers laid off by the pandemic, would be extended by four months. What many have failed to notice is that Sunak said that employers would be asked to contribute more to this scheme. In reality, this would have employers cutting their losses, and throwing more workers on the dole, exacerbating the already dire situation.

Another key component of the British establishment will also be under threat. In the past, the Queen has clawed back falling public approval for the monarchy by adopting a more “down with the people” approach. However, the recent unease over Prince Andrew, and the break of Harry and Megan Markle with the royal family, will be further compounded by the need for the monarchy to self-isolate, given the vulnerability of its older members, the Queen herself, Philip, Charles. This will cause a return to the old ways of the monarchy, viewed as distant and aloof. At the moment the Royals are acting, as usual, as the window dressing for the British royal class, with the Queen’s recent urging for national unity in face of the crisis, and recalling the experience of World War Two. However this popularity of the monarchy may well prove to be a fleeting thing, under the impact of coronavirus.