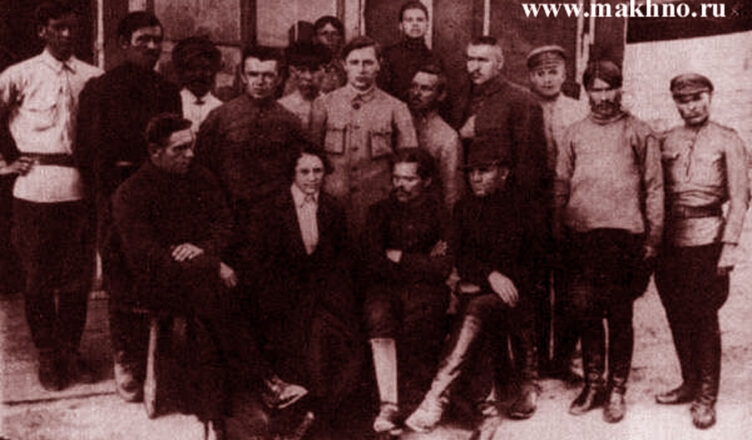 I approached this book with some enthusiasm. A new book on the Makhnovist movement using sources previously unreferenced in the English language world. I was sorely disappointed. I should have read Darch’s doctoral thesis on Makhno, where his bias against Makhno and anarchism is immediately apparent. An example of that thesis’s bias can be seen in the following: “The Makhnovist movement, because it attracted literate supporters from the anarchist intelligentsia, is the best documented of the [peasant rebellions]. Historically, anarchism has often been the political expression of resistance adopted by social classes whose position is undermined by the historical trend of their times. Typically, anarchist revolutionaries are rural aristocrats—Bakunin, Kropotkin, Tolstoy—or wealthy peasants; rarely are they involved in centralization or industrialization. Anarchists are not so much anti-nationalist as pre-nationalist. They look back to the community that preceded the centralized nation-state. Their future is firmly rooted in an idealized past…. When Makhno began to struggle against the modernizing revolution of the Bolsheviks, a party of great theoretical and practical sophistication with the ability to adapt its strategy to changing circumstances, he failed.” So, we have the Leninist usual lies, with no actual checking, that anarchists are either aristocrats or wealthy peasants, that they look back to a pre-industrial past, etc! Notice how Darch forgets that the “intelligentsia” are another component of these supposed anarchist types. Indeed, several of these “literate” “intellectuals” were in fact workers like Arshinov (metal worker) or Aron Baron (baker).

In fact any serious analysis of anarchist inspired movements, for example in Spain, France, Italy and Latin America point to the mass of their memberships coming from the industrial working class. Similarly, the existence of kulaks (wealthy peasants) was very rare among the Makhnovists, considering its hostility to such rich peasants, who anyway were a minority among the peasantry. Indeed many leading Makhnovists had experience of industrial work, Makhno himself working in a local iron foundry, whilst there were other foundry workers like Veretelnik, Zuychenko, and Zadov, factory workers like Popov, whilst others were railway workers, like Chubenko, Pravda and Belash, mechanics/fitters like Brova and Budanov. Many had emerged from the poor peasantry and were being proletarianized.

Darch appears to have mellowed considerably towards Makhno since the thesis, he does not repeat the accusation that the Makhnovists had a high percentage of wealthy peasants (kulaks) in their ranks, and his descriptions of the relationship between the Makhnovists and the Bolsheviks are fairly balanced, but old prejudices are still apparent in this book.

Now Darch does indeed use new sources, from different points of view. For example, we have the best of these, Vasily Golovanov, who wrote a book on Makhno in 2008. But Golovanov himself admits that this book is a Russian version of the French anarchist Alexandre Skirda’s book, published in English as Nestor Makhno: Anarchy’s Cossack. Golovanov began writing about the Makhnovists in 1988, in the period of openness under Gorbachev, and his efforts to examine the movement, were to be fair and measured, and he even admits in articles from the period that the Makhnovists were betrayed by the Bolsheviks, assigning personal responsibility for this to Trotsky, a pretty safe bet considering the latter’s standing in the Soviet Union.

Other sources are the senior history lecturer at the University of Essex, Felix Schnell. Darch refers to Schnell’s article, “Tear Them Apart…And Be Done With It!” The Ataman-Leadership of Nestor Makhno as a Culture of Violence. As the ‘Makhnologist’ Malcolm Archibald notes: “Felix Schnell I regard as a White historian: he uses White sources (uncritically) and his work is infused with a White point of view”. Schell’s account of Makhno is exceptionally biased, for example he cites various dubious stories and then adds: “Even if some stories are simply fairy tales, they nevertheless give an image of the Batko that suggest the behaviour and actions of the real Nestor Makhno”. In fact, Schnell even alleges that Makhno was not an anarchist, despite the overwhelming evidence to the contrary. In addition, he also compares Makhno to Pol Pot in Cambodia and the Shining Path Maoists in Peru!! Schnell is attached to the ‘sociology of violence’ as developed by Elias Canetti. As the German anarchist and researcher Lou Marin notes: “Problems of this sociological current: officially it denounces the violence of the central State, at the same time it analyses only violent small groups in a civil war, therefore inevitably, most often, the State is finally presented as a kind of last refuge, necessary to put an end to the phase of terror of the unleashed violence”. Schnell referred to the memoirs of Alexei Chubenko, a leading light in the Makhnovist movement. Chubenko was in fact captured by the Bolsheviks and wrote these memoirs under duress, denouncing the Makhnovist movement. One can imagine the kind of exquisite tortures applied to Chubenko, who had been a convinced anarchist communist, by the Cheka, the Leninist secret police, to bring about these denunciations. As the Ukrainian historian Volodymir Chop noted in a picturesque figure of speech, Chubenko was lying like a grey gelding. Thus, much dubious information is filtered into these sources.

Unfortunately, Darch himself uses all of these sources uncritically, leading to the repeating of tenuous stories and outright slanders against the Makhnovists.

For example Darch quotes the anarchist Ida Mett’s late account of Makhno to repeat the false statement by her that after Makhno’s death, his wife Galina Kuzmenko now became the wife of Voline, the anarchist intellectual who had participated for a short while in the Makhnovist movement and had written an account of it. This has been discounted by any serious scholar of Makhno, and indeed, according to Archibald, Galina later became aware of these inaccuracies and refuted them in a statement in Ukrainian, not yet translated into English. Skirda himself scoffed at this allegation, and one would think that Darch, who gives him a nod in his acknowledgements, would have taken account of this.

Other inaccuracies occur with the supposed diary of Kuzmenko, discovered by the Bolsheviks, and used to discredit the Makhnovists. The Russian historian Vladimir Litvinov regards it as a fabrication by the Cheka. On the other hand, Malcolm Archibald regards “Galina’s ‘diary’ as authentic, having translated it from the Ukrainian original (or close to it), and hopes to publish it soon. There are three places in the diary that were distorted by the Bolsheviks for their own purposes and have had an effect on subsequent historiography.”

Darch seems to believe the entries were genuine, and enumerates allegations of Makhno’s drunkenness and his dubious sexual behaviour, then goes on to quote other dubious stories about his sexual misconduct. Makhno and the Makhnovist commander Shchus are described as visiting a brothel in Berdyansk during their occupation of that city in May 1919. This account was based on that written by Isaak Teper, on hearsay, as he was not in Berdyansk then and did not in fact join the Makhnovist movement until 1920. In fact, as Volodymir Chop writes: Teper was “a member of the secretariat of the Anarchist confederation “Nabat” who betrayed his own comrades in 1921 and started working for the Extraordinary Commission (Cheka). In the beginning he worked as a secret agent among the Makhnovists, and then, after the suppression of the insurgent movement, took on the job of propagandist, exposing the loathsomeness of the internal life of the anarchist forces to the reading public of Soviet Ukraine.”

Darch refers to Makhno’s first “wife” Anastasia Vasetskaia. Darch claims that Makhno and Vasetskaia married, when in fact there is no documentary evidence that there was any such ceremony, religious or civil. They did indeed live together, and a child was born, but they did not break up, as Darch alleges, because of the disapproval of Makhno’s “comrades in the ‘Black Guards’ [who] threatened Vasetskaia and forced her to leave Guliaipole (Makhno’s home village) with the baby”. This again is a fabrication, coming from the writings of Viktor Belash, a Makhnovist commander captured by the Bolsheviks, and who later acted as an agent provocateur for the secret police within the underground Makhnovist and anarchist movements. He cannot be counted on as a reliable chronicler. In actual fact it was the outbreak of hostilities that separated the couple and she married someone else, living to the age of 84.

It is inaccuracies like these, and others, that make me unable to recommend this book. The Makhnovists and Makhno himself were no angels, but they deserve better than this. Despite Skirda’s sometimes hagiographic* appraisal of Makhno, his book still remains one of the better ones on Makhno. A better picture of the Makhnovist movement can be established by reading that, together with Arshinov’s and Voline’s account, as well as the book by M. Malet , Nestor Makhno in the Russian Civil War, and Makhno’s three volume memoirs.

• A hagiography is a type of biography that puts the subject in a very flattering light.