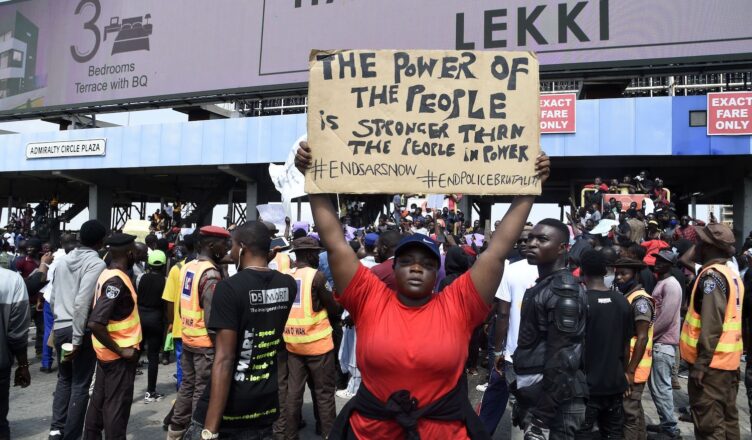 On October 3rd members of the much-hated Special Anti-Robbery Squad (SARS) shot a young man, dumped his body at the side of the road and stole his car. This murder was recorded on a videocamera and then went viral on social media. This set off three weeks of demonstrations against police brutality and against corruption in Nigeria, demonstrations that lasted three weeks.

At first the government headed by President Muhammadu Buhari, promised the disbanding of SARS and supposedly replaced with a new unit, SWAT (Special Weapons and Tactics). In fact, the same SARS personnel now made up the new SWAT outfit. Only a name had been changed.

Because of this, the demonstrations continued. Next, the Nigerian State responded with its old standby, violence. This in part involved the government hiring criminal thugs to attack demonstrators. This too, failed to intimidate and so now the military was brought out onto the streets and curfews were imposed in various cities. These protests were now becoming increasingly radicalised, with attacks on the police.

By October 20, however, the protests had spread across Nigeria. Some of the assets of the Nigerian ruling class were also targeted during these protests, banks, public buildings, TV and media buildings, shopping malls etc., and the largest and most lucrative toll road in the country, Lekki, in Lagos, was blockaded. On that day the military attempted to brutally end the protests and shot dead at least 12 unarmed people at the Lekki tollgate. So far 1,500 people have been arrested and 69 have been killed by police and military.

The median age of the Nigerian population is 19 years, and large numbers of youth, disenfranchised, unemployed or in low paid jobs, took part in the demonstrations. There was unity beyond ethnic, tribal and religious divisions.

The murder was a spark that ignited widespread anger among the population, where the interests of the old colonial power are allowed to continue to make huge profits, where corruption is engrained within the political system, and where a small ruling elite was able to pocket a staggering $20 trillion between 1960 and 2005. Unemployment stands at 27.1%. The government has signally failed to handle the spiralling problem of the coronavirus. Food, fuel and electricity are soaring in prices. All of these factors came together in a wave of social unrest.

The SARS was provided with training and arms by the British government in 2019, through the Conflict, Stability and Security Fund (CSSF) of the Foreign Office. The British government wishes to protect its interests in Nigeria, in particular with Shell Oil which has many investments in the Niger delta. The SARS unit is a State sanctioned criminal gang. It regularly robs people, and tortures and extorts.

The government is now trying to close down social media and freeze bank accounts of activists. Nevertheless, these demonstrations have proved to be the largest in Nigerian history. Whether the movement can grow, can establish its own class based committees remains to be seen, in face of the increasing State repression.