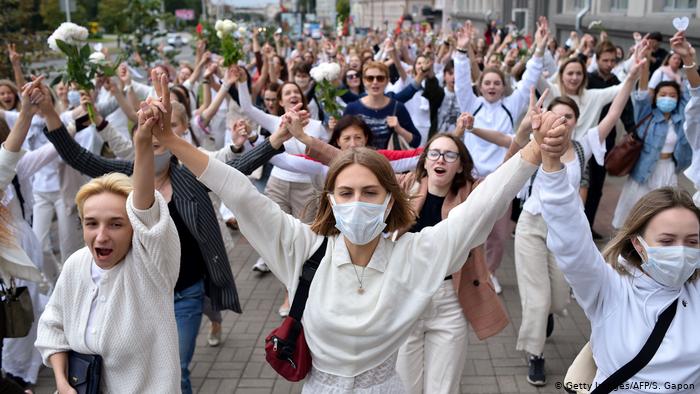 On August 13th, thousands demonstrated in the Belarusian capital Minsk. At the same time workers came out on strike at the main car factory BelAZa. Other workers went out on strike at other large workplaces, including metal workers, building and construction workers, electronics, pharmaceutical, chemical, fertiliser, ceramics, and food workers. These include the Minsk Electrotechnical Plant, the Institute of Chemistry of New Materials of the National Academy of Sciences of Belarus, the Minsk Margarine Plant, the Minsk Automobile Plant (MAZ) the Minsk Tractor Works. They were joined by healthcare workers and even members of the Minsk Philharmonia orchestra. Railway workers also came out on strike. Workers at the IT company, Rozum Robotics, began an indefinite strike. In the city of Grodno, workers at the Azot plant came out, as did those of Grodnopromstro and Grodnozhilstroy JSC (construction industry). An indefinite strike began at the VIRPIL plant, which manufactures aircraft parts.

This was in response to the horrendous violence unleashed by Lukashenko’s thugs in uniform, the police. A video is circulating on social media of a cop smashing the car window of an elderly driver, without provocation of any kind. When the driver protests, he is beaten by five cops and arrested. Another video shows a member of the police special forces burning his uniform in disgust whilst another shows a cop urging his colleagues not to attack the demonstrations.

So far more than 6,700 people have been arrested. Striking workers held mass meetings at their factories, despite police repression. The main call is for Lukashenko to resign. Today (14th August) the regime is showing signs of panic, and is beginning to release some of those arrested, and has issued an unprecedented apology for its behaviour. Other demands are the end of state violence, the liberation of those arrested, and new elections. At the same time, Lukashenko is attempting to blame “provocateurs”.

Lukashenko now faces pressure on the streets and in the workplaces. In addition, Belarus’s neighbours, Latvia, Lithuania and Estonia, as well as Ukraine (all of them now allied to the USA) are putting pressure on the regime. In addition cracks seem to be emerging in the state bureaucracy, with some attempting to distance themselves from Lukashenko.

Another notable feature of the unrest in the workplaces is the number of workers leaving the State-sanctioned unions. In addition, women’s organisations are now mobilising and taking to the streets. Women dressed in white formed long “solidarity chains” on the streets of Belarusian cities. Demands are now being advanced for the mass quitting of the official unions, the privatisation of enterprises, and the immediate release of the prisoners. As the Telegram channel ZabastovkaBY (Strike Belarus) recently declared:

Belarus is in the grip of a protest movement … and now many people are demanding that the factories be stopped, in order to stop police violence. But that is just the start.

We don’t just need a one-off strike for free elections. We need an organisation that will rouse workers every time that the manager or boss “loses the plot”. All of us spend most of the day at our workplaces, and it is from the situation there, from the fear of losing our jobs, that the most oppressive unfreedom grows among us.

We need effective organisations of working people, constantly active, and independent of the authorities and the owners of companies.

Furthermore, such organisations are needed not only at the gigantic state-controlled industrial enterprises. Today the majority of Belarusians already work in the private sector, and the situation there is often no better than at the state-owned workplaces. And those private bosses, no less than the state enterprises, are “sponsors of the system”.

We hear about these issues less often, because there is not a single businessman who would want an organisation in his enterprise that could stop him feeding his appetites. But without organisation by working people, and without struggle in the private sector, that feeling of oppressive unfreedom that is suffered by most Belarusians will never disappear.