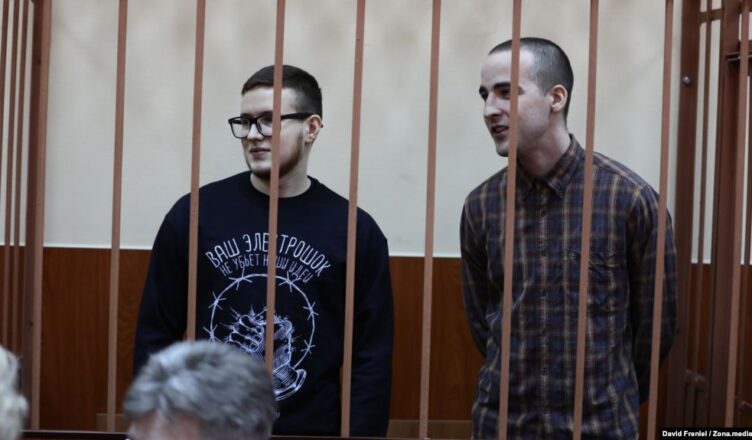 The regime run by secret policeman Putin which we name as the Chekocracy (1) from now on, sentenced Viktor Filinkov to 7 years and Yury Boyarshinov to 5 ½ years prison on fabricated charges of belonging to a terrorist group.

Thirty people who demonstrated outside against the show trial were arrested by police. One demonstrator who chanted “Let them go!” and “FSB (Federal Security Service, the secret police) is the main terrorist!” was handcuffed.

The trial began in February. Boyarshinov pleaded guilty, saying that he did not know that Set was a terrorist group when he joined it. Filinkov rejected the charges, saying that his initial guilty plea was given under duress.

In February seven other members of the group were sentenced in Penza to a total of 86 years. Some were tortured to gain confessions. The FSB allege a network with cells in Moscow, St. Petersburg, Penza, and Omsk, as well as in neighbouring Belarus. The Belarusian authorities have stated that they were unaware of such a cell in their country. Amnesty International has called the charges: “a figment of the Russian security services’ imagination… fabricated in an attempt to silence these activists.”

Putin is scared of any opposition to his regime and some of his first victims are anarchists.

(1) The Cheka were Lenin’s murderous secret police, who went through various name changes, NKVD, OGPU, KGB, etc. before ending up as today’s FSB. Putin was a leading official in the KGB.