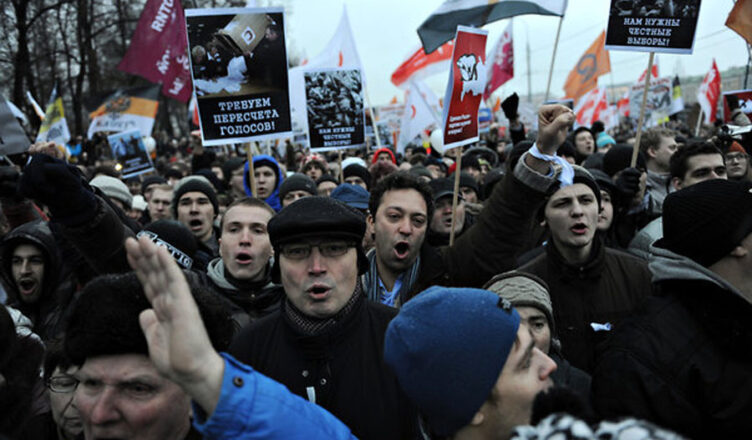 The arrest of Russian populist leader Alexei Navalny on 17th January after his return to Russia, follows his flight to the West to recover from poisoning, very likely ordered by Putin personally. The arrest triggered a large number of protests across the Russian Federation, involving tens of thousands of people, from Vladivostok in the east, to Moscow and St Petersburg in the west, and involving 70 cities. In the east, in the city of Khabarovsk, a dozen demonstrators were arrested and then beaten in custody. The same scenario happened in Vladivostok, with one demonstrator beaten unconscious. Riot police turned out in large numbers to attack the demonstrators.3,400 people were arrested across Russia. The biggest demonstration was in Moscow, where 40,000 gathered and chanted for Putin to resign. There the riot police attacked the crowd with batons. Despite the severe weather, with -50 degrees in Vladivostok, despite Covid, despite a clampdown on the Internet and social media, and despite the threats of State violence, the first protests have proved to be on a large scale.

Navalny managed to catalyse a movement that threatens to destabilise the Putin regime, crystallising discontent about the increasing inequality in Russia, and the reign of a kleptocracy (rule of thieves). When the state capitalist Soviet regime collapsed, its apparatchiks (Party bureaucrats) factory managers, and secret police chiefs converted themselves into private capitalists, making huge fortunes, whilst the mass of the population face a deteriorating lifestyle. A sign of the decay of Russian society has been highlighted by the Covid pandemic, with a health service unable to cope.

Growing anger and resentment was focussed by Navalny’s campaign, which included a video of Putin’s secret palace. This palace on a huge estate by the Black Sea, cost £1.12 billion pounds, and was funded by cash, according to Navalny, siphoned off from government resources, including money allocated for the buying of medical equipment. It was payrolled by Putin’s inner circle, which includes billionaires and heads of the oil industry. The land is officially owned by the Federal Security Service (FSB) the modern name for the repressive and murderous secret police founded by Lenin and Dzerzhinsky, the Cheka, which went through various name changes, GPU, OGPU, KGB, to become today’s instrument of Putin’s rule. Putin himself worked for the KGB for sixteen years before becoming a politician. The palace and its grounds house an ice-hockey rink, a pole-dancing area, a private theatre, a casino, a cinema, a room for toy car racing, an ‘aqua disco’, an arcade room with slot machines, a church, tea houses, a heliport and a vineyard. A double-headed Tsarist eagle stands above the main entrance. After all, Vladimir Putin is a modern-day Tsar. In order to construct the palace, virgin Pitsunda pine forests, protected under Russian law, were chopped down, causing devastation to the local environment.

The video was seen millions of times in the few days since its release, galvanising the wave of protest. It was significant that crowds chanted “aqua disco” and brandished toilet brushes sprayed gold, to deride the gold-plated toilets in Putin’s palace. Photographic evidence reveals that young people were the main targets of arrest. The regime thought that it could count on the loyalty and gratitude of Russian youth, and this has been signally shown to be not the case, causing youth to be targetted. Putin will be seriously worried about the scale of the protests and will react with greater repression, which might well spark larger demonstrations. His neighbour Lukashenko, in Belarus, supported by Putin, is still in a precarious state after mass street demonstrations and Putin is worried about a similar scenario.

We should have no illusions about Navalny though. He has built a movement based on populism and Russian nationalism. In 2006 he campaigned for a far-right event, the Russian March, to be allowed to go ahead, and took part in it. The movement he founded the following year, The People, went into alliance with the nationalist groups the Movement Against Illegal Immigration and Great Russia. He supported Russia during the war against Georgia in 2008, and called for all Georgians to be expelled from Russia. On several occasions he has called for the expulsion of illegal immigrants and demanded visa restrictions for the Central Asian states of Kazakhstan, Turkmenistan, Kyrgyzstan, Tajikistan, and Uzbekistan. He supported a nationalist campaign, Stop Feeding the Caucasus that has called for ending federal subsidies to the governments of Chechnya and other North Caucasus republics, part of the Russian Federation.

Navalny is against “corrupt businessmen”, not “honest” ones, and he advocates complete freedom for business interests in Russia. He is a supporter of economic liberalism, which in no way will benefit the Russian masses. He has managed to become the lightning rod for the raging discontent felt over inequality and corruption and repression. The emerging movement needs to break with him and his ilk and establish its own independence. This means a critical engagement with the movement by revolutionaries in order to attempt to wrest it from the influence of the Navalny group. This must have the aim of working towards a revolution to overthrow the Putin kleptocracy ¬ and to establish genuine communism in Russia – libertarian communism.

Neither Putin nor Navalny!