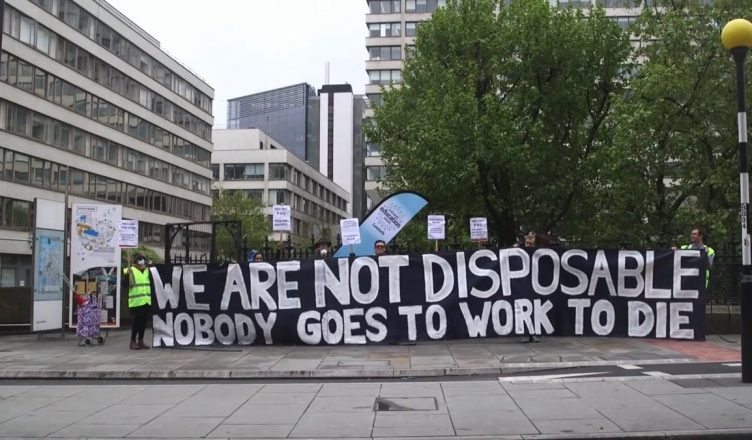 Nurses from Guy’s and St. Thomas hospitals assembled outside St. Thomas’ Hospita; with a large banner saying: We Are Not Disposable, Nobody Goes To Work To Die. They then marched to Westminster Bridge and blocked the road there, finishing the protest by hanging the banner over the bridge. Meanwhile doctors and nurses protested at St George’s Hospital , Tooting and Lewisham and Greenwich NHS Trust.

Building Workers Protest over Being Forced into Work

The Construction industry’s cartel of bosses, the Construction Leadership Council (CLC) recently announced that building sites should remain opening and that social distancing need not apply for 15 minutes at a time!

In response building workers from Shut The Sites campaign blockaded a Laing O’Rourke site on 28th April, Workers’ Memorial Day, set up as an action day around deaths in the workplace. They went on to gather at the Building Worker statue at Tower Hill. Shut The Sites campaigners also delivered body bags to the head offices of construction firms in the City of London on the same day, to symbolise the building workers who will die from the coronavirus because of construction bosses’ greed.

Major contractors Bellway, Redrow, Persimmon, Vistry and Taylor Wimpey have now all re-opened their sites. It is clear that despite the talk from the government that only essential work should be carried out under the pandemic, the construction bosses are deliberately flouting this and are following Michael Gove’s statement that construction and manufacturing could continue. Gove represents the faction in the government that is keenest on ending the lockdown and sacrificing workers for profit, and, of course, many of the big construction companies give considerable sums to bankroll the Tories.

Building workers should follow the example of the up to one thousand workers who walked out of the Seagoe Moy Park site in Portadown in late March.

Also on Workers Memorial Day, outsourced cleaners at the Ministry of Justice in London walked out after two of their workmates died from COVID-19.