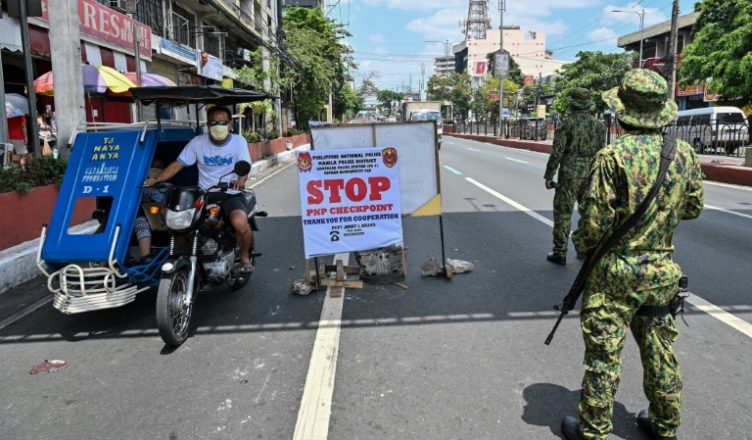 Written by Simoun Magsalin with input from the Bandilang Itim Collective.

In March 2020, the people of the archipelago known as the Philippines were alarmed at the rate of local transmission of the disease known as COVID-19. On March 12, police and military forces were mobilized to enforce a community quarantine for the whole of Metro Manila scheduled to start on the midnight of March 15. This quarantine was later generalized for the whole island of Luzon, a population of some 53 million souls. That the mobilization of the state’s apparatus of violence was more noticeable than the mobilization of medical and social resources is telling of the administration’s priorities.

A regime of violence is in place. Soldiers with assault rifles set up checkpoints; one questions the necessity of assault rifles against the coronavirus—do these people plan to shoot it? At these checkpoints, some women report being sexually harassed. Local police and barangay officials took it upon themselves to creatively experiment in punitive measures like caging alleged lockdown violators in a small cage. A police officer was recorded threatening to shoot residents for purportedly breaking lockdown while hitting residents with a stick in a Muslim community in Quiapo. A homeless lola was violently arrested for being outside during curfew hours—essentially arrested for being homeless! Houses are still being demolished during a time when people urgently need homes to stay in. A teacher and her son in General Santos were arrested without warrants over Facebook posts. A congregation of people looking for relief goods in Barangay Bagong Pagasa were arrested. The National Bureru of Investigation is subpoenaing people for “unlawful utterances” on social media. President Duterte went on record threatening warrantless arrests against “disobedience” and in a later speech threatened to shoot people for going out of their homes. Indeed, someone was shot by police at a Bulacan checkpoint, the police washing their hands of it like they did with the drug war.

Under the state of things, it is not an exaggeration to say the government of the Philippines has effectively imposed martial law in fact, if not formally declared in law. At a time of crisis, the gut instinct of the State was to mobilize and deploy its apparatus of violence. The deployment of medical resources is secondary to the assault rifles deployed. Instead of the deployment of increased medical resources, we have uniformed forces aimlessly and needlessly straying city borders with no other purpose than installing themselves as the false faces of the state’s peace and order. It is peace and order and not public health that is the priority of the state.

This martial law is extralegal, not that legality has significance to anarchists in the archipelago. Activists of all stripes understand that the state apparatus of violence is not limited by what they prescribe in law. State violence has always been both legal and extralegal, never mind that legality is a pointless distinction when the balance of power favors the state. Legality is meaningless when what is violent can simply be legalized in an act of congress or municipal ordinance—indeed that is what happened with the Bayanihan to Heal as One Act.

The deployment of the apparatus of violence to literally combat a medical emergency betrays a certain opportunism from the state. The state is opportunistically using the crisis to expand its police power. While the purported purpose of the lockdown is to quarantine, it is also a godsend to the fascists in the police and military as an excuse to crack down on dissent. And what of the new laws they put into place now? What guarantee do we have that the extreme measures the state takes today do not become the new normal after the end of COVID-19 crisis?

We have seen an unprecedented expansion of the surveillance state with drones and cameras being drafted to keep a close eye over public spaces. Instead of using their resources to feed people, they instead use this crisis as an opportunity to expand their ability to do surveillance!

In a special session, congress railroaded the Bayanihan to Heal as One Act with its controversial provisions on granting special powers to the Office of the President and dramatic jail time and fine penalization for dissenters.1 This is the use of shock doctrine, or the opportunistic use of crisis to pass controversial or questionable laws. First described by investigative reporter Naomi Klein, the shock doctrine is used specifically during crises like our own to take advantage of the difficulty to build resistance to these policies due to the crises. The state is using this crisis as an opportunity to expand its power. This is not a phenomena isolated in the Philippines; Hungary is now practically a dictatorship after Prime Minister Viktor Orban used the crisis to expand his powers to practically dictatorial levels and now rules by decree.

We anarchists are skeptical of authority itself. We do not think those in authority have our best interests at heart. We think they are there only to reproduce and expand their own power. After the crises passes, the state of emergency will be lifted, but the new powers and the new state of surveillance will stay.

We anarchists in the archipelago do not contest the need for a quarantine. After all, a quarantine and social distancing is needed to protect the most vulnerable among us like the immunocompromised, people living with HIV, and our elderly.

With that said, a quarantine enforced by violence and guns is clearly the wrong way to implement a quarantine. It does more harm than good. The checkpoints are made up of squads of large men with guns with barely any medical equipment in sight, not to mention the repeatedly noted lack of trained medical professionals. Reports of the vagueness of protocol, sexual harassment, and sometimes outright robbery and extortion on the part of the police and military personnel are being posted by people who go through the ordeal of dealing with them. What is even more alarming is the possibility of the checkpoint officers becoming vectors for the diseases themselves with reports of checkpoints without face masks or police and soldiers in close contact with the people they check. Checkpoints also risk becoming a place where people are forced to congregate, creating possible vectors for viral transmission. Ultimately, soldiers and police are trained in violence, not empathy or care-giving. Thus when confronted with homelessness, these people respond with violence—arresting the homeless instead of giving them a home, as was the case with lola Dorothy Espejo.

The severe discrepancy between resources devoted to militarized policing versus medical needs is made even more apparent by this trend of “VIP testing.” Politicians, oligarchs, and elites are able to jump the line and gain priority access to COVID-19 testing all the while people are being turned away from critical treatment due to lack of testing.

On April 1, the elitism of the regime was apparent where people congregated at a national highway in Barangay Bagong Pagasa upon hearing a rumor that food packs would be distributed there. They were met with mass arrests, purportedly for breaking quarantine. Instead of meeting needs, the state opts to just arrest them all. Meanwhile Senator Koko Pimentel who willfully broke quarantine protocol knowing that he was a patient under investigation is still a free man without any repercussion other than public outrage. Pimentel scandalously endangered critical medical personnel when it was reveled later he was positive for COVID-19.One also remembers that convicted plunderer and widow of the old dictator Imelda Marcos is still a free woman despite the courts deeming her criminal. It is clear that law and protocol only apply to toilers and dispossessed while the elites can live as they will, willfully endangering working people around them.

We also see the discrepancy in the dismal provision of relief packs. Endless emergency funds are activated but relief provided is paltry. These dismal relief goods are contrasted with images of agricultural traders in the Cordilleras destroying and discarding vegetables simply because they cannot sell these! Vegetables are being thrown away while people are being arrested for protesting their hunger. In these times of crisis the need for an economy to fulfill needs instead of profits is increasingly urgent. One wonders why with all these emergency funds activated from the crisis, government agencies cannot simply purchase all these produce before they are discarded.

Against a militarized quarantine, the people of the archipelago demand in one voice: Solusyon Medikal, Hindi Militar!—Medical solutions, not military! Against the elitist privilege in accessing COVID-19 testing kits, activists cry out: free mass testing now! Against the paltry provision of goods, the people organize in mutual aid and bayanihan networks that seek to fulfill needs.

Quarantine and Capitalism are Incompatible

During this time of crisis, it is increasingly apparent that quarantine and capitalism are incompatible. A quarantine requires people to stay at home, limit going out, and practice social distancing. But how can people stay at home if they are precarious workers under a no-work no-pay scheme and live paycheck to paycheck? How can people confine themselves to their homes if their needs are dependent on their paychecks? If workers are laid off, how will they afford groceries and rent while in quarantine?

A quarantine needs to fulfill the needs of the people as a irreducible minimum for the reproduction of daily life, that is to say, to be able to access food, water, medicine, and other things needed to stay alive. But production under capitalism does not revolve around meeting needs, it revolves around meeting profits. Thus when a state of emergency shuts down the engines of profit, so does the engine of wages shuts down, and with that the needs are left unfulfilled.

Against the contradictions between capitalism and quarantine we need a system that meets needs instead of profits. We need a quarantine that ensures people do not starve. Without work and against the demand of rents and profits, our demands must be to distribute according to need, to cancel rent, and to cancel residential utility bills. And after the crisis, to keep these canceled.

For a Non-Militarized, Self-Managed quarantine

In the face of a martial law dressed in medical gowns, what can we count on? Each other.

Regular people, people like you and me, are doing what they can to make sure that not only they survive, but to ensure the well-being of those around them, too. We see people practicing mutual aid, or as it is known in the Philippines, bayanihan. We see people making masks and medical gear, not for profit, but because there is a need for it. Mothers in Los Angeles are taking over abandoned houses in search of quarantine like Kadamay did in Bulacan. Neighborhoods all over the world are helping each other out by pooling together what little they have, and like the political dissident Jesus breaking bread and fish, are able to fill each others’ needs with the most shoestring of supplies. These are seeds for a future post-capitalist economy based on needs rather than profits.

It is clear we can expect no salvation from the state or capital. Against the quarantine with martial law characteristics, it is urgent that we forward a liberatory alternative based on solidarity and mutual aid instead of militarism and impunity. It is possible to have a self-managed quarantine that is not enforced with assault rifles. For example, residents among urban poor communities in Metro Manila have taken the initiative of setting up their own self-managed checkpoints, sans assault rifles and macho egos. In Hong Kong and Taiwan, quarantines are not enforced by force of arms but rather by the collective responsibility of everyone. A quarantine without coercion and violence is possible if we care to look.

Indeed, a better world is possible if we care to look.

2 thoughts on “Philippines: the opportunism of martial law”