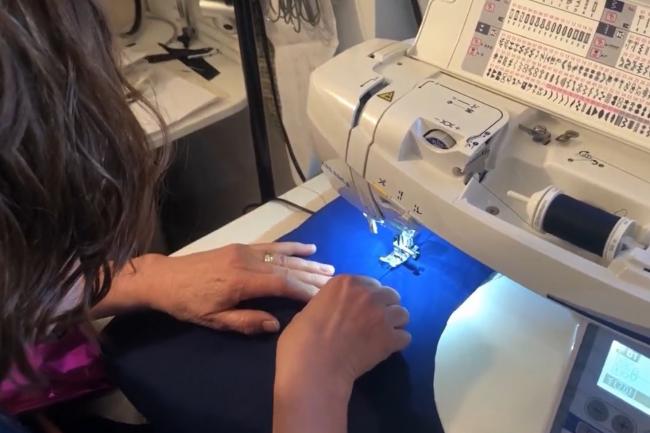 The following text was written by a friend of the ACG who is a volunteer of an autonomous scrub-producing unit.

Much like the elderly forced to walk laps and climb stairs to raise money for the NHS, the scrubs movement has been popularised by mainstream media as part of a ‘national effort’ at a time of ‘war’ fighting an ‘enemy’ we allegedly cannot see. We are being encouraged to paint rainbows and clap for the bravery of the health workers, when in reality we are sending them to their deaths. As of today (19/4/2020), at least 86 health and social care workers have died of COVID-19. The enemy is not invisible, it has been sitting in the leathered seats of parliament, imposing years of austerity which have left the health system bare to the bone; it has criminalised and worn down benefit claimants with strategies of surveillance, sanctions and deterrence; it has exploited the labour of key workers living hand to mouth, whilst endowing inessential services with bonuses, tax rebates and bailouts.

The current PPE scandal is no different.

At the end of January 2020 it was already clear that a country like the UK, which had been de-industrialised through decades of neoliberal economics, was not going to be able to cope with the demands for PPE. The Tories had a simple answer: “people are going to die” and their fellow eugenicists chimed about “herd immunity” and supposed facts based on “science”. And once again, the working class was put to slaughter. After years of vilification and abuse, they were placed at the knife edge of this crisis. COVID-19 is not the touted ‘great leveller’, it is disproportionately culling the elderly, the disabled, the poor, and BAME communities. 70% of NHS workers killed by COVID-19 are BAME. Workers who have been brought to the point of desperation and are starting to fight under the slogan “no kit, no care”, are facing suspensions and potential prosecutions for negligence if they fail to continue to work, in spite of a lack of protection.

We are now entering our fourth week of running one of the many autonomous scrub production units that have sprung up as forms of mutual aid across the country. We provide scrubs to all sorts of health workers who are lacking access to them in their workplaces. Staff who have had to perform C-sections on women wearing soiled clothes, scrub-less doctors bringing infections back to their family homes, workers on respiratory wards without protection, homeless nurses, social care providers looking after the elderly and disabled, trainee nurses sent to COVID wards wearing flimsy plastic aprons and bin bags. These are just to name a few.

Some of us are mothers, some of us lost our jobs, some of us just want to help or need something to take our minds off the crisis, and a large majority of us are professional seamstresses and tailors, providing an entirely unfunded service, save for public donations, across the entire country. A number of these local groups have up to 300 people, working from the safety of their homes. Delivery companies and independent workshops have offered their help in cutting and distributing fabric pieces to sewers, some of which are decentralised into smaller neighbourhood collectives, able to help each other out through the use of WhatsApp chats.

These local initiatives are sometimes receiving up to 1000 orders and are having to suspend taking more requests, as volunteers grapple with long hours, balancing paid and unpaid work. It doesn’t take much to realise that the network of these groups combined, exceed the workforce presently employed by large manufacturing companies, who have only recently received contracts to make changes to their production lines in order to deal with the demand for PPE.

There is no official scrub production in the UK. Scrubs are primarily made overseas, in countries such as China, India and Pakistan, often by informal labourers for extremely low wages. They are then entered into convoluted distribution systems and finally reach the hospitals which allocate the scrubs according to an equally tragic priority chain. Our particular scrub collective aims to remedy this by making them locally and delivering them directly to the health workers in need.

Many of these groups have managed to enter production with professional atomised systems within a week. You would think that we would be able to supply hospitals with stock, however we have been unable to contact procurement departments, who are often externalised from the main hospital sites and thereby have little connection to the health workers themselves. In fact I was told by union reps, that if I ever did manage to contact them, it would be a miracle. General managers in hospitals are likewise fairly unresponsive, and those who have responded, told us there was plenty of PPE, when in fact nurses on their wards couldn’t even access basic items such as masks. Some hospital trusts are accepting donations only and are failing to pressure those further up the chain to release funding for their production.

The absurdity of this dilemma runs deep within the heart of the capitalist system. While the government is engaged in international profit-wars, back in the UK, Deloitte has been approaching friends and well known textile brands such as Barbour and Burberry, in an effort to manage a temporary solution to the problem. Smaller scale manufacturers on the other hand, have heard nothing from the government after filing in their survey nearly two months ago, and instead are asking our scrub groups for material donations in order to start their production. Groups, who are at the forefront of providing immediate solutions to the problems, which more often than not, fall to women and their continuous underpaid and unpaid labour.

Burberry is expected only to start production in another week, other companies facing difficulties with the required certifications for water-resistant gowns are not to start in another two, at the very least. On the horizon is also a shortage of fabric, and the incessant greed of distributors who have hiked up even the cheaper cotton poplin to nearly half of its original price. Many are now resorting to use old duvet covers and bedsheets in order to make scrubs.

We also have to mention the struggles of our fellow workers internationally, such as in India, who are likewise fighting against the privatisation of hospitals; a lack of PPE; a lack of welfare provisions for informal factory workers, and a recent government decision to revoke the Factory Act of 1948, in order to standardise 12 hour working days, as Prime Minister Narendra Modi pushes to restart manufacturing in the middle of a raging pandemic. In Bangladesh the COVID infection rate is increasing faster than many hard hit countries.

We need to politicise the struggle with a clear internationalist response that unifies all of us, our work, our mutual aid and our care. For as long as profit rules, there can be no peace. We need to requisition all health, manufacturing and transport sectors and provide all workers, currently unpaid or paid with fair wages and safe working conditions. This is not a public relations crisis with seemingly unfortunate logistical difficulties, this is an emergency stoked by the greed of those for whom our deaths are only a motivation for the accumulation of their capital.