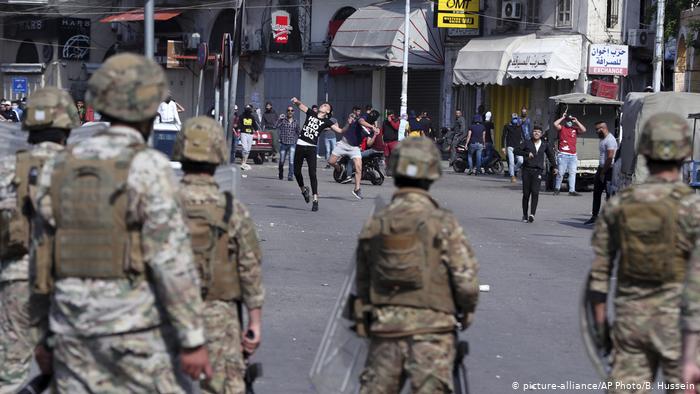 Once more protests have broken out in Lebanon over the ongoing crisis there, with soaring inflation and rising food prices. On Monday night, banks and ATMS were attacked in the northern city of Tripoli. A demonstrator in his 20s was shot dead. The following night banks had their windows smashed and were set on fire. The police responded with tear gas and rubber bullets, being answered by stone throwing by demonstrators.

The financial crisis has been aggravated by the coronavirus pandemic and by American sanctions against Hezbollah.

In Beirut, the capital, scores marched, some wearing medical masks, and calling for more people to join their demonstration. They chanted against the financial situation. Later crowds gathered to chuck stones towards the police massed in front of the Central Bank.

Lebanon has defaulted on its massive debt payments to foreign creditors and the regime of Hassan Diab wants to make the Lebanese masses pay for this with a “rescue” package. The Lebanese pound has plummeted to half its value since October. The Lebanese economy ranks among the most indebted in the world. The Diab government is the puppet of the Hezbollah Shiite militias, themselves backed by the Iranian regime and Syrian regimes, and the various billionaires of the different sects in Lebanon.

The banks are being targetted because they are not allowing people to withdraw money. In addition, many of the banks are owned by important politicians. Tripoli has been the epicentre of protests because of its high levels of poverty and unemployment. It was the scene of widespread protest last October.

Whilst ordinary people have been stopped from drawing out money and taking out foreign transfers, the rich have been allowed to withdraw $5.7 billion .

The situation in Lebanon continues to develop in a revolutionary direction.