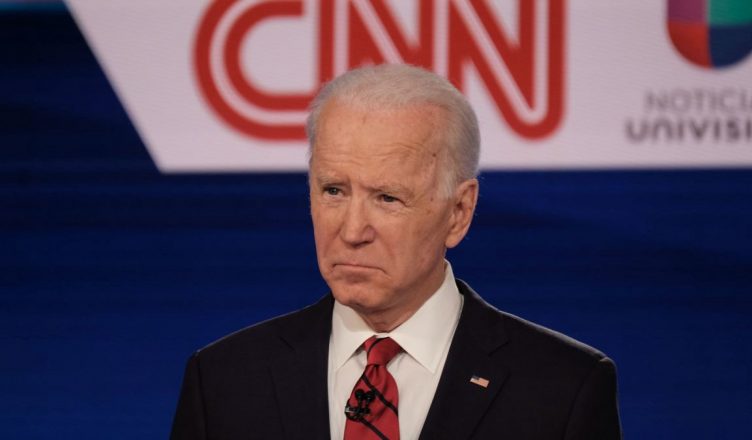 Noam Chomsky has gone on record as supporting Joe Biden, the Democrats’ presidential candidate in the forthcoming November election. Chomsky, who has described himself as a libertarian socialist and anarcho-syndicalist in the past, said that “the failure to vote for Biden in a swing state amounts to voting for Trump” akin to voting for the “destruction of organized human life on Earth, the sharp increase in the threat of nuclear war… stacking the judiciary with young lawyers who will make it impossible to do anything for a generation.” He said “With a Biden presidency, there would be, if not a strongly sympathetic administration, at least one that can be reached, can be pressured.”

In addition to this backing from the most noted left intellectual in the USA, we also have a letter signed by 65 “founders and veterans of the leading New Left organization of the 1960s, Students for a Democratic Society”. They too are urging younger radicals who refuse to endorse Biden’s campaign.

One of the most prominent of these clapped-out ex-radicals is Todd Gitlin, who previously had backed John Kerry for President in 2004. He told people demonstrating against the war in the Middle East to stop and to turn to the ballot box. He went so far as to say that the anti-war demonstrations in 1968 in Chicago opened the way for the election of Richard Nixon. For his part Kerry had swung in behind Bush’s war moves, as did Hilary Clinton and…Joe Biden.

Gitlin also supported the bombing of Serbia and the American attack on Afghanistan. Another signatory was Carl Davidson, now after his student radical days, firmly entrenched within the Democratic establishment. Like John McConnell in Britain who wanted to turn the various grassroots movements around housing, the environment, etc., into an apparatus for bringing Labour to power, Davidson envisaged the same with the anti-war movement in the USA, this time as a tool to bring the Democrats to power.

These ex-radicals congratulated Bernie Sanders for dropping out of the Presidential competition and then endorsing Biden.

What worries both they and Chomsky is that many of those who supported Sanders will not give their votes to a reactionary politician like Biden. They say they are “gravely concerned that some of his supporters, including the leadership of Democratic Socialists of America, refuse to support Biden, whom they see as a representative of Wall Street capital.” Both Chomsky and the ex-SDS leaders make the same analogies, that not casting a vote for Biden, would let in Trump again and would lead to a drive towards fascism in America. They echo Sanders himself, who has gone on record to say that not voting for Biden is “irresponsible”.

As Mike Davis, a contributing editor to The Nation magazine , who “reluctantly” backs Biden, had to admit, “I’ve also been in heated conversation with my students and my own younger children, still in high school. I can tell you that in their view of the world, beating Trump is not necessarily more important than stopping a ‘return to normalcy’ by the Democratic establishment”.

Biden has a long and reactionary record. As Senator for Delaware from 1973 to 2009, he opposed busing, that is the transporting of black children to schools to break up segregationism and racially integrate schools in the 1970s. He has consistently supported American imperialist adventures like the bombing of Serbia and the wars in Afghanistan and Iraq. For him Trump’s attitude towards China is not firm enough!

Biden has a close friend and economic adviser, the extremely dodgy Larry Summers. He was an associate of Jeffrey Epstein, paedophile and sex trafficker, is a hedge fund adviser and was in both Clinton’s and Obama’s administrations. As President of Harvard University, Summers argued that women were biologically predisposed towards underachievement in the sciences, which speeded up his exit as President of said establishment. Summers has campaigned vigorously against wealth taxes on billionaires and ultra-billionaires. This is the guy who is closely counselling Biden, who is now trying to make out that he is pursuing “progressive” policies.

Biden is now cuddling up to environmentalists, and has won the support of some. But his buddy Summers has always been a facilitator of climate change. When chief economist of the World Bank, Summers wrote that “underpopulated countries in Africa are vastly underpolluted.” He went on to say that more dirty industries should move into developing nations where they could have “very little direct health impact” and would save those industries money. In fact, wealthier countries do export dirty fuels to African countries. Summers also advised Obama on not transitioning from fossil fuels too soon. He also strongly supported the Keystone XL pipeline which cuts across the land of native American tribes.

Many women are concerned about Biden’s behaviour. Biden is a pro-life Catholic, and as such, abortion rights would be as much under attack as they are under Trump. He has voted 50 times, by his own admission, against federal funding of abortion. Many feminists who support the #MeToo movement and other initiatives against sexual harassment are concerned that several women have accused Biden of unwanted kissing and touching, and that one woman, who worked in his Senate office in the 1990s, has accused him of sexual assault. And yet Christina Cauterucci, a queer journalist with the on-line liberal magazine Slate, in her article ”Why Progressives Can Get Behind Joe Biden Without Losing Their Credibilty” has said that all of these misgivings must be cast aside because somehow if Biden becomes President he can be pressurised to change his views!

It was precisely Obama’s failure to deliver any of his promises to the working class, to black Americans and other ethnic groups and his involvement in foreign wars that led to the victory of Trump, who made the unkept promise that he would stay out of military intervention in the rest of the world. Under Obama, the standards of living of the mass of the US population carried on plummeting and the gap between the rich and poor widened massively.

It is not just leftists and liberals getting behind Biden but forty four billionaires and their spouses who are bankrolling his campaign. The Lincoln Project, a group of ex-Republican Party conservatives are endorsing Biden, as are Republicans like Jeff Timmer of Michigan, and Joe Walsh, who is on the far right of Republicanism and had the support of the Tea Party movement.

Large sections of the American ruling class are increasingly concerned that the demented antics of Trump are seriously damaging the premier standing of the USA. So it is no surprise really that both left and right are coming together to restore “business as usual” under the auspices of Biden.

There are increasing numbers, though, and not just among young people, who were mobilised by the Sanders campaign, who are not ready to back the establishment candidacy of Biden. Groups like the Democratic Socialists of America and the Jacobin magazine, which acts as a de facto organ of the DSA, are terrified that this substantial movement will start breaking with the Democrats and increasingly turn towards the construction of grassroots movement. The analogies with Britain are clear, where supporters of Corbyn like Owen Jones, Novara Media were quick to switch support to Keir Starmer.