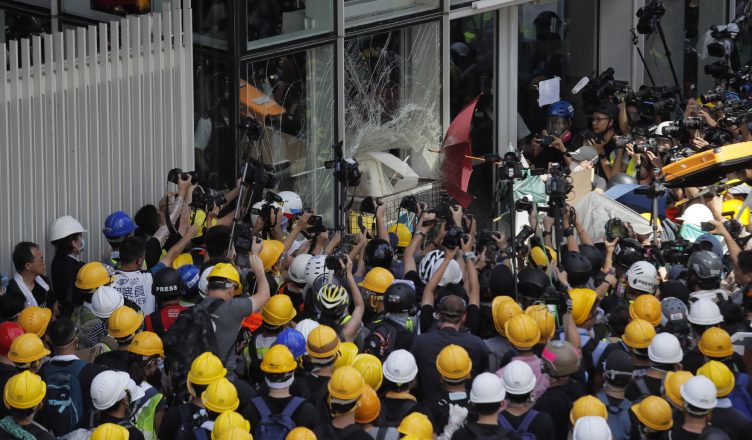 The demonstration of 1 million that we reported in a previous article was dwarfed by that on the following Sunday, June 16th, which numbered two million. The chief executive of Hong Kong, Carrie Lam, apologised for the extradition bill but stopped short of saying that it would be scrapped, although she said that it would not be revived during the current legislative session.

The huge demonstration was followed by a stay-away strike, most effective in schools and universities. Resentment against the extradition bill is compounded by the perception among many young people in Hong Kong of the vast gap between rich and poor. The actions of youth were reinforced by assemblies organised by groups of mothers, who supported their offspring and gathered crowds of 6,000.

On 1st July, which commemorates the anniversary of Hong Kong’s re-incorporation into China, over 500,000 demonstrated. At the same time demonstrators made an attempt to occupy the Legislative Council building. 500 demonstrators accomplished this at 9pm that night, spray-painting the building and then deciding to leave. They stated:

“We are protesters from the civic society. If there’s a choice, we wish we didn’t have to protest against tyranny with our own bodies, and didn’t have to occupy the Hong Kong Legislative Council as a bargaining chip in negotiations with the Government. But the Government has put aside all principles and procedures, ignored the demands of Hong Kong People, and repeated their lame arguments and lied over and over again. By facing with this rule and unreasonable government, we will have no choice but to fight back with justice, conscience and love of both Hong Kong and HongKongers.”

Carrie Lam attempted to caricature the occupiers as rioters, although they had behaved in an orderly way. The Hong Kong government has now made arrests, at the time of counting over 70 people being detained.

The movement is well-organised, with first aid posts, water and food supplies and an intricate system of communication via social media and mobile telephones. As one participant noted, it is based on decentralised and leaderless actions, facilitated by these new forms of communication.

The movement has inflicted several defeats on the Hong Kong administration, with the suspension of the bill, the dropping of charges against some demonstrators and a personal apology from Lam. If it is to succeed it must escalate its actions to scrap the bill. Against this are ranged the powers of the Hong Kong administration and the massed ranks of the police, with possible intervention from the regime in Beijing.

Lam had to admit the bill was dead in early July but there has been no formal withdrawal of the bill and the movement has vowed to continue their actions. They are also demanding an independent inquiry into the brutal methods used by the police on June 12th when tear gas and rubber bullets were deployed against the movement.

Some leftists have attempted to characterise the movement as right-wing and inspired by American and British imperialism. This reveals the blinkered and bankrupt attitudes of these individuals, who continue to defend the state capitalist regime of Xi Jinping as if it were some socialist paradise. Whilst there has been some involvement of right wing groups who have attempted to influence the movement, it remains one inspired by youth and workers, based on decentralisation, and opposed to exploitation.  In the medium and long term, the Xi Jinping regime sees the movement in Hong Kong as a threat to its power, with continuous demonstrations on the anniversary of the Tienanmen Square massacre, where many thousands were massacred by the “People’s” Army. The movement in Hong Kong has to spread to the mainland and the movement in Hong Kong needs to establish links with workers, peasants and students actions there.