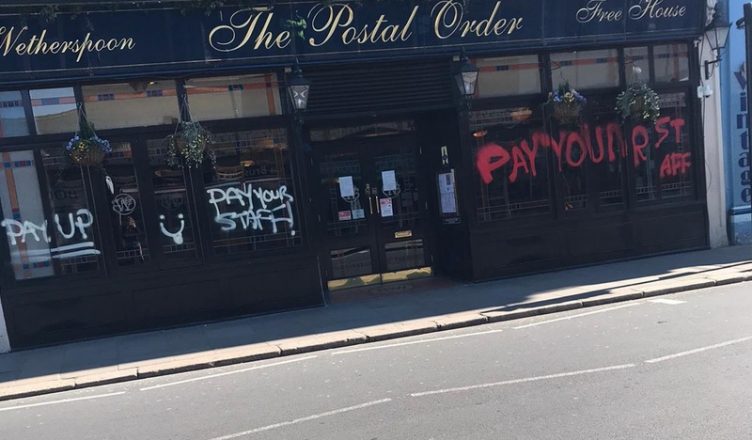 Take Richard Branson (Sir pronounced cur). He announced that staff at his airline, Virgin Atlantic, must take eight weeks unpaid leave as a result of the coronavirus crisis. He also cut sick pay from 6 months full pay to 3 months.

Following a wave of outrage, Branson was forced to dip into his $690 million personal fortune to fork out $250 million for a rescue package. He then begged the government for a handout of £5 billion to £7.5 billion of credit facilities. Branson earns £9.9 million alone on his £8 billion net worth if he secures a 2% interest.

Meanwhile his Virgin healthcare group has paid not a penny in corporation tax whilst being handed £2 billion worth of NHS and local authority contracts.

Another drooling social vampire is the boss of Wetherspoons, Tim Martin. Concerned about losing some of his profits, Martin was keen to keep his pubs and hotels open, whilst other businesses were closing, putting profit before health. With the closure of his pubs, he then counselled his workers that they should go off and get jobs with the supermarkets, to avoid him paying any sick pay. He refused to cover this for his 43,000 workers until the government gives him a handout, which may not be until late April.

Another ravening hyena is Sports Direct boss Mike Ashley. At first he said he was keeping his stores open because they were “essential services” (he meant a hole in his profits). He was then forced to reverse this decision. Thousands of Sports Direct workers are on zero hours contracts which means they receive no pay if they don’t work, and they will be paid for March but not after that.

Meanwhile, many US senators started selling stock off after receiving a briefing about the pandemic. Among these was the Senator for North Carolina, Richard Burr. As chairman of the Senate Intelligence Committee he received daily briefings on the spread of coronavirus. He sold off between $628,000 and $1.72m of his holdings, a week before the stock market crashed because of the pandemic. Burr and other Senators, both Republican and Democrat, chose to make money rather than warn the public about the looming crisis.

We need to finish with this sick society that breeds apologies for human beings like all of these, whose greed runs to the sociopathic, and create a new society, built on mutual aid, community and solidarity.