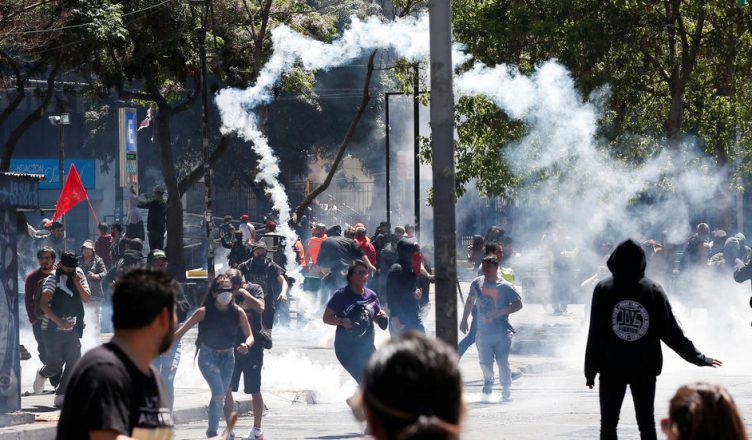 Since the uprising in Chile that began on October 18th (see our previous article, Chile – Rebellion and Repression, many have been tortured and murdered by the police and military with thousands of arrests. Many have been blinded by rubber bullets and there have been cases of rape and sexual abuse by the forces of the State, including a 14-year-old girl. Bodies have been dumped in supermarkets or set on fire to dispose of evidence of murder. Just as with the Pinochet coup, centres have been set up for the detention of protestors, the principal one being the Baquedano Metro station in Santiago. Twenty-six deaths have so far been reported, with 1,100 claims of torture and 70 reports of sexual abuse.

There was a two-day national strike that brought Chile to a halt, accompanied by huge demonstrations in Santiago and other major cities. The union bureaucrats tried to have a rolling programme of strikes in order to defuse the situation, starting with dockers and State employees but hundreds of thousands, including education workers and transport workers, joined the strike movement in late November. This followed two previous strike movements on October 23rd and November 12th.

There is huge opposition to the regime of Sebastián Piñera. In response he is contemplating a permanent presence on the streets of militarised police and the establishment of what is effectively dictatorship. The Socialist Party has colluded with the regime by saying that State violence was the same as that used by protestors to fight back, calling the latter “delinquents” and “vandals”. Eighty Socialist Party leaders signed a document condemning “minorities where lumpen and marginalized sectors coexist with criminal bands linked chiefly to drug trafficking and extremist and anti-system groups, highly ideologised and organised,” rather than the barbaric behaviour of the police and military.

Despite the repression the struggle continues. We should be aware that the Chilean Socialist Party’s counterparts in Britain will resort to the same tactics of siding with the forces of the State if there is ever major unrest here.