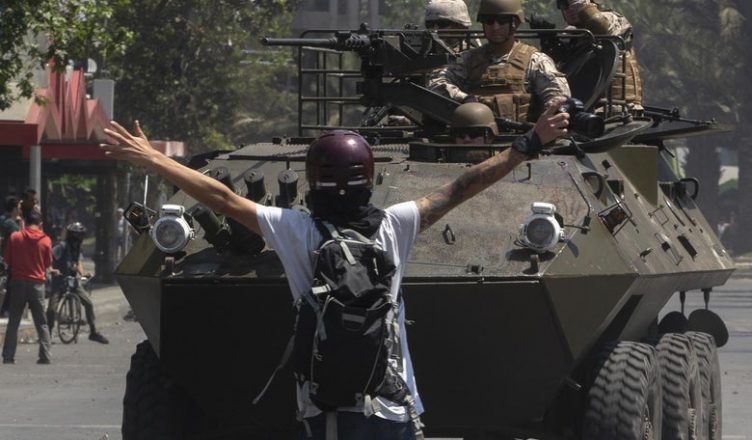 Since the bloody coup by General Pinochet in 1973, Chile has suffered decades of neo-liberalism, with services and pensions privatised, low wages and harsh labour laws. The anger at these measures came bubbling to the surface recently. The final straw was the big hike in the metro (underground) fares in the capital of Santiago which were announced in early October.

Young workers and students organised protests via social media against these fare rises. On Monday 14th October rallies were organised and large numbers of people jumped the turnstiles. This was countered by brutal police attacks. The following Friday, large demonstrations involving hundreds of thousands took place around the country, and demands escalated from the protest against metro rises to broader social demands. All 136 stations of the metro lines were shut down, and dozens burnt down. The offices of Enel also went up in flames. This is a private Italian firm that owns 40% of energy distribution in Chile. The offices of the pro-Pinochet paper El Mercurio were also burnt down.

The following day the government led by the billionaire Sebastián Piñera used the 1980 constitution created by Pinochet to announce drastic measures, a state of emergency including curfews in Santiago, Valparaiso and Concepcion. This was enforced by the Army and the militarised police. In addition, the main border crossing to Argentina was blocked over that weekend.

Thousands defied the curfews on the Saturday and Sunday. The tanks came out in Santiago. They were surrounded by protestors carrying placards with photos of those murdered during the Pinochet coup. Thousands of dockworkers took part in demonstrations as well as the copper miners, historically the most militant sectiion of the Chilean working class.

Piñera was forced to withdraw the most recent metro fare rise, whilst blaming “delinquents” for the unrest.

Despite this, the state of emergency continues, and over 2600 protestors have been arrested. This is the first time since the Pinochet days that the military have been deployed against protests and demonstrations.

As for the Stalinist Communist Party and the Broad Left coalition, they denounced the attacks on the metro stations, Enel and El Mercurio.

Eighty eight people have suffered gunshot wounds as the result of machine guns deployed by the military, sometimes disguised in plainclothes, At least two people have been shot dead.

The Stalinist controlled CUT union central called a general strike under pressure from workers. Meanwhile the Communist Party and the Broad Left stated that they did not wish to destabilise the Piñera government and only wished to make sure that it carried out reforms.

As unrest emerges around the world, in Chile, Ecuador and Honduras, Hong Kong and Catalonia, the ruling class turns to brutal violence and repression. Even the invoking of Section 14 against Extinction Rebellion here in Britain is a taster of things to come, if we decide that enough is enough and start to fight back.