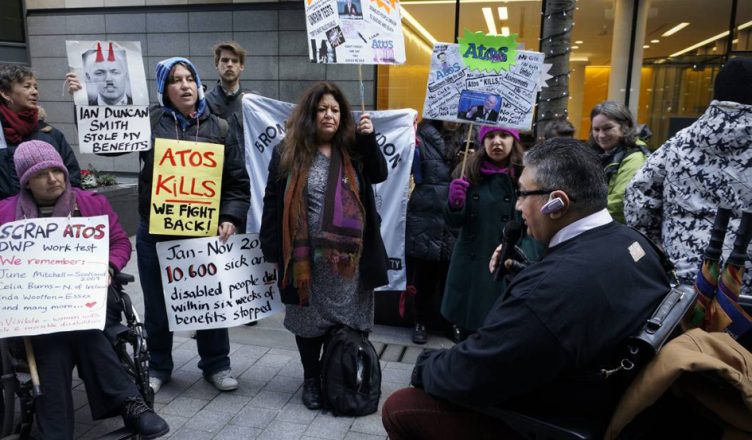 A comrade talks about his dealings with Atos assessment centres…

I have had the harrowing experience of visiting Atos assessment centres on two separate occasions. The first time I was required to do this was to support my girlfriend’s son for his medical assesment in 2014. My girlfriend’s son has Ehlers-Danlos syndrome, a degenerative hypermobility condition. The second time I had to visit an assessment centre was for my PIP (Personal Independence Payment) claim (I have Ulcerative Colitis and have had my large bowel removed). This was last year.

During my first visit I didn’t know what to expect but I use the word harrowing with good reason. We arrived and had to wait in a waiting room with other people that were due to have medical examinations. One of these people was a woman with brain damage that was accompanied by a carer. Whilst talking to this woman’s carer we learned that she was a nurse who had got brain damage by being assaulted at work. She needed assistance with being able to walk. Although we had heard about what was happening to people, this was still a disturbing shock. We were outraged and disgusted (and still are) that people such as that woman and her carer are forced into being called in to be assessed and that people are allowing this to happen in this day and age.

My girlfriend’s son had his assessment, and of course was deemed fit to work, despite suffering random pain and discomfort and only being able to do physical tasks for a certain period of time. He actually didn’t bother appealing, as he didn’t see the point.

My second trip to an assessment centre was more recent. I had put in my claim for PIP and was informed that I had an interview. The assessment centre is located in an out of the way location near a small industrial estate in Canterbury. If anyone was to protest or picket this place they would not be visible and so I think this sort of location is deliberate.

I was shocked to discover, when I turned up at the centre, that the staff were wearing Atos badges. After what Atos have done I assumed they were no longer operating in this capacity, how wrong I was! The staff put themselves across as friendly and there to help, which wasn’t convincing to me as an anarchist and shouldn’t be convincing to anyone.

After I was asked a series of questions at a desk I was told to wait in a waiting room. On the waiting room walls there were posters instructing and advising us claimants to behave ourselves and keep calm and not be rude or abusive to staff, again it was reiterated that staff were ‘only trying to help’ or some such nonsense. This instantly made me angry and irritated, but I was only to get angrier.

A young woman with a carer entered the building after a while and she was clearly upset as she was crying. I overheard her explain that she was in constant pain. Yet again I was appalled and outraged at the harassment of a claimant who clearly didn’t need this. I thought to myself what scum the staff in the office were and how unnecessary all this was. I didn’t get a chance to speak to these people and was called in to my interview, which of course I ‘failed’. I am now in the process of appealing the decision with the help of the Citizens Advice Bureau. Appeals are more successful.

There is no doubt that claimants need to come together and somehow fight back against this disgusting atrocity, an affront to civility and decency. I’m no expert on how to fight back but claimants need to somehow support each other in whatever ways they can and try and fight back, utilising direct action when possible. The sad truth is though, that I and others despair at a society where this is possible and certainly going through what I did can make a person feel hopeless. As an anarchist it just confirms the callous nature of capitalism but there is a sense that this shouldn’t be happening.

It is happening, no doubt, because of misinformation about claimants and the scapegoating of them by the ruling class, with the help of their media. We must highlight the truth as much as we can and clear up any misconceptions and lies spread by the ruling class. The sad and bizarre truth regarding Atos staff is that they actually think their jobs are necessary. How they cannot see the disgusting inhumanity of what they are doing, I don’t know, but they have clearly conned themselves into actually believing they are helping claimants, which I guess is part of the reason this is happening.