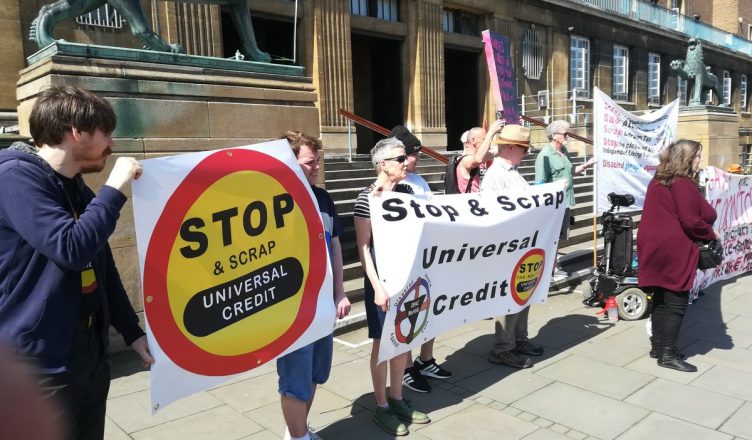 There are now 870,000 claimants for Universal Credit, the Government’s new flagship welfare scheme. By the end of 2018 the plan is for every area of England to be covered by this digitally based welfare service that rolls six different job-related benefits into one. It’s expected that 5.7 million households will be claiming Universal Credit by 2023. This includes the transfer of more than 2 million recipients of Employment Support Allowance (ESA), so there’s a very long way to go.

Yet even at this early stage of the programme, and after six years of trials and pilots with relatively simple claims, the badly-designed scheme is creaking and swaying. It’s working class households, the poor, the disabled and the low-paid who are already paying the cost of this failure.

As predicted by welfare rights activists, demands on food banks have increased four-fold in areas where Universal Credit has been fully rolled-out. The scheme’s IT system can’t cope with even current levels of demand, leading to unnecessary miscalculations and delays. Rent arrears have soared due to claimants being forced to wait five weeks or more for payments. Forty per cent of UC claimants are in arrears, the majority for the first time in their lives. Private landlords are refusing to accept UC claimants as tenants.

Some people put this disaster down to wide-scale managerial incompetence. We say it is a deliberate politically driven attempt to punish and criminalise the working poor. Through so-called austerity programmes we are being made to pay for the international crisis in banking finance that surfaced in 2008 and will re-appear yet again.

The Government had to print an extra £505 billion in “quantitative easing” to save its lords and masters in corporate finance from the effects of their reckless gambling. Not a single banker has been prosecuted for the 2008 crisis. Most of the extra public money printed has simply led to massive increases in house prices, rents, and the value of shares. Very little has found its way into new jobs and or even a modest rise in average wages. In the last ten years the UK has seen the longest period of declining real incomes in recorded economic history, which is back to the end of the Napoleonic Wars. In contrast, the amount of bonuses paid out in the UK finance sector last year was over £15 billion.

As well as claimants themselves, other people are starting to take notice. There’s the possibility of change and resistance in the air. Stories are appearing in the local and national press virtually every day about Universal Credit and its iniquities. A House of Commons Select Committee is desperately trying to shore up the scheme. In response to numerous court cases the DWP is on the back foot, forced to repay some claimants and moderate the rules for others. Groups of claimants and their friends are banding together locally to help one another and publicise the scheme’s failures. Unite the Union and a number of DWP staff have followed the lead of Disabled People Against the Cuts and are calling for Universal Credit to be scrapped.

The Government can find (i.e. order the Bank of England to print) £505 billion to save a few banks. That’s more than £7,500 for every woman, man and child in Britain. Clearly, the government has no interest in scrapping Universal Credit and wiping out record levels of household debt instead, not unless they are forced to do this.