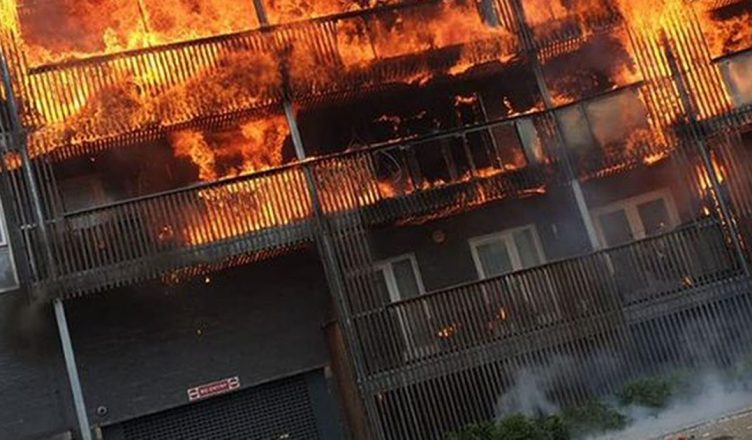 A fire that engulfed Barking flats on Sunday June 9th could have been avoided. There had been concerns among residents before the fire. Peter Mason, chair of Barking Residents Association contacted  the builder Bellway Homes in early May about fire risks after a BBC Watchdog programme spotlighting fire safety hazards at two other Bellway Homes sites.

Bellway told him not to worry. On Sunday the fire swept through wooden cladding and destroyed 20 homes and possessions. Another 10 flats were damaged by the fire. Two residents were treated for smoke inhalation.

This is exactly the same scenario as Grenfell, where residents’ concerns about fire safety were consistently ignored. The only difference is that whilst 72 people died at Grenfell, there were no fatalities at Barking.

Politicians including the Housing Minister, Kit Malthouse, and Theresa May herself spouted a lot of rhetoric after Grenfell that fire safety would be urgently addressed. This has proved to be empty words, as working class residents’ concerns continue to be ignored.

SAT 22ND JUNE:  HOUSING AND LAND IN RBKC
A day of workshops, talks and film, looking at the housing crisis in the borough. Hosted by Save Earls’ Court Supporters Club, Save Silchester, THINK, and Westway 23, supported by RHN. Tickets here:
https://www.eventbrite.com/e/housing-and-land-in-rbkc-tickets-62845738295