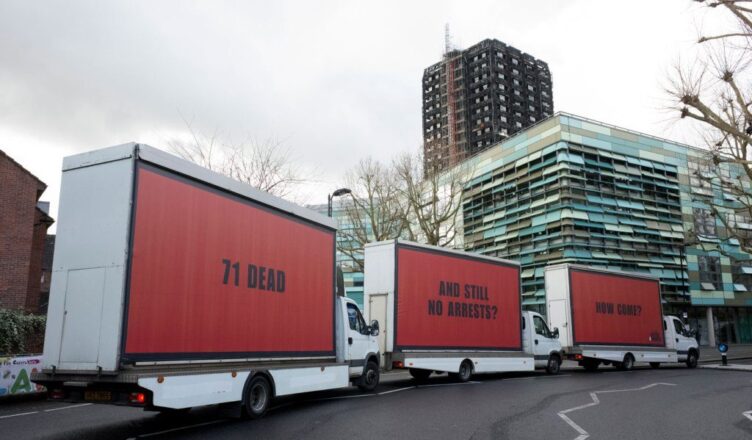 Last Sunday was the third anniversary of the fire at Grenfell Tower that killed 72 people.

They died because the building was fitted with cheap cladding that was easy to ignite.

Those responsible for this disaster were Kensington and Chelsea Council and their Tenant Management Organisation.

The inquiry set up by the May government has proved to be a whitewash. It allowed those guilty immunity from prosecution. The Attorney General has stated that any statements at the inquiry cannot be used as evidence against the guilty parties. Instead of identifying these people, the inquiry concentrated on the failure of the London Fire Brigade to tackle the blaze. Brave firefighters who did their best to fight the blaze and save Grenfell tenants were made culpable, rather than those responsible.

Last year the government said that dangerous cladding would be removed from all buildings by this month.

But in April, at least 21,000 households still had the dangerous cladding. In March the Chancellor of the Exchequer, Rishi Sunak, announced the setting up of a £1 billion fund to remove the cladding but with no deadline for this removal.

Justice4Grenfell, composed of Grenfell survivors, backed up by various celebrities, has demanded the setting of a timeline.

The threat of repeats of a disaster like Grenfell is very real and yet next to nothing has been done. Over 300 similar high-rise fire traps like Grenfell still exist. This does not include other kinds of buildings with similar cladding. There are 11,300 of these, 1,700 of them designated as high risk.

The Housing, Communities and Local Government (HCLG) parliamentary committee commented that it was “deeply shocking and unacceptable that, three years after the Grenfell Tower fire, there are still 2,000 high-risk residential buildings with dangerous cladding”.

The £1 billion fund set up by Sunak goes only a small way to sort out the dangers, as the HCLG committee estimated that it would take as much as £15 billion to rectify the situation.

Guilty: Boris Johnson. When Mayor of London Johnson put through cuts including the closure of ten fire stations and the loss of 552 firefighters’ jobs despite pre-election promises not to do so. When questioned over this at the Greater London Assembly he said: “Get Stuffed”. The loss to the fire services meant a slower response time to the fire, with fire teams having to be called in from outside London.

Guilty: Kensington and Chelsea Council. They repeatedly ignored warnings for years from residents about fire hazards. They attempted to close down a blogger, Francis O’Connor, member of the Grenfell Action Group (GAG) after he warned about fire hazards at Grenfell. They sent a lawyer to threaten him, which he ignored. Nicholas Paget-Brown, leader of the council, attended a private dinner to which he was invited by organizers of the MIPIM (property developers’ event) conference in 2015. The council has had plans to cleanse the residents and build luxury flats in the neighbourhood for the last three years. Now Paget-Brown is trying to put blame on the residents by falsely saying that they objected to water sprinklers.

“We believe that the KCTMO have ensured their ongoing survival by the use of proxy votes at their Annual General Meeting that see them returned with a mandate of 98% in favour of the continuation of their inept and highly dangerous management of our homes” and that “It is our conviction that a serious fire in a tower block or similar high density residential property is the most likely reason that those who wield power at the KCTMO will be found out and brought to justice! The Grenfell Action Group believe that the KCTMO narrowly averted a major fire disaster at Grenfell Tower in 2013 when residents experienced a period of terrifying power surges that were subsequently found to have been caused by faulty wiring. We believe that our attempts to highlight the seriousness of this event were covered up by the KCTMO with the help of the RBKC Scrutiny Committee who refused to investigate the legitimate concerns of tenants and leaseholders.” (this was written in November 2016!) KCTMO was given a “deficiency notice” in 2016 by the London fire brigade after an audit at another of its properties.

Guilty. Gavin Barwell, who became Theresa May’s chief of staff, the then Housing Minister in 2013 promised to review part B of the Building Regulations 2010, relating to fire safety, but the review never happened. This was after the fire at another tower block, Lakanal House in Southwark in 2009 that killed six people.

Guilty. Brandon Lewis, another Tory Housing Minister who sat on information about fire risks at blocks like Grenfell because it would “discourage building”. He waved away suggestions about installation of water sprinklers in 2014 saying it was “all red tape.”

Guilty. The Conservative government itself and back bench Tory MPS who voted against a motion to make “homes fit or human habitation” in 2016 with a clause to undertake regular electrical checking. Among these were 72 MPs who are also landlords, including the Police and Fire Minister Nick Hurd. The then local government minister Marcus Jones said it “would result in unnecessary regulation and cost to landlords”.

But GUILTY most of all is the whole class system, capitalism itself, that for decades now has unleashed the policies of neoliberalism on the working class, policies of the unbridled market, policies of austerity, policies of vicious attacks on social services and what is the robbing of the poor to make the wealthy even wealthier. This system should be sentenced to death.