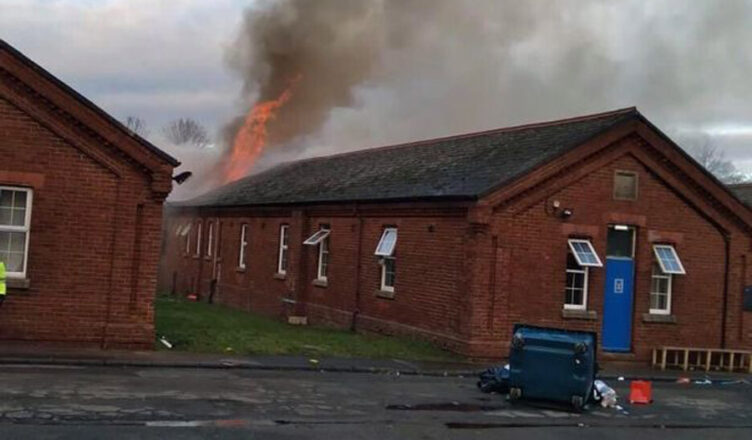 After months on end of being treated with contempt by the UK government and being forced to stay in inhumane conditions, the inevitable has happened. A fire broke out yesterday at the Napier Barracks site in Folkestone, Kent (a site that the Home Office has used to house asylum seekers in appalling conditions). No injuries have been reported. The residents of the site received news yesterday from Clearsprings, the private company in charge of the Napier Barracks, that they would be confined at the site, where they don’t want to be, to self-isolate for another ten days. For the residents at the site this was the final straw and for those not yet infected with Covid 19, the news that they would be locked inside and at risk of infection for a further ten days was just too much. There has also been virtually no treatment for those at the site with Covid 19.

The grim and cruel reality of conditions at the site, combined with the outbreak of Covid 19 (created and exacerbated by such conditions) proves what many have said all along, that the barracks have been an unsuitable place to house the residents. One in four people at Napier Barracks had tested positive for Covid 19, which is no surprise considering the cramped conditions and inadequate facilities at the site, which have caused some residents to go on hunger strike and attempt suicide, and were the cause of protests at the site for months. For a long time now many people have called on the government to house the residents at the site in good, safe and liveable housing and for those stuck at Napier barracks not to be treated inhumanely.

Yet the government have stubbornly had other ideas. The Home Secretary, Priti Patel, and local Folkestone and Hythe Conservative MP, Damien Collins, have shown again their racist, scapegoating blame-shifting , contempt and lack of responsibility by issuing statements yesterday that fuel racism and falsely try and put the blame on the residents of Napier Barracks for their own harrowing predicament. This is a dire and callous predicament caused by a callous government and their media, who use asylum seekers for their own political ambitions.

It should also be noted that, even when used to house soldiers, Napier Barracks had a reputation with soldiers as very basic accommodation that they didn’t want to stay in for long at all, it being just about bearable if soldiers were out on training for most of the day. It’s worth remembering such things when Priti Patel tries tapping in to sentiment that evokes emotions connected to the soldiers using the barracks in the past, a purely ultra-nationalist, manipulative move.

Despite how the likes of Patel and Collins want to spin this, what happened at the Napier Barracks site yesterday is the inevitable result of what happens when people have had enough of callously being treated like dirt by those in power.