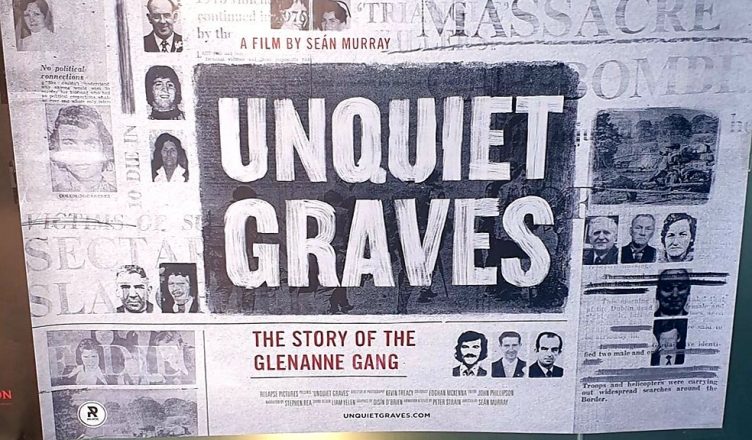 Unquiet Graves, the new documentary from Irish filmmaker Sean Murray, is an important work on several levels.  It Informs the viewer of state collusion, indeed state sponsorship of sectarian murder gangs in Northern Ireland in the 1970s. It highlights this activity before the events get lost as ‘tragic history’ and it seeks some semblance of justice for the families of the victims of security services – directed paramilitary murder.

The film begins with a re-enactment of the murder of two young men, Colm McCartney and Sean Farmer, in 1975. Returning from a Gaelic football game in Dublin, the two were stopped at a ‘British Army’ checkpoint near the village of Newtownhamilton in County Armagh and shot dead. This murder, which came three years into the sectarian murder campaign, is returned to, with great poignancy in animated form later in the film.

A large part of the film’s content is based upon more than 15 years of research undertaken by the Pat Finucane Centre, a human rights advocacy organisation in Northern Ireland, much of which was published in the book Lethal Allies: British Collusion in Ireland (2013). The book catalogued the concerted activities of the Loyalist paramilitary Mid Ulster Volunteer Force (UVF), elements of the Royal Ulster Constabulary (RUC) and the locally recruited Ulster Defence Regiment (UDR), part of the British Army in what became known as the Tyrone-Armagh Murder triangle.

Much of the evidence of collusion was provided by one of the active participants, John Weir. Weir, was a sergeant in the RUC’s Special Patrol Group (SPG) counter-terrorist section and member of the UVF. His 1999 affidavit outlined in detail the consistent collusion between security services and Loyalist Paramilitaries in the Murder Triangle and beyond.

The modus operandi was to select ‘soft’ targets, concentrating upon ‘respectable’ Catholic individuals and families without connections to the Republican movement. The highest profile killings were that of members of the Miami Showband pop group in July 1975, but that was an exception. The targets would be chosen, the surveillance and logistic support provided by the security services and the murders carried out by a mix of off, and sometimes on-duty RUC men, UDR soldiers and UVF members. RUC roadblocks, which were normalised in rural Tyrone and Armagh, were sometimes set up to prevent witnesses. The nominal RUC investigations into the murders returned a 100% failure to convict. Patently, the campaign was being given the go ahead by officials much further up the chain of command.

The Glennane Gang extended their operations into the Irish Republic, planting bombs in the border town of Dundalk and were responsible for the infamous car bombings of Monaghan and Dublin in May 1974 which claimed 34 lives. They undertook this operation as they did many others between 1972 and 1980, with the height of their killing between 1974 and 1976, in a state of heightened confidence that they were protected by important sections of local and national law enforcement. In total the gang has been connected to more than 120 murders. Most of their atrocities were claimed in the name of the Protestant Action Force, occasionally the Red Hand Commando – itself a part of the UVF or remained anonymous.  Their intention is generally believed to have been to spread terror and panic amongst the Catholic/Nationalist community in the hope that this would provoke the Provisional IRA, then on ceasefire, into tit for tat killings. This did, to a limited but bloody extent, happen when the  Republican Action Force murdered 10 Protestant building workers at Kingsmill, South Armagh in January 1976, which is highlighted in the film.

Following this sectarian revenge attack, the Glennane Gang formulated a plan to massacre Catholic school children and their teachers in the Armagh village of Beleeks. The intention can only have been to escalate the situation into open civil war, drawing in the Republican movement and forcing the hand of the British state and any reticent Loyalists.

However, the leadership of the UVF, who were contemporaneously turning a blind eye to the horrifically brutal Shankill Butchers, were unwilling to sanction the slaughter of innocent primary school children and the inevitable international condemnation it would have brought.

There are ongoing attempts to uncover the full truth about the Glennane Gang and its connections to the secret, and not too secret, state, attempts which have been hampered at every turn, despite the Good Friday Agreement,  and the ostensible embracing of openness and reconciliation.

The documentary gives an opportunity for the perspectives and voices of the victim’s families to be foregrounded and the interviews with the relatives of those murdered are moving and powerful. The struggle for the truth about collusion and state terror continues.