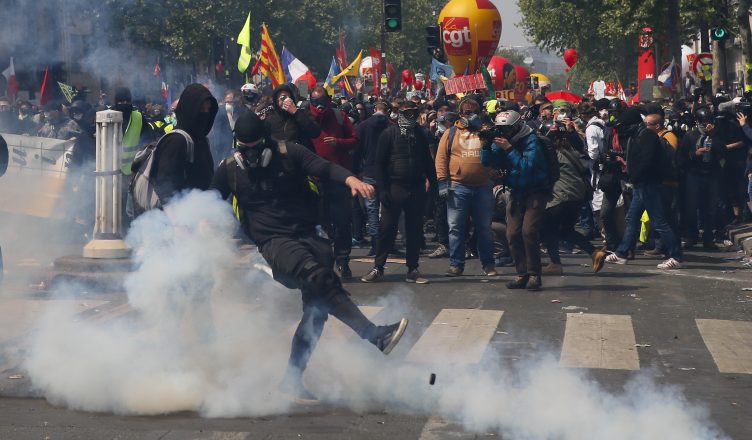 In France there were many large demonstrations in cities and towns, In Paris, there was a march of some 2,000 anarchists on the morning of May 1st. This was followed by the main march with a turnout from the usual unions and left parties, but with also the turnout of both feminists and Gilets Jaunes (Yellow Vests) who are increasingly radicalising. This was met with a massive police presence, who attacked demonstrators with batons and gas.

In Colombia, there was a large anarchist presence on the May Day demo in Bogota.

In Chile there were brutal attacks by the police on demonstrators.

In El Salvador, there was a large anarchist bloc on the demo in San Salvador.

There was an anarchist presence on the demonstration in Helsinki, Finland.

In Bangladesh the Anarchosyndicalist Federation organised a large event.

In Sweden twenty anarchists protesting against the government’s plans to clamp down on strikes were brutally arrested.

In Turkey, despite the severe repression there, large numbers of anarchists under red and black flags turned out.

In Germany in Berlin, police attacked a demonstration of twenty thousand, who chanted “The streets are ours” and “anticapitalism”.

In Italy, police attacked a demonstration against a transalpine high speed train tunnel.

In Greece there was a 24 hour strike of transport workers, including ferry, tram, train and bus workers.