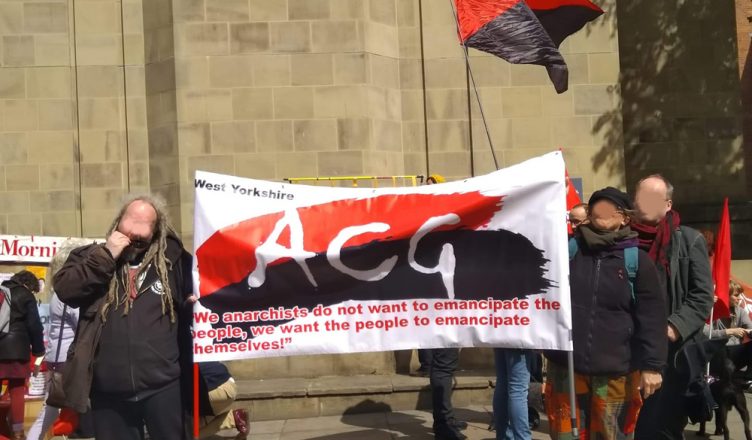 Here’s what we’ve got back from members so far…

ACGers in London attended the capital’s main May Day demo. The march set of from Clerkenwell and the vibe was very much TUC meets global Stalinfest plus Ocalan/PKK personality cult loyalists. At the Parliament Square rally, there were also more Momentum types as well as Extinction Rebellion people. There were the usual speeches from various on the left and trade union movement, such as Matt Wrack (FBU) and Ash Sarkar (Novara journo). Our friends from the CWO were also handing out their paper Aurora. Sadly, apart from ourselves, there appeared to be no presence from any of the other UK anarchist and libertarian organisations. AGC members meanwhile shifted a fair few copies of the latest Jackdaw and introductory ACG flyers, which generally seemed to be enthusiastically received and led to a few discussions about anarchist communism.

There was nothing happening in Leicester on Wednesday 1st May but on Saturday 4th May, ACGers attended the march and rally organised by the Trades Council. A ‘bijou’ affair – this event could really do with better publicity. Hint, loads of people say this every year. Aside from the usual Labour Party, trade union and assorted capitalist left regulars, the IWW was in attendance, as were the CWO with Aurora. Again, ACG members shifted a fair few Jackdaws, though we did get a couple of snarls from grumpy Labour Party people who didn’t seem to appreciate the ‘Neither Labour nor Tory’ headline.

Our newest group in West Yorkshire were particularly keen and attended May Day events on both Wednesday and Saturday (see picture). The first was a small May Day celebration in Bradford organised by the 1 in 12 Club. On Saturday they attended the TUC May Day march in Leeds, at which West Yorks ACG and friends took their new banner and a flag along. After the usual boring vote Labour speeches they were told to assemble behind the brass band, which they did. They were then approached by TUC stewards and asked to go to the back as Trade Unions were supposed to be at the front. The ACG refused saying if they wanted to go in front of us they could. Apart from a small Unison contingent everyone else lined up behind the ACG. Our members were approached again and asked to move to which one of our members said ‘it is nice to see the authoritarians and statists out in force’ at which point we were left alone near the front of the march.

The ACG were joined by members of Red and Black Leeds and marched through Leeds City Centre together, where they received the most support from the public, with many people both on and off the march wanting pictures of the ACG banner, people saying how pleased they were that the ‘anarchists had turned up’ and people clapping us (rather than just the march).

Overall the ACG was well received, had a few queries, were praised for being ‘anarchists’ and told that it was ‘nice to see the anarchists back’. The ACG also gave out Jackdaws and other ACG leaflets which were well received.