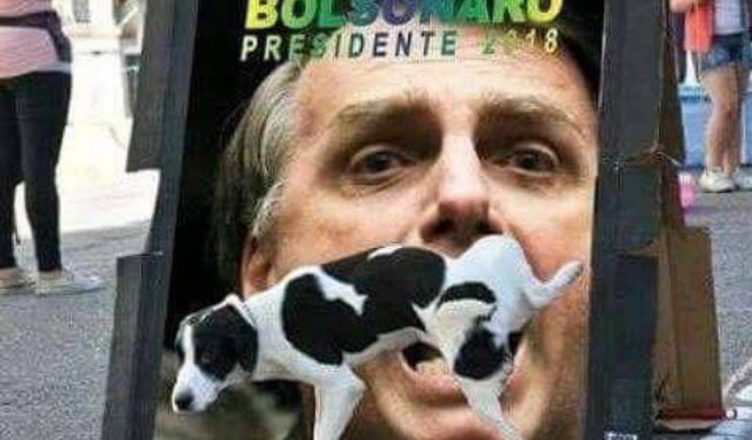 Statement from Brazilian anarchists on the election of Bolsonaro.

The current Brazilian political scenario requires a lot of lucidity and coolness for all popular organizers and their analysis of reality. We of Coordenação Anarquista Brasileira (Brazilian Anarchist Coordination) modestly seek to give our contribution to the understanding of the convulsing social and political situation, which is defined by the legal-parliamentary coup that deposed Worker’s Party (PT) President Dilma Rousseff from office. We recently experienced the breakdown of the so-called New Republic agreement from 1988 [1]. This pact maintained social exclusion of those at the bottom, at the same time it guaranteed minimum legal rights, in a coalition involving bourgeois politicians, corporations, the armed forces and part of the reformist sectors of the Left.

The construction of the Brazilian State, however, has always been closer to the interests of the imperialist shift powers than to its own population. The State has always criminalized the poor as a norm of institutionalized bourgeois democracy. The PT led governments since Lula have increased the criminal machine of public order operated by the entire legislative and judicial apparatus, reproducing the super-incarceration of the poor and Black population, as well as sustaining a repressive apparatus that attacks social struggles.

The so-called pact of class reconciliation was broken and the collaborationist agenda [of social compromise] was torn apart to be replaced by an agenda of financialized capitalism. These have replaced things such as social rights, relative freedoms and public services, which we should remember were historical achievements of popular movements.

The Empire Shows Its Claws

We cannot understand the current historical moment in our country isolated from the geopolitical reality of the Latin American continent. We need to calibrate our analytical tools and better locate Brazil as a peripheral nation within the world-system to understand what is at stake. The country has continued to maintain its primary industry of agro-exports and has aligned itself with the IIRSA Plan (Initiative for the Integration of  South American Regional Infrastructure, now called COSIPLAN). [2] This plan sought to maximise the exploitation of our natural resources and speed up the process of supplying international markets to the benefit transnational corporations.This plan is a new offensive aligned with free-trade treaties established between United States and countries in the region. It’s an attempt to expand the neoliberal model in South America, supported by progressive and center-left governments.

The crisis of 2008 created major difficulties for the US to maintain their international agenda, which since the fall of The Twin Towers [the WTC 9/11 attack], began to present as the main objective the guarantee of their global hegemony which is evident by numerous aggressive military interventions by the empire. It’s also evident that imperialism guides itself by the idea that “where Brazil goes, Latin America will go as well.” It’s clear our continent, Latin America, is seen as a strategic reserve of resources (political, natural, energy) for the use of US, which makes the political situation of Brazil so important to Washington.

The coup of 2016 did not only disassemble the small gains from the previous period as it made the financial and international control of the national economy stronger, by purchasing “assets.” These adjustments are required to be made by the judicial class, especially the judges themselves, which can be seen by the fact the Lava-Jato investigation [3] is aligned with imperialism, by using the strategy of lawfare. [4] It also increases the control of infrastructure, renewable energies, service, health and education by North-American and Chinese corporations. In regards to oil, 13 multinationals have already appropriated 75 % of the pre-salt [oil below the ocean surface], especially, Shell and BP, whose last auction rounds took place in October this year. From a political point of view, the action of imperialism is to disrupt any possibility of the Brazilian situation (even if it’s governed by a center-left reformist government) to represent any threat to its interests at continental level. It is important to clarify that the outcome of the current electoral race will significantly impact the crises of Venezuelan regime, possibly contributing to political destabilization, or even the possibility of military intervention.

The New National Security Doctrine: Politics and Threats of the Military

It must be pointed out that some years ago, while under Lula’s Workers Party government, a new National Security Doctrine was inaugurated with General Etchegoyen of the Brazilian armed forces [appointed as Secretary of Security by Temer]. This doctrine sees groups linked to drug trafficking, human rights or environmental NGOs, “ideological” government agencies, and social movements linked to a left vision as being new internal enemies. Other elements of this doctrine is the emptying of the role of university and research, a tougher stance of the penal code, continuity and expansion of mass incarceration, and adoption of counter-espionage measures. The doctrine uses means of social communication control, the spread of rumors, discrediting of accusers and the use of false documents. The promotion of strikes, road closures, occupation of lands and buildings and the struggle for social rights for political minorities are characterised as “terrorist actions.”

It was this new doctrine responsible for the anti-terrorism bill approved by Dilma. Its goal was to create a new pact, a “new democracy,” where the military play an active role in the geopolitics of the continent and national politics.

To summarize: The “Democratic State of Law” [5] is mounted on top of a state of exception for the “dangerous classes ” is now in the process of reconfiguration in the power plays of the dominant classes (in some places, the narco-state), and makes it emergence from reasons interior to the state and its relations with the interests of imperialism. Under these circumstances, reaction factors operate as a police State.  An adjustment that cuts so deep into the flesh of the people and deeply increased the ambitions of the capitalist class and its lackeys, sooner or later, calls security in their favor and extends the space of the exception to redefine the normality of the system.

The Center-Left Bets All Their Chips At the Polls

The Brazilian left and center-left bet their luck at the ballot box expecting bourgeois democracy to come to their rescue, protect their rights, and limit the strangle and defeat of imperialism. While the system lifts the gun sight and wears the toga or the uniform to exercise power, it is always with support from the US government. The opposition movements on the left which emerged after the legal-parliamentary coup, and which took the streets, now unfortunately enters into this pragmatic logic of the state and government, where the enemy of the far right-wing would be supposedly won by the ballot box and vote.

The center-left strives to channel these efforts into electoral build-up by spending all its energy with the institutional dispute and the rotten game of electoral parties, to the detriment of class struggle. The Brazilian political scene is tainted by the fraud of a representation which for the bourgeois liberals has always been a mechanism of usurpation of collective forces and common goods by the powerful will of minorities. But we know that the system twists the constitution and melts the rule of law when it comes to defending the interests of its dominant classes.

We must build a long-term work that points out the unions and popular organizations as the most correct alternative for the people to defend their rights and participate in political life and by deepening direct democracy, repudiating the reconciliation of classes, and giving combat without truce to proto-fascism.

Proto-Fascism as a Super-Dose of the Elite Program

Such configuration of political power is also supported by propaganda tactics and direct action from reactionary sectors and ideologically affiliated groups on the far right which are generally backed by law enforcement. A factor that gains incidence in the streets and that everything suggests that it will grow, making space for its agents to repress the national political scene and align it with what is happening at continental level.

But there is more. Coming together with this is economic frustration, the failure of political solutions through representation, and the destabilization of values associated with positions of power in family, culture, and education. We also see a conservative subjective production which uses religious evangelicals as a popular base for distribution. This new right transitioned from anti-PT rhetoric to a radicalized anti-political and anti-system rhetoric, setting itself up as a right that does not speak only to the elites, but also to the popular and peripheral sectors. They act in the social vacuum left by the center-left, which puts itself only in defense of bourgeois democracy.

The despicable figure of Bolsonaro is part of this attempt to deepen the destruction of social rights and the patriarchal violence against women, LGBT, indigenous, Blacks and maroons. Violence that materialized in several attacks throughout the country lead by Bolsonaro supporters, among which one that resulted in the brutal murder of Capoeira Master Moa of Katendê in Salvador. [6] Far from minimizing the barbarity that Bolsonaro represents, it is necessary to place him within the logic of the application of the adjustment [neoliberalism], of the imperialist recolonialization of the country at a faster pace than it would be under a center-left government.

The Polls Do Not Beat Imperialism, Tax Adjustment and Proto-Fascism!

The result of the elections therefore does not solve the complex context posed by the correlation of forces opposed to the working class. All scenarios only serve to deepen the class struggle and against oppression. The “useful vote” against the Bolsonaro sheet makes at most an extension, leading to a “third shift” that will not be decided at the polls. The struggle is long-term to build a class and mass alternative that does not surrender to the reasons of state, governability and agreements subordinate to the empire.But it must also be a social force capable of defeating the bourgeoisie, imperialism and its attacks.

Our class flags need to be lifted up at this time of proto-FASCIST AND NEOLIBERAL ATTACK. We must not succumb to the panic and fear caused by the reactionary elites. Our role is to actively resist, strengthen class solidarity, ensure the fight in the streets, and the permanent mobilization of from below!

The Strength of the People Can Stop Fascism! Against the Neoliberal Barbarism, Struggle and Organize!

This article was originally published on Freedom website here:  https://freedomnews.org.uk/the-claws-of-empire-the-rise-of-fascism-brazilian-anarchist-statement-on-bolsonaro/

To read more on the political situation in Brazil we recommend “Interview on the Assassination of Marielle Franco” and a statement by the CAB “Marielle Franco, Presente! – Political Murder and State Terrorism in Brazil.”