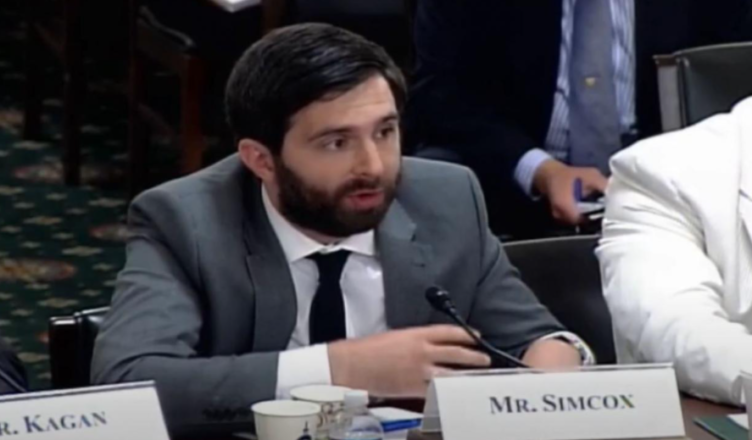 Simcox has many connections with the far right. He is a former Margaret Thatcher Fellow at the Heritage Foundation, a right wing think tank closely linked to the Trump administration. He spoke at a meeting of the racist and anti-immigrant Center for Immigration Studies (CIS) in 2019. This group regularly publishes anti-Semitic and white nationalist texts including material from Holocaust deniers and eugenicists.

Whilst at the Heritage Foundation, Simcox promoted racist theories as for example the Great Replacement, which proposes that ‘native’ white populations are being replaced by ‘non-white’ immigrants. Chief among the theorists promoted was Lorenzo Vidino, who believes that the American Muslim population is a front for the Muslim Brotherhood.

Vidino is an American academic with links to US far-right groups. He has gone on record as stating that “Europe, as we knew it 30 years ago, is long gone. Demography doesn’t lie: in a couple of decades non-ethnic Europeans will represent the majority of the population in many European cities and a large percentage of them will be Muslim.”

Simcox has close links with Katherine Gorka, who was a senior official in the Trump administration. Gorka herself promotes far-right conspiracy theories and contributed to Breitbart News which was set up by the far-right propagandist Steve Bannon. Gorka’s husband is Sebastian Gorka, who served as a senior advisor on counter-terrorism before he lost his job when it was revealed that he supported and was a member of several anti-Semitic groups in Hungary.

Simcox has also cited and promoted other right-wing conspiracy theorists like Steve Emerson and his Investigative Project on Terrorism (IPT) and Zuhdi Jasser and the Clarion Project.

Emerson gained publicity when he described Birmingham as a no-go zone for non-Muslims, to which David Cameron responded by calling him “an idiot”. The Center for American Progress states that he has “a history of fabricating evidence that perpetuates conspiracies of radical Islam infiltrating America through Muslim civil rights and advocacy organisations.”

The Clarion Project, where Jasser has an advisory role, has published material claiming that “deporting millions of Muslims maybe necessary” from Europe.

Mark Potok, a former Southern Poverty Law Center senior leader for 20 years and now a Senior Fellow at the Center for the Analysis of the Radical Right, said:

“Theories about supposed infiltration of Muslim organisations by the Muslim Brotherhood are routinely aired by conspiracy-mongering Muslim-hating organisations. They are almost certainly without any merit at all. It is mind-boggling that the UK Government would appoint a man to head its Commission for Countering Extremism who interacts with hardline, anti-immigrant organisations and apparently promotes completely discredited claims about the supposed infiltration of Muslim institutions by radical Islamists. It is impossible to see how Robin Simcox could offer the Government any kind of balanced, impartial information or strategic policy ideas.”

The Home Office responded to these revelations by stating “Robin Simcox was appointed as interim Lead Commissioner, due to his wealth of expertise in the area of extremism,” they said. “The role of interim commissioner is independent of Government but all individuals appointed to roles like this are carefully vetted.”