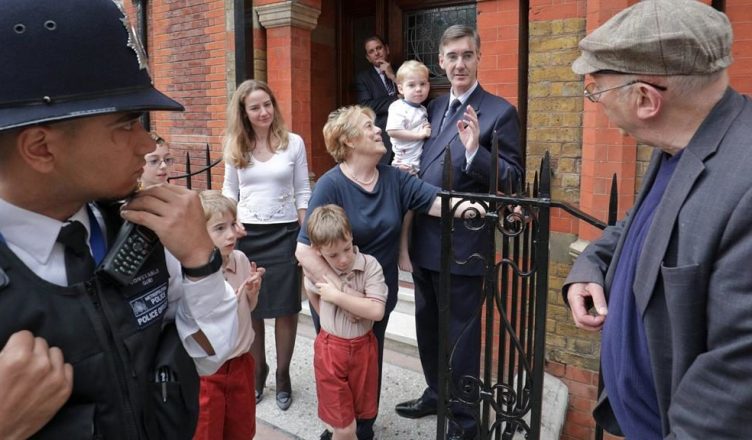 The wealthy steal from the working class and we are not allowed to talk about it. One of the functions of the media is to limit debate to very narrow discussions that do not contradict corporate or capitalist interests. As such it wasn’t surprising that when Class War protested outside Jacob Rees-Mogg’s house because he didn’t pay his nanny the living wage, the media tried to find something else to talk about.

It was entirely unremarkable that journalists, commentators and politicians maintained complete and total discipline in ignoring the facts and creating a false narrative. Let’s not forget it was the MP that brought his children to the protest and kept them there. It’s also unremarkable that the press (the corrupt moralists of our time) worried about the effect the protest would have on the children (some even calling it “child abuse”) whilst ignoring the effect that Mr Rees-Mogg’s political activities have had on life chances of millions of working class children. Even the concern the press has for Rees-Mogg’s children doesn’t extend very far. None of the journalists on the “acceptable” left of centre has pointed out that the way the wealthy treat and use the poor people they hire in front of their child is a form of class training which teaches their children not to feel empathy for people outside of their own class – in itself, this could also be seen as a form of abuse.

What is more interesting is the number of non-media people who are not only echoing the lies of the media, but are also arguing that the protest was tactically foolish because it makes “the left,” look bad. This argument seems to be based on the premise that people would see the protest and think, “I was starting to question my ongoing exploitation by an economic and political elite, but after this I need to give that nice UKIP another look.” It is, of course, totally possible that a group of people who did not, and never would like the group Class War, will continue not to like them. But what has also happened is that an issue that otherwise was not getting any attention is now getting some. In fact the protest gives us an opportunity to talk about the one of the key issues that we are never supposed to, the fact that we are in the middle of a class war and the ruling class are winning.

It is true that the issue of the rich exploiting the poor (in this case, Rees-Mogg exploiting his nanny) is sharing media space it otherwise wouldn’t have had, with the issue of children being near a protest. But this is partly because all of those who argue that the protest was tactically flawed aren’t talking about the issue of the protest. They are the cause of the problem they are bemoaning, and this is because they like to masquerade as tactically astute fellow travellers on the left, rather than simply people repeating the lines given to them by the press.

The effect of any protest (in a non-revolutionary situation) is dependent on the reactions of those who claim to share the same or similar political aims. After every mass action a battle takes place to define the impact of the protest. Will it be about a broken window or a poor police officer that hurt their hand whilst beating a protestor, or will it be about the original issue that caused the protest? You can say what you like about Class War, and the ACG certainly has disagreements with some of their politics, but they at least gave us the opportunity to use their protest as a chance to talk about the crimes of the wealthy. Those who have chosen not to talk about this issue but instead choose to condemn the group for a cynically manufactured non-issue (Rees-Mogg’s children), have instead made their own political choice.