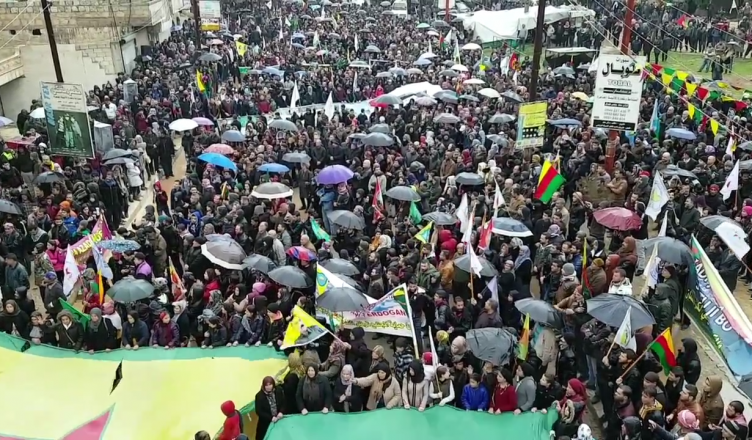 We deplore the invasion of the city of Afrin by the Turkish state and its armed forces. The main reason for this military adventure is Turkish government concerns that the Syrian Democratic Forces (SDF) – primarily controlled by Kurdish forces, which include the PYD (Democratic Union Party), the Kurdish People’s Protection Units (YPG) and Women’s Protection Units (YPJ), closely affiliated to the PKK, the Kurdish nationalist party operating within the borders of the Turkish state – have attempted to set up a zone of influence close to Turkey’s borders. Having a Kurdish zone so close by scares the Erdogan regime in Turkey, which dreads the encouragement this would give to the 16 million Kurds living within the borders of Turkey.

For its part, Russia has entered into alliance with Turkey, which represents problems for its client, the Assad regime in Syria. Russian air forces controlled the skies above Afrin, so the capture of this city by the Turkish army is with the tacit approval of Russia.

The Assad regime is concerned about US support for the YPG. The USA has backed the SDF in its attacks on the ISIS jihadists, as well as furthering its interests and influence in the region. It has established ten temporary bases in order to facilitate these aims.

The Assad regime wants to see the withdrawal of all occupation forces in Syria, including those of the Americans and Turks. Russia, who up to now fully supported Assad has established relations with Turkey and wants an end to the war in the region which until recently involved its own intervention in the region with the use of air strikes and the deployment of special forces. The Assad regime is itself concerned about the development of Kurdish enclaves but is aware that the Turkish state wishes not just to destroy those enclaves but to dismantle Syria, with its support for jihadist armed forces.

The USA has supported the Kurdish forces not out of some concern for “democracy” but to use these forces to combat ISIS and to gain access to oil and gas resources. The YPG for their part were happy enough for this support. Now though, the USA is concerned that its alliance with the Turkish state is jeopardised by the Turkish government’s increasingly cordial relations with Russia and this accounts for the US decision to end support for the Kurds.

For us as internationalists our first aim must be to condemn and mobilise against the Turkish invasion and against continued British arming of the Turkish state.

As our comrades in the anarchist communist group in Turkey, Yeryüzü Postası, note:

“We can see that power-holders in different countries are rubbing their hands with glee about the Afrin operation. It is understood that Russia and USA are constructing their plan on dividing Syria in line with their spheres of influence and probably they have agreed on it. As far as we’ve inferred from statements of England, they are willing to take a share from oil reserves and other natural resources – possibly, again, via a partnership between Shell and Koç Holding. France wants to re-establish its activity in the region.”

For its part, the Democratic Self-Administration of the Afrin province, which is the de facto government of the area and controlled by the SDF has actually called on Assad to come to their aid. In other words, support from a murderous regime that they want autonomy from.

As one Kurdish anarchist has remarked,

“I can conclude that in Bakur and Rojava a couple of high-disciplinary and authoritarian political parties, PKK and PYD, are behind building democratic confederalism in both Kurdistan, Bakur and Rojava. It is these parties that are the ones making major decisions, planning and designing the policies, and also setting up diplomatic relationships with other countries and other political parties. It is they who negotiate with their enemies or the states, and make war or peace. Of course, these are very big issues and extremely important as they shape the future destination of the society. However, unfortunately it is the political parties which are making these decisions and not the people in their own assemblies and mass meetings, or through direct action.”

The imperialist powers are as usual taking sides according to what suits their interests and not what is best for the people of the Middle East. As anarchist communists we do not support any faction in an in inter-imperialist war, even if some of them might appear to side with those being attacked by ISIS or by Turkey. We also do not support nationalist political parties who have the goal of establishing new States, no matter how libertarian the rhetoric may be. There may well be examples of self-organising in areas of Rojava but the problem is that they are still ultimately controlled by authoritarian political parties who have made a cult out of their leader Öcalan. It is not a move towards genuine self-organisation if you are able to do it because the great leader has said that this is what you should do. The situation is very complicated and though we must stand in solidarity with all those who are being killed and resisting Turkish forces, Syrian forces, ISIS etc, we do not then support uncritically the nationalist parties such as the YPD which have assumed the leadership of the resistance.

It is the masses of the Afrin province and of Syria, the peasants and workers who suffer from the depredations of all these murderous gangs, whether they be those of the Turkish state, the different jihadi outfits, the USA and Russia, the Hezbollah and Iranian units. It is the masses who suffer displacement, massacre, bombing, mass rape and the destruction of their land and homes. Neither can there be reliance on the Kurdish nationalists who seek time after time to form alliances with different regional and world powers, only to be betrayed on every single occasion. The only answer to the unfolding situation is the development of a strong working class movement against war and against capitalism itself.