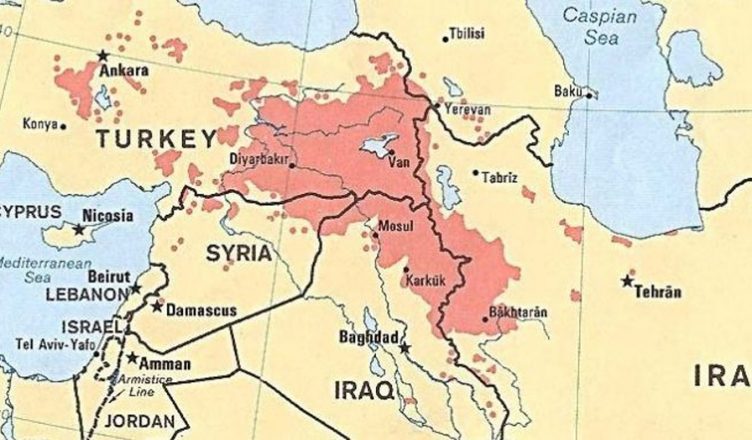 The Kurds have entered into alliances with local States and imperialist powers, always to be betrayed. After World War One, they were promised their own state by the victorious imperialist forces of Britain, France and the USA. These promises, enshrined in the Treaty of Sevres in 1920, proved to be worthless, and anyway it was always about how the great powers would carve up the old Ottoman Empire.

The Kurdistan depicted in the Treaty of Sevres would have been under British control. Some Kurdish nationalists supported this, but others sided with the Turkish nationalist military leader Kemal Ataturk to fight the Allied powers. These Muslim Kurds preferred Ottoman or Turkish nationalist control to domination by a Christian power. Others feared that the British would re-introduce Armenians – who had fled after the genocidal attacks on them by the Turks – would be re-introduced to the region. This was a decision to be regretted by the Kurds as they experienced the reality of life under the Ataturk regime.

The British had occupied the oil-rich province of Mosul, where many Kurds lived, in 1918. The following year Mosul was incorporated into the newly created Iraq. The Treaty of Sevres promised the Iraqi Kurds the chance to be part of this projected Kurdistan, a promise never to be fulfilled.

In 1920 Shaykh Mahmud Barzanji led an uprising of the Iraqi Kurds against British rule and declared a Kurdish kingdom in northern Iraq. At first the British had backed Barzanji, who they saw as offering a convenient buffer territory between their interests in Iraq and the Turkish state. He had become increasingly resentful about the failure of the British to keep their promises. He was wounded, captured and imprisoned in India until 1922.

However, the British now decided to bring him back to stabilise the area against the Turkish nationalists and he was installed as governor of south Kurdistan, but after his return he proclaimed himself King of Kurdistan, turned down the British deal and allied with Turkey. Barzanji was defeated and captured again in 1932. He sued for peace and was exiled to southern Iraq. During the series of uprisings against the British, the RAF used bombs and chemical weapons against Kurdish insurgents.

In 1968 the USA supported the coming to power in Iraq of the Ba’athist Party, which promptly began to attack the Kurds in that country. In the 1970s it supported the Shah of Iran as its ally in the region, and gave support to the Kurds against Iraq. When war between Iran and Saddam Hussein’s Iraq ended suddenly in 1975, Iran dropped its Kurdish allies and the Americans stopped supplying them with military aid. The Kurds then were at the mercy of Saddam.

In the 1980s The USA saw Saddam as a useful regional ally, particularly with the fall of the Shah and the Islamic Revolution in 1979 in Iran. The Americans turned a blind eye to Saddam’s atrocities against the Kurds. This changed again in 1990 with Saddam’s invasion of Kuwait. He was now the enemy of the USA and American support was given to Kurdish and Shiite revolts in Iraq. However with the declaration of a Kurdish autonomous zone in northern Iraq, the USA failed to provide assistance and the revolt was crushed.

With the Syrian civil war, the Kurdistan Workers Party (PKK) of Turkey, who had been waging a war against the Turkish State, in alliance with its proxy, the Democratic Union Party (PYD) took over parts of Syria from the Assad regime. They defended themselves against attacks from the Islamic State. The Americans, seeking an ally in the region, at first supported the Kurds against ISIS with air attacks, and then later with financial and military aid. The Kurds had once again become a proxy of the USA.

All of this changed with Trump’s abrupt decision to desert the Kurds and to allow the Turkish state to attack the Kurdish area in Syria. But, once again, Trump has reversed his position of pulling US troops out of Syria, under pressure from both Democrats and Republicans, and the criticisms of many retired military leaders. What this means for the Kurds in Syria remains to be seen.

As for Russia, it initially gave support to the PYD and its military units, the YPG. Now, however, Russia’s uneasy alliance with the Erdogan regime in Turkey means that Putin has given the green light for YPG forces to be pushed back from the Turkish/Syrian border. Putin met with Erdogan at the Black Sea resort of Sochi last week, and there it was agreed that Russian troops in Syria would not intervene to stop the advance of the Turkish forces. For its part, the PYD has agreed for the return of control of north east Syria to Assad and his forces. The PYD might switch allegiances and go into alliance with Russia, which will cynically play them off against the Turkish State, and then in time-honoured fashion, drop the Kurds when they are no longer deemed useful. Putin’s support of the Assad regime is still a priority and comes before any support for the Kurds.

We should also be aware of the demands by the German Defence Minister, Annegret Kramp-Karrenbauer to set up a security zone in the area and send thousands of troops there. This represents a move by the Franco-German bloc in Europe to intervene for its own interests.

Meanwhile, across the border in northern Iraq, the USA still supports the Kurdish autonomous region ruled by the Barzani family. However, this support has its limits. After an independence referendum with a 93% vote of Yes, in 2017, the USA used its troops to support Iraqi forces to push the Kurds back into their enclave and the areas taken by the Kurds in 2014, including Kirkuk and its oilfields, were retaken by the Iraqi government. This is in spite of the role that Kurdish forces had played in driving out ISIS from most of Iraq.

There is an old Kurdish saying that the Kurds have no friends but the mountains. Any attempt by the Kurds to ally with world imperialist powers as well as regional imperialist powers like Iran, have proven time and again to be disastrous. The Kurds are used as proxies, as cannon fodder for the interests of these powers in a danger zone where the USA and its British and European allies, and Russia and its allies of Syria and Iran, are in confrontation.

Only a revolutionary movement that unites Kurdish, Turkish, and Arab workers and sweeps away the ruling class in the Middle East, whether it be the Barzani family, the theocratic regime in Iran, the Assad regime in Syria and Erdogan in Turkey, can offer any real solution to the situation.