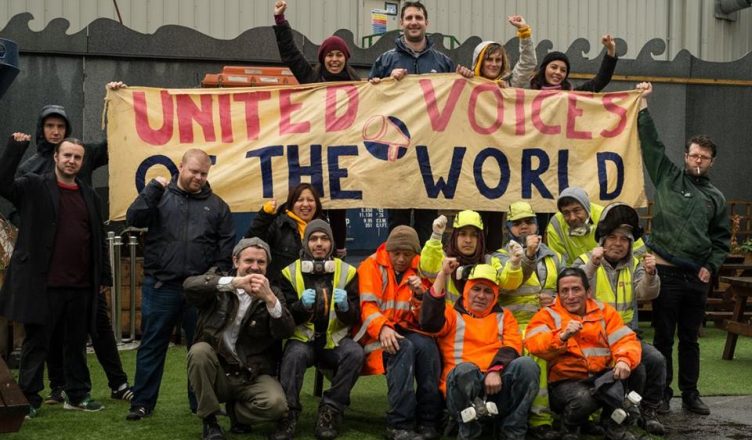 United Voices union members at the Orion recycling plant in east London walked off the job this morning in a historic and inspiring wildcat strike to protest against inhuman working conditions.

The 10 migrant workers, all of whom are from Peru, took the courageous decision to stand together and fight, despite being told to ‘fuck off’ by their foreman, and threatened with the sack.

Within only 19 hours of first coming to United Voices offices in Elephant and Castle to speak out about the conditions they endure, they were on strike and negotiating with their boss in a mass meeting at the gates of their workplace.

The workers had never been members of any union before let alone been on strike, and much less a Wildcat strike. This shows what can be achieved in next to no time and at no expense with the right combination of inspiration, determination, unity, and solidarity.

The workers, who were joined at the gates in the pouring rain by representatives from the Bakers’ Union and McDonald’s strikers, as well as United Voices union supporters, had the courage to also demand from their boss – face to face – a living wage for working in 19th Century conditions.

They demanded and won a personal pledge from the company owner to provide them, by 9am the next day, with proper face masks, air filters, gloves, four pairs of protective overalls each, soap and toilet paper – and to provide showers on site within a month.

They also won a pledge to meet with the union to discuss a 25 per cent raise in the workers’ minimum wage pay rate to the London Living Wage, plus occupational sick pay. They also received a personal apology from the site manager for abusing the workers, and walked off with the promise that for the day of this unprecedented wildcat strike they would still be paid and not be victimised!

Confident, combative, united and inspiring, these ‘invisible’ workers have shown what it takes to stand up and resist precarity and marginalisation.

Dismissed as ‘unorganisable’ by most official unions, these migrant worker members of United Voices of the World have shown that the best weapon to fight back is the collective strength of those you work with.

If ‘invisible’ migrant workers at an industrial site in east London can do this, there’s no reason why other workers can’t take on the bosses and win!

Reposted from the United Voices of the World Facebook page and libcom.org
Photo by Gordon Roland Peden.