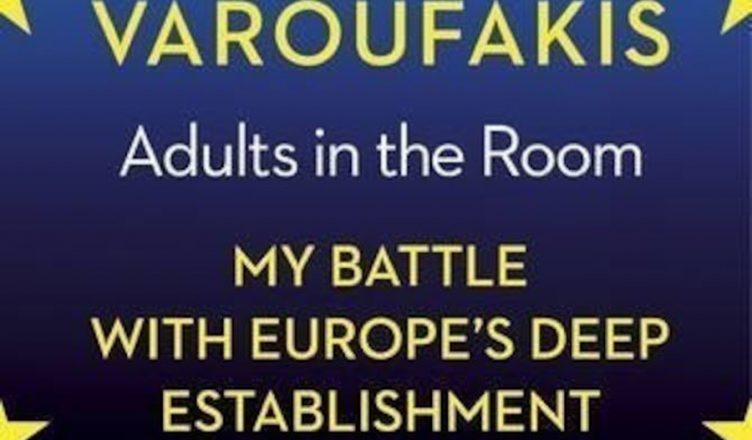 Adults in the Room: My Battle With Europe’s Deep Establishment by Yanis Varoufakis.
Published by Bodley Head. 2017.
I would heartily recommend this book…to anyone who suffers from insomnia. That Varoufakis is said to be “the most interesting man in the world” does not say wonders for the state of the planet. Political memoirs of this sort are supposed to be chock full of lively anecdotes. The only one that made me sit up and beg was his encounter with the anarchists of Exarcheia who gave him the bum’s rush from his favourite restaurant – to his great indignation. I larfed. Good job comrades! Not that there isn’t anything to be learnt from Adults.
Most importantly, this is the perfect cure for Europhiles. In quite some detail, Varoufakis describes how the ‘Troika’ (European Central Bank, European Commission and International Monetary Fund), unelected and deeply bureaucratic, used the debt crisis to foist neoliberal policies, including high austerity, on the Greek people. Yet Varoufakis himself remains firmly pro-EU, boosting the reform of hopelessly corrupt and outrageously undemocratic institutions: The triumph of hope over bitter, bitter experience.
As a professional economist (the “adult in the room”), Varoufakis was well aware of how detrimental austerity is for a country’s economy. Indeed, throughout the book, the health of the capitalist system, rather than the health of the workers, seems to be Varoufakis’s main concern. Not for nothing are social-democrats known as the saviours of the system. In this case, capitalism’s crisis management team was given no chance to do its stuff.
Whether or not dubious Keynesian tricks, such as the debt restructuring which Varoufakis witters on about endlessly, could have actually worked is a moot point. This “very, very clever person” did not have control of the currency or even of the most part of his own finance ministry – effectively ruling out such jiggery-pokery from the get go. Although, frankly, when a country is so deep in the poopykaka as Greece, there is no realistic prospect of even the slightest improvement within the system. It would be childishly naïve even to try.
What must be regretted above all is the diversion of popular enthusiasm into parliamentary politics. The little incidents in the book that show the trust placed in leftist politicians by the poor are heartbreaking. To those who know their history, Syriza’s sell-out was a betrayal foretold, made all the more certain by the Marxist acceptance of economic determinism (“there is no alternative”).
The Syriza experience, documented by Varoufakis, has important implications for the Left in this country. Unlike the Greek oligarchy, the British establishment has wisely, given the economic consequences of the Euro, chosen to remain outside the European monetary union, and, rather against their will, is now obliged to withdraw from the European political union. Bigboss-to-be Corbyn will not have to contend with pressure from that direction. However, like Varoufakis, he will certainly have to deal with the IMF and the international capitalist class, which will pull out all the stops to destroy or incorporate any radical government, even of the slightest of pink hues. And New Old Labour are much less red than their supporters would have us believe.
Working within a capitalist framework, as Labour does, means that the capitalist class holds all the aces. This is a game we cannot win. We must, therefore, refuse to play and engage them instead through direct action, through community and industrial struggle, on our own home ground where we live and work. And we must play the game to the finish.