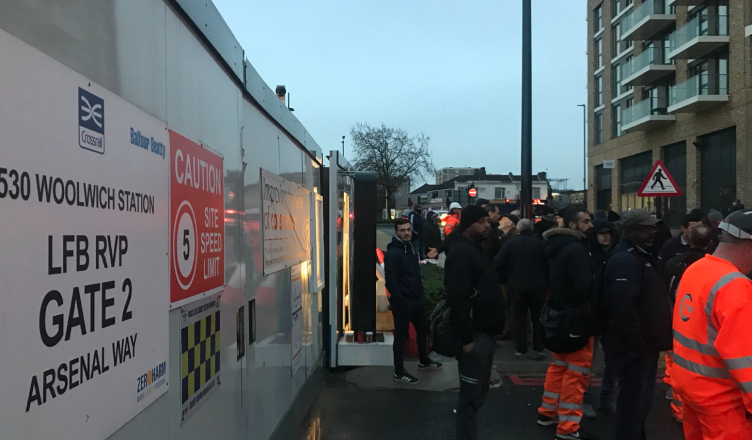 More than 200 workers at the flagship rail construction project have downed tools today in solidarity with more colleagues who have been sacked and locked out.

The dispute blew up after Balfour Beatty made 54 workers redundant at short notice yesterday and a further 50 were locked out, allegedly at the behest of blacklisting-linked boss Gerry Harvey.

The job cuts came just days after electricians at their Woolwich Station in London had filed for an industrial action ballot over pay and finishing bonuses via union Unite. There had also been complaints over the list of who was to be canned, with long-term workers and shop stewards made redundant while new workers were retained.

Around 150 electricians walked out in solidarity today at Woolwich, with more than 70 joining them from sites at Plumstead, City Airport and North Woolwich, according to construction industry and anti-blacklisting activist Dave Smith.

Talking to union-news.co.uk Smith said: “We are told blacklisting is a thing of the past but today’s anti-union hostility is plain for everyone to see.”

One Balfour Beatty worker told libcom.org that the union had called off the picket at 8am and that workers going on site after that time would not be breaking the strike. The worker also told us that it seemed like workers were “going down the appeals route.”

Balfour has said the redundancies were part of standard operations, saying “we have always been clear that our works would start to wind down towards the end of this year” and that consultation had started in November.

Site sources explained however that problems with pay rates had been bubbling since the summer and Balfour’s refusal to engage properly with requests for a completion bonus as work begins to wind down has left “feelings running pretty high.” Meanwhile, another Balfour Beatty worker told libcom.org that there were rumours the company planned to replace the sacked staff with agency workers starting from January.

Industry reports suggest that bosses are keeping a “close eye” on the situation as they fear calls for finishing bonuses could spread to other sites.

A mass picket was held at 6.30am this morning (14th December) at the Whitechapel station site.
Re-posted from Freedom News, with additional reporting from libcom.org.