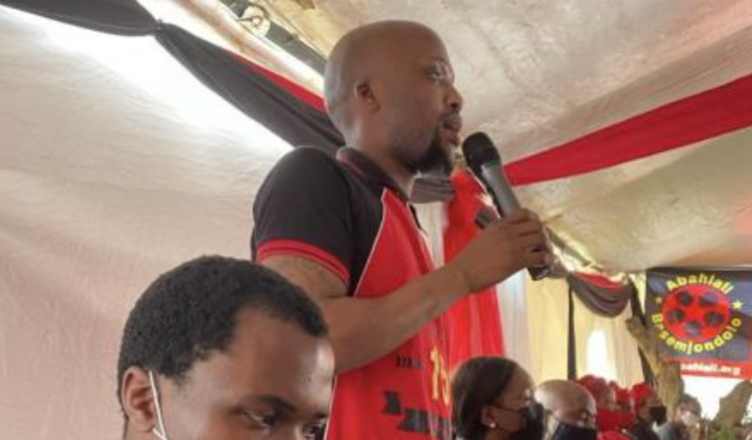 Ayanda Ngila, a leader of the eKhenana Commune in Durban, South Africa, has been assassinated

Abahlali baseMjondolo (in English: “the people of the shacks”) is a shack dwellers’ movement in South Africa which organised land occupations, builds collectives, and campaigns against evictions and xenophobia and for public housing. The movement grew out of a road blockade organised from the Kennedy Road shack settlement in the city of Durban. As of June 2021 it claims to have “more than 100 000 members in 86 branches across five provinces”.

Abahlali baseMjondolo has held demonstrations, engaged in direct action such as land occupations, self-organised water and electricity connections and used the courts tactically. It defeated the KwaZulu-Natal Slums Act of 2007 and protested against the effects of the 2010 FIFA World Cup such as evictions and xenophobic attacks. AbM has historically refused party politics, and has boycotted elections in the past under the banner of No Land! No House! No Vote! It has a history of conflict with both the African National Congress and the Democratic Alliance.

“A living communism is a living idea and a living practice of ordinary people. The idea is the full and real equality of everyone without exception. The practice, well, a community must collectively own or forcefully take collective ownership of natural resources – especially the water supply, land and food. Every community is rightfully entitled to these resources. After that we can think about the next steps. We are already taking electricity, building and running crèches, insisting that our children can access the schools. We just need to keep going.”

The following statements are taken from Libcom

Ayanda Ngidi was murdered by local ANC party thugs in Durban on 8 March 2022. His killers made no attempt to hide their identities, seemingly certain of impunity. Ngidi was a key leader in the eKhenana Commune, which is a project and branch of Abahlali baseMjondolo, which has now lost twenty of its militants to assassination and state murder since 2013.

Below are the two statements issued by the movement on 8 March 2022. The second provides some detail with regard to the assassination.

The eKhenana Commune in Cato Manor, Durban, has come under sustained violent assault from both the state and the ANC, with the local ANC working closely with the local police.
In recent months there have been more than forty arrests of Abahlali activists on trumped up charges as the local ANC and the police have sought to crush the Commune. These cases range from public violence – which has been the standard bogus charge brought against activists since our movement was formed in 2005 – to more serious charges such as attempted murder, conspiracy to kill state witnesses and murder. Activists have been denied bail and kept in jail for as long as six months before the spurious charges against them are dropped. Some activists have swiftly been arrested on a second bogus charge soon after being released from prison after a first bogus charge is dropped.

Not one of the charges brought during more than forty arrests have come to trial. In every case the charges have been thrown out of court before any trial. State witnesses – who are often directly associated with the local ANC led by NS Ngubane have admitted to having lied in court without any consequences. One police officer has noted this in an affidavidt. The local ANC and the police continue to arrest our members, with a focus on our leaders in the Commune, on false charges.

The police have often brazenly taken instructions on who to arrest and who not to arrest from Ngubane. This man enjoys the support of the Chief Magistrate too. At least twelve criminal charges have been opened against local ANC thugs by our members but as a result of the power that Ngubane has over the local police not one of the ANC thugs have been arrested. We are sitting with case numbers and yet the police simply refuse to arrest the perpetrators of serious crimes like assault and arson. If our members are reported on any allegation, not matter how spurious, they are sent straight to jail without any evidence of any wrongdoing.

When Abahlali activists run to the police for protection the police refuse to help or to open criminal charges against ANC thugs. The local ANC thugs have complete impunity to openly attack our members, and to burn their homes. The criminal justice system in Durban has been completely captured by the ANC and is being used as a tool to try and destroy the Commune.
On Sunday Abahlali convened at the eKhenana Commune for our monthly General Assembly. The meeting was attended by about 500 Abahlali members. It was a wonderful meeting.

Lindokuhle Mnguni introduced a new song which he composed in prison, where he also ran a radical reading group with books by writers such as Paulo Freire and Frantz Fanon which we were able to get into the prison. The homes of Maphiwe Gasela and Phumelele that were burnt down by the ANC thugs were rebuilt by the movement and were opened during the Assembly.
However, the Ngubane family and their ANC friends gathered nearby with alcohol. They drank and opened loud music to provoke the meeting and shouted at the meeting. Abahlali tolerated and avoided this silly and unnecessary confrontation.

At about 16:00 pm, after the meeting at eKhenana had ended, the Ngubane led local ANC group began to swear and assault members of Abahlali baseKhenana. Maphiwe Gasela who, as well as having her home burnt down, has twice been arrested on trumped on charges and spent many months prison, was sworn and intimidated by Ntokozo Ngubane’s brother, Khaya Ngubane, and others. Sniko Miya, who has spent six months in prison on trumped up charges, and Langa Mbunguzana, were assaulted and chopped with an axe. They had to be rushed to hospital. The ANC thugs also vandalised the entrance sign to the Commune and broke the windows in the communal kitchen.Once again, the police refused to attend to the scene while the assault was taking place.

A senior Abahlali leader had to phone Colonel Mkhize who has been deployed to look into the eKhenana matter. Mkhize was not helpful and referred our leader to Colonel Mdlalose who sounded very drunk and refused to help too. At first the police refused to open up a case, as they usually do, but after sustained pressure that eventually allowed the victims of the attack to open charges after they were released from hospital. The following message was received from the SAPS: Case registered on 2022-03-07 at CATO MANOR Station. ref nr CAS 58/3/2022 – contact details: 031-2037350. Do NOT reply to this SMS.

The Abahlali president has spoken directly with Minister of Police since November last year in an attempt to get the Cato Manor police, who have been fully captured by the local ANC, to abide by the law and to act in a politically impartial manner. It seemed as though the Minister was either taking sides or that he had been advised by the ANC that it was ok to attack Abahlali. However, the Minister has made no effort to intervene or to even bother to delegate this matter to the Provincial Police Commissioner. The Director of Public Prosecutions and the South African Human Rights Commission have also failed to act on complaints that were reported to them.

The silence of the Police Minister and these institutions has legitimised these sustained, violent and unlawful attacks on Abahlali.

We call upon progressive organisations and concerned individuals to call upon the Minister to stop supporting this violence and the relentless arrests of our members on fake charges. Our country is already outraged with high level of violence and crime, yet law enforcement agencies are used to crush and criminalise impoverished activists who are trying to build a just and peaceful society.

Sniko Miya and Langa Mbunguzane are seriously injured because they could not fight back. If they did try and fight back they would have been arrested by now. Local ANC people are allowed to assault our members with impunity as they enjoy the protection of the police and ANC leadership.

Once again, we thank our comrades from across Africa and from around the world for their solidarity with the Commune and our movement.

Ayanda Ngila has been murdered at eKhenana

Ayanda Ngila, a leader in the eKhenana Commune, a brave, brilliant and committed young man, a visionary leader, a shining inspiration, was murdered at eKhenana just before 3 this afternoon. Four men entered the commune from the river side, where the communal garden is, and started shooting at Ayanda as he was working on the irrigation piping.

The attack was led Khaya Ngubane, brother to Ntokozo Ngubane and son to NS Ngubane. This is the ANC group that has constantly borne false witness against our members, directed the police who to arrest and not to arrest, moved in and out of the office of the Chief Magistrate when our comrades appear in court, burnt homes, vandalised the infrastructure on the Commune and acted with total impunity against our members.

The Commune has come under relentlessly violent attack from the ANC, the police and the anti-land invasion unit. Its leaders have regularly been arrested on bogus charges, denied bail and detained in prison. Ayanda recently did six months in prison, was released when the charges were dropped and then sent back to prison on more bogus charges.

On Sunday he, and others, were welcomed back to the Commune from the second period in prison in a beautiful celebration of solidarity. That night the ANC attacked people with axes. Now Ayanda is dead. Another principled and committed activist has been murdered by the ANC. Another young life has been squandered by our oppressors, another family left in pain.

Ayanda is a martyr in the struggle for land, dignity, freedom and socialism. His name will be celebrated around the world. We will ensure that his life is honoured, and that his spirt lives on in our movement.

We express our deepest condolences to his family, the residents of the Commune and all who enjoyed his warm heart.

The ANC in Durban are violent criminals. We have found ourselves in a war. This is the time for solidarity and a collective refusal to bow to oppression.

No retreat, no surrender.