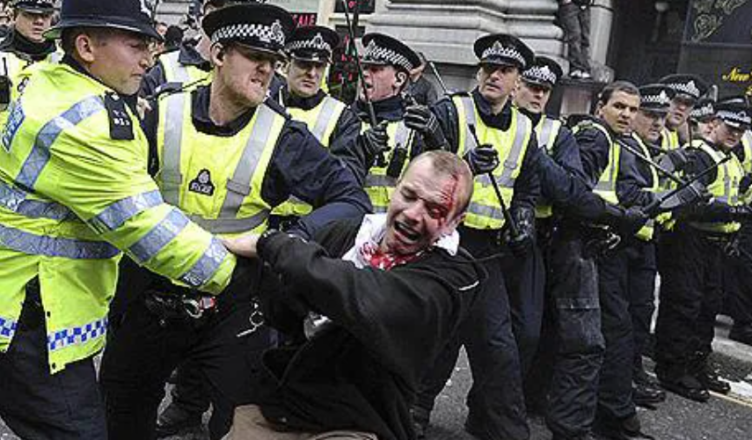 As the Financial Times generally sees itself as the in-house newspaper of the boss class here in the UK, then it’s sometimes worthwhile dipping in to see exactly what our class enemy is up to. In a recent article written by former (Labour) Home Secretary, Jack Straw (4th January), he voiced the kind of important truth that would surely be unheard of in the general mass media that’s normally aimed at the hoi polloi. He said:

‘The comforting euphemism that the British police are there to “keep the peace” disguises a harder reality: that their paramount role is to maintain the state’s monopoly of the use of force.’

Now those of us with memories of the last Labour government will be minded that Straw was every bit as eager as today’s Priti Patel to play the role of the hard-case, authoritarian Home Secretary. But what’s remarkable is how much Straw’s statement is exactly what anarchist communists have been saying for as long as we’ve been around.

While capitalism is the means by which the capitalists rob and exploit us on a daily basis, the State is the mechanism by which the ruling class actually rules us (with force or the threat of force). The way the capitalists here in the UK normally rule us is with the consent of the population. They get this consent when people vote for the various political parties in elections (with each party representing a slightly different faction of the capitalist class). But when sections of the population do not consent, then the police are there to act as enforcers for the boss class. And to do this enforcing, the State and its enforcers (the police) have a monopoly of violence.

Think back only to last year, when the police viciously attacked a peaceful women’s vigil after the murder of Sarah Everard by the murdering police officer, Wayne Couzens. And remember, just after that, how Kill the Bill demonstrators in Bristol were brutally attacked, some while sitting on the ground, by police with riot sticks and shields. And those with longer memories can think back to Orgreave and Wapping. And let’s not forget Rashan Charles, Dalian Atkinson, Mark Duggan, Ian Tomlinson, Jean Charles de Menezes and hundreds more murdered by the police – and that’s just in the UK.