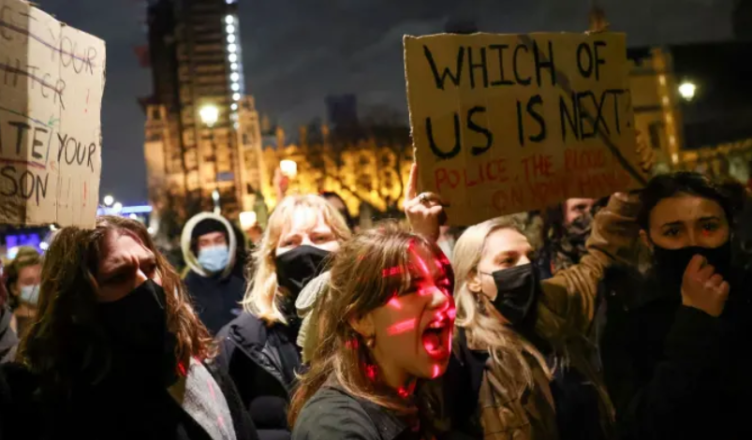 The recent rape and murder of Sarah Everard highlights the level of misogyny throughout the Metropolitan Police and society in general. The Met failed to vet Wayne Couzens’ background, ignored previous incidents of indecent exposure committed by him, one only three days before the murder.

The level of violence against women is highlighted by the following statistics. In 2020 there were 52,220 rapes reported in England and Wales but only 834, a mere 1.6%, resulted in charges. In 2019-2020 there were 1,439 convictions for rape, the lowest level since records began in. The Crime Survey of England and Wales made the estimate that since 2018/20, 121,000 rapes or attempted rapes of women took place. This shows the disinterest of the police in wanting to prosecute. This is compounded by the refusal of the Johnson regime to categorise violence against women as ‘serious violence’ and its refusal to pass a law on misogyny.

In addition to these figures, two women are killed by their partner every week in England and Wales. Of all female homicides, 40% are killed by gendered violence, 89% of which are about a woman being abused by a man. Only 24% cases of domestic violence are actually reported, according to Women’s Aid.

Within the UK police, at least 15 police officers have killed women since 2009, more than 750 Met employees have faced sexual misconduct allegations since 2010, with only 83 sacked. Undercover cops have consistently and systematically deceived women into sexual relationships, with the approval of senior officers. One woman a week reports domestic abuse by a police officer. A super-complaint by the Centre for Women’s Justice highlighted systemic failures to hold police accountable. The police inspectorate found police are failing to use protective measures in domestic abuse and sexual violence cases.

Couzens was enabled to carry out his appalling crimes by cultures of sexism and misogyny within the Met. Couzens was involved in a Whatsapp chat group involving cops from three forces that swapped misogynistic and racist messages. Two of these were Met officers, and one is a former Met officer. The other police forces suspended these officers, but the Met cops remain on duty after being placed under criminal investigation. Messages so far recovered go back to at least March 2019. The worst strongholds of this misogynistic culture are within the Parliamentary and Diplomatic Protection (PaDP) unit of which Couzens was a member. Early in October another PaDP officer was charged with rape and remanded in custody. A recent Freedom of Information request showed that 26 other Met officers have committed sex crimes since 2016, including rape, possessing sexual images of children and voyeurism. Five of these officers carried out sex offences whilst on duty. A Met officer, accused of rape by two of his female colleagues, was allowed to continue working for three years, and failed to be suspended. More recently, another Met officer, whilst off-duty, attempted to tackle to the ground a woman walking alone at night and had to resign.

The record of Met behaviour is even worse for women of colour and immigrant women. The Met allegedly failed to look for sisters, Nicole Smallman and Bibaa Henry, whose bodies were found in a park by friends. Two cops then shared photographs of the murdered women on WhatsApp. In 2020 Liberty and Southall Black Sisters brought a successful super-complaint against the Met for sharing details of immigrant women who had suffered domestic abuse with the Home Office immigration enforcement.

The police consistently ignore or tolerate violence against women. Those violent men who seek to abuse and control others are attracted to an institution, the police, which wields power and control. Meanwhile the Police, Crime, Sentencing and Courts Bill, which will increase police powers, will have no effect on responses to violence against women.

Senior police officers have attempted to put the blame on women rather than the perpetrators like Couzens. In a foul patronising comment Philip Allott, police commissioner for North Yorkshire, said that women “need to be streetwise about when they can be arrested” and “learn a bit about that legal process”. So women’s behaviour is blamed rather than that of rapists and murderers. Calls to change the culture of the police won’t solve this problem. Despite so-called reform on racism within the Met and other forces, people of colour are still suffering systematic stop and search harassment. The problem lies within the system where patriarchy has been incorporated and entwined into capitalism.

Low paid and devalued jobs with a majority of women are a breeding ground for gender and sexual violence. In war on a consistent level, rape is used as a weapon of terror and coercion, as it is in human trafficking.

In addition, gender based violence is also used against lesbian, bisexual and transgender women, who suffer from both sexism, homophobia and transphobia. The Transgender Day of Remembrance (TDOR) demonstrations which commemorate over 350 murders of transgender people every 20th November are increasingly converging with the mobilisations of November 25th.

One final thing. Cressida Dick as Police Commisioner of the Met needs to be forced to resign. A favourite of the Johnson regime and put into place by the Tories, she has signally failed to act, seven months after the arrest of Couzens. She was in command of the armed police who murdered Jean Charles de Menezez, she attempted to cover up the death of Daniel Morgan and justified the police attack on the Sarah Everard vigil on Clapham Common, and has consistently presided over a whole range of other cover-ups. Yet, thanks to the support of Home Secretary Priti Patel, she remains in post until 2024.