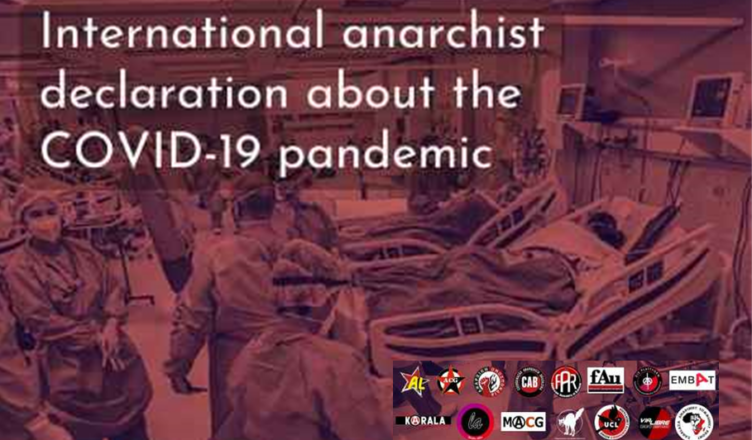 No one is safe until we are all safe

The Covid 19 pandemic has impacted every aspect of human life. It has had a dev-astating effect on people’s physical and mental health, social relations and communities, our livelihoods, and freedom to move about. It has also significantly curtailed our ability to organise effective political protests and strengthened the hand of the State.

It has highlighted the fundamental problems of global capitalism and its need for continued growth and profit. The State’s support for those goals, has been behind the origin, spread, and tragic consequences of the disease. The need for revolution has never been so apparent.

However, as we struggle to fight back, the weaknesses of the working-class movement have also been revealed. We have seen a mounting death toll, health services overwhelmed, key workers treated as expendable, and the economic costs borne by those least able to afford it, yet resistance has been negligible. Nevertheless, the pandemic has also brought out actions and sensibilities that are key to social transformation: solidarity, mutual aid, self-organisation, and internationalism.

Covid-19 and other zoonotic diseases that have emerged over the last few decades are caused by the spread of global capitalism. As capitalism takes over more and more land for logging, mining, and agribusiness, wild animals are losing their habitats and com-ing into contact with humans, creating the potential for diseases to ‘spillover’ from other species to humans. This situation is exacerbated by the demand for exotic animal meat by the growing middle and upper classes around the world.

Response of the Bosses and the State

Though some countries followed a zero-Covid strategy, the majority aimed for mitigation rather than suppression. This was largely because they wanted to keep the economy going as much as possible, putting profits before people’s health. The result of this is that the pandemic has lasted much longer than necessary. Key workers’, already some of the lowest paid, were superexploited as they bore the brunt of the crisis. The lack of well-funded health care systems caused countless deaths and many workers were forced into work because of inadequate sick pay. Meanwhile, many companies raked in the profits and there has been an increase in divide between rich and poor.

The vaccine roll-out has also shown up global inequality. Most of the vaccines have gone to the wealthier countries who can afford to pay. Calls to waive patent rights so more vaccines could be produced fell on deaf ears, showing that the profits of the pharmaceutical companies are more important for the governments. It has been every country for themselves with little international co-ordination or solidarity.

The Response from Organised Anarchism

Our organisations have taken part in a variety of struggles: for safe workplaces and educational establishments, for mutual aid and solidarity in the community, and resist-ing the attacks on workers as employers and governments seek to claw back money they had to spend.

Lockdown was a difficult time for us as our usual political activity was not possi-ble. Nevertheless, we did not join the anti-lockdown movement. Organised anarchists be-lieve in self-organisation. We do not follow rules because the government says we have to, we follow rules that we ourselves have collectively developed. It is this that lies at the heart of the problem with lockdown; rules have been imposed on people without a sense of them arising from people themselves.

They do not come from the experience of people in the community and the workplace but are developed with other agendas in mind. This has resulted in confusing and contradictory messages and has created a general mess, leading to many ignoring guide-lines, whether that be individuals, workplaces or other institutions.

Our ideas are based on the basic organised anarchism principles of self-organisation, solidarity and mutual aid. We don’t need the government to tell us what to do, nor do we have to go against our own common sense just because the government wants to keep the economy going. Of course, it is hard for people to do what is best when they are in precarious positions at work. This is why class organisation and struggle is a vital element in any strategy.

Organised anarchists believe that without a completely new society – a society without capitalism, the State and hierarchies – humanity may struggle to survive. Firstly, this pandemic will not be a one-off. Others are waiting to happen given the exploitative relationship humans have with animals and the natural world. Capitalism has brought the underlying potential dangers to the surface. Climate change and the disastrous loss of bio-diversity and habitats undermine humans’ very presence on earth. Again, capitalism and the growth economy has accelerated this process by plundering the earth for all available resources. One would have thought, and many did at the beginning, that the experience of the pandemic would inspire a new way of living- one with more mutual aid and solidarity and respect for the environment. But this optimism was lost very quickly; we were soon back to business as usual with governments keen to get us all spending again. The en-couragement of air travel is a prime example of the complete disregard for climate change. Fossil fuel exploitation, logging and deforestation, have continued throughout the pan-demic. In the desperation to get profits back up for business, climate change will take a back seat for some time to come.

The next period will see people largely focusing on coping with attacks from gov-ernment and employers as they seek to make the working class pay the cost of Covid. Much of our time will be spent fighting these economic battles. We need to make sure that the working class is united so that we can support each other and make sure that the worst off are thoroughly supported. We need solidarity and mutual aid rather than everyone fighting their own corner in one workplace, union, or disadvantaged social group. The whole nature of work needs to be questioned. This became apparent in the pandemic when we could see clearly what work is actually important. This is very difficult to do, because people understandably do not want to give up jobs – even if those jobs are alienating and harmful to themselves and the rest of the planet.

It is our historical task to continue to raise the need for revolution. We cannot con-tinue to focus just on the immediate issues facing us, seeking to merely avert the worst of the attacks and claim a few crumbs. We need to be challenging the whole system. A strat-egy will based in a place – a community, a workplace – but it will need to be firmly em-bedded in an international perspective. We can learn from our experience of the pandemic, which forced many people to restrict their lives to their immediate surroundings- their home, neighbours, community, and green space. It is in a specific place, around issues that we can experience for ourselves, that movements for much bigger changes are creat-ed.

Nevertheless, a wider perspective is essential – as the changes needed are both huge and interdependent. The reasons there are problems in a particular place are because of decisions made in corporate boardrooms, or the result of market forces that ensure profit is the main criteria shaping places.

Though climate change is also a global issue, the pandemic was much more immediate and personal. Everyone could not help but be aware of the fact that we are intercon-nected. This means that there is potential to develop more internationally-focused move-ments. The slogan “we are not safe until everyone is safe” has become part of the thinking of many. The future depends on the extent to which we can build on the positive aspects of the grass roots response and create a movement that goes beyond immediate concerns and demands to one that will lead us to a fundamental rupture with capitalism and to an anarchist society.