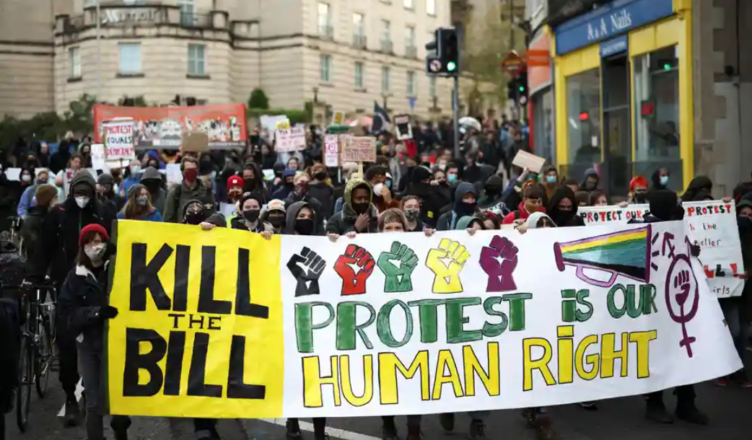 On Saturday January 15th demonstrations took place in the following towns and cities of the UK, in alphabetical order, Bath, Brighton, Bristol, Camborne, Cambridge, Cardiff, Coventry, Edinburgh, Exeter, Glasgow, Huddersfield, Inverness, Leeds, Liverpool, London, Lowestoft, Manchester, Newcastle, Newtown, Nottingham, Oxford, Penzance, Plymouth, Sheffield, Shrewsbury, Stoke on Trent, and Swansea. In some places thousands demonstrated, in others hundreds, in others a few tens. In London 5,000 marched, several thousands in Bristol, a thousand in Manchester, 250 in both Cardiff and Exeter, and 200 in Nottingham. On many demonstrations, opposition to the Nationalities and Borders Bill was also expressed.

Opposition to the bill has succeeded in uniting climate activists, with big support from Extinction Rebellion, anti-racist campaigners, with Black Lives Matter groups mobilising, and many other campaigners and activists.

In another development, the House of Lords rejected many measures included in the Bill on Monday to Tuesday night (drums from outside from a Kill the Bill demonstration could be heard in the chamber) to create new offences of:

Another measure that the Lords voted against, which can be re-introduced back in the House of Commons, is the power of the police to impose conditions on protests on noise grounds. This was a serious defeat for the Johnson regime.

Johnson’s official spokesman responded: “It is disappointing the Lords did not back the public order measures that will ensure the everyday lives of the overwhelming majority are not disrupted by a selfish minority of protesters whose actions endanger lives and cost the public millions of pounds.”

It is likely that the Bill will now re-emerge as a free standing public order bill when the Parliamentary New Year starts in April.

We should not have to depend on a bunch of unelected aristocrats and political appointees to stymie the bill. The numbers that turned out on Saturday need to work towards creating a massive movement against future attempts to re-introduce these authoritarian measures, whichever form they take in April.