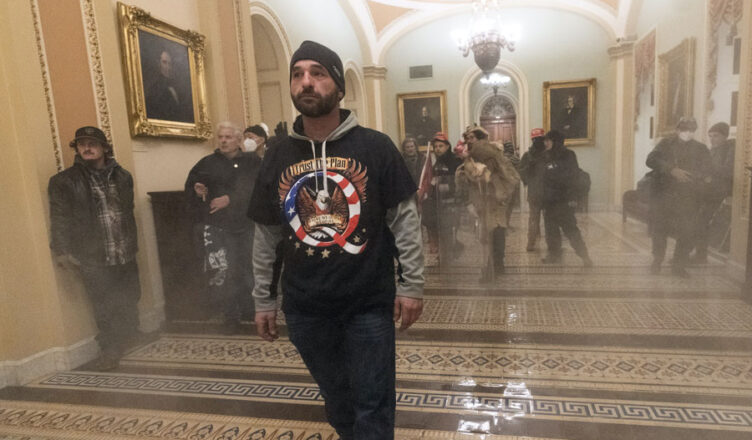 The irruption of a medley of fascist, far right, white supremacist, and conspiracy QAnon groups and individuals into the US Capitol building shows the profound malaise reigning in the United States, aggravated by four years of Trump’s promotion of reactionary ideas and policies on a whole range of issues. Those who took part in the invasion of the Capitol presented an alliance of interests that went across class. So, you could find a CEO of a data analysis company, an owner of a supermarket chain, and an attorney, a lawyer and police officers, alongside teachers, college professors, real estate brokers (estate agents), firefighters, bartenders and tattoo artists.

The invasion of the Capitol was uncoordinated and there was no united and overall plan to stage a coup, even though some of those who came to Washington were armed. A coup requires some serious planning, as well as a degree of support among the police and military and the ruling class. Whilst the feeble defence of the Capitol building can be attributed in part to sympathy among the police and National Guard for the cause of these would-be insurrectionists, it was nowhere near the level required to carry out a successful coup. Neither was the level of violence anywhere near an enduring insurrection.

Large sections of the ruling class, both inside and outside the State structures, have been irked over the last four years by Trump’s isolationist policies and by his attacks on a “normality” desired by them. He is too volatile, unstable and irresponsible for their tastes. The invasion of the Capitol has provided an excuse to attack Trump and his supporters, as noted built on a cross-class basis and made up of right wing billionaires, small business owners, marginalised elements and some disgruntled workers and professionals.

Now these sections of the ruling class are looking towards the re-establishment of the status quo under Biden and Harris. Neither of these politicians are friends of the working class and this will be made patently clear over the next few years. This is all the more reason that an independent working class movement, that includes and recognises the needs of native Americans, women and Hispanics and black people, is built to combat both the far-right and populist movement that Trump nurtures and fosters, and the old establishment represented by the Democratic Party and the Republican old guard.

It will be necessary to break some white workers away from support for Trumpism. Donald Trump has cynically manipulated his raggle taggle army of supporters and betrayed them when it was expedient, as witnessed first by his eager encouragement of the crowds in Washington, followed soon by his denunciation of the same people. He has fed on the dissatisfaction and resentment of workers in the rust belts and elsewhere, victims of years of neglect by succeeding administrations whether Republican or Democrat. He has successfully filled a void left by the lack of a powerful independent working class movement.

We should note that the high tolerance for the Trump crowd in Washington should be contrasted with the treatment dealt out to Black Lives Matter demonstrations. Indeed if it was they, or indeed any revolutionary grouping, that had attempted a storming of the Capitol, the result would have been an instant and brutal response, and probably a massacre. Neither should we forget that the classing of Trump supporters as “domestic extremists” is the same treatment that any revolutionary would receive under different circumstances, as would be the loss of jobs that some Trumpists are now experiencing as a result of the Capitol incident.

The Capitol is a symbol of ruling class power and wealth. It was no surprise that amazement was expressed by the Trump supporters, once inside the Capitol, at the opulence of this temple to the might of the ruling class.

Now the narrative will be centred around the “defence of democracy” and that all good people should rally behind the Democratic Party. But it is the system that the Democrats and the Republicans defend that has produced monsters like Trump. Biden was quick to condemn the anger expressed in riots in many cities as the result of the continuing police murders of working class people, many of them black. He will continue to do this, to support the police, to support pro-business policies that will have a devastating effect on the American working class and poor.

At the moment it benefits the boss class to have a mainstream supporter of the status quo like Biden in power. Trump is seen as an embarrassment that has to be cleansed from the body politic. If a strong revolutionary movement did ever re-emerge in the USA, then creatures like Trump or his ilk would be called up create far right populist movements and to establish authoritarian regimes.

It can be seen from the recent policy statements that the Biden-Harris administration will look towards its allies in the trade union bureaucracies and amongst the career politicians and bureaucrats in the civil rights movement to maintain its grip and tamp down unrest in the workplaces and neighbourhoods. In addition, Biden’s fostering of green energy and his support from the various social media big hitters like Twitter and Facebook point towards a restructuring of American capitalism that a section of the ruling class desires, away from the protectionism and support for the military industries that Republicans support.

Finally, let’s take a look at the hypocrisy of many Republicans, eager to dissociate themselves from Trump after the Capitol incident, but avid enablers up until then. The same goes for Theresa May, who was an enthusiastic supporter in this country, as was Boris Johnson, who recommended Trump for a Nobel prize, and as was the odious Michael Gove.

Nigel Farage of course was completely supportive of Trump, even going as far as siding with him over the Presidential election result, but issued a very brief sentence on Twitter claiming to believe that the storming of Capitol Hill was wrong. Farage claims to be a man of the people, yet was willing to waste £10,000 on a bet on the Presidential election result whilst people lose their jobs and are unable to feed their kids. In November Farage also lied on Twitter about the situation at the Napier barracks in Folkestone, Kent (a facility that is used to house new arrival asylum seekers). Farage showed footage of Asylum Seekers protesting (shouting at Police at the gates of the barracks) claiming “they all want four star hotels and a trip to Anfield”. Infact the guy who shot the footage in question had to point out that the protest was about cold, cramped conditions and access to medical attention for vulnerable people –  a situation that anyone would protest about.

Other well-known pro-Trump figures in the UK include Jacob Rees Mogg, who wrote a fawning piece about Trump in The Times and has made many other pro-Trump utterances. In December, Mogg claimed that UNICEF “should be ashamed of itself” for spending thousands of pounds on feeding hungry children in the UK when it is “meant to be looking after people in the poorest, most deprived countries in the world”. This tells us all we need to know about the fake ‘populism’ of the right which uses working class people as pawns in a divide and rule game for the benefit of the establishment. The British Royal family (with the exception of Harry and Meghan) welcomed Trump to the UK with open arms. This clearly displayed that most of the royals had no qualms about ingratiatingly giving their approval to a far-right, racist, misogynist, ableist and transphobic bigot.

Real meaningful change to our lives can only come about, not merely through the storming of a government building on the one hand, not through more police and state surveillance, or through capitalist elections, on the other – but by a working class revolution that destroys the state, the class system and abolishes capitalism, whereby we share power and resources in our communities collectively. We can only get close to this goal with a strengthened working class that is united as much as possible, not divided into Democrat and Republican, Labour and Conservative – divisions that only benefit the parasitic ruling class.