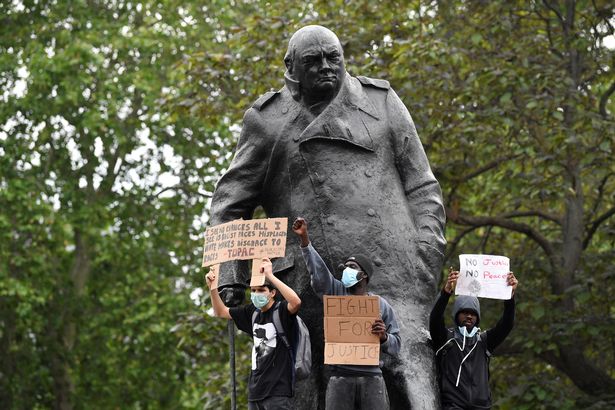 Winston Churchill is a figure from British history who is much venerated and has been discussed again because of recent graffiti on his statue in central London. We are supposed to believe that he was a war hero, that we couldn’t have won the Second World War without him and that he stood for British freedom itself. This, however, is more mythology than history and focuses only on a romanticised version of the Second World War. Even if we are to remember him for the war though, there is the problem of his strategic decisions (such as Gallipoli in WW1) which cost the British armed forces many lives, as well as the fact that it was largely working-class people who actually fought the war.

There is even much fond jollity at remembering his misogynist sense of humour by those who admire him. At school I was told the stories of him and his relations with his female servant and was bizarrely supposed to find his sexist attitude towards her amusing. It was also Churchill, who said to Mussolini before the war:

“If I were Italian I should have been wholeheartedly with you”.

Of the Jews suffering persecution because of the rise of fascism, Churchill wrote the following for an article that was never published: “For it may be that, unwittingly, they are inviting persecution — that they have been partly responsible for the antagonism from which they suffer.”

These final two quotes certainly deal with the myth of him being an antifascist hero, as he was no such thing. Churchill was of and for the British ruling class and it is for this reason that he was dedicated to preserving and expanding the British Empire at any cost. For this reason he was a disgusting, blood soaked imperialist. He was not a hero of the people, but a hero to the rich and it is only for the interests of the British Empire that he made efforts to fight the Axis powers in World War Two. This was to protect the markets and economic interests of the British capitalist class. Churchill’s class allegiances can be clearly seen throughout his career, but perhaps clearly of all during the Miner’s Strike of 1910-11, when he sent troops to Wales to confront hungry miners. A quote attributed to Churchill from this time is the following:

“If the Welsh are striking over hunger, we must fill their bellies with lead”.

Another quote attributed to Churchill from this time, regarding the hungry miners is: “Let them eat grass”.

This is what Churchill really thought of working class British people and explains his politics throughout his life. It is for this, as well as his bigotry and chauvinism that he should be remembered for it reveals his true character. People are right to be angry at his veneration. It is by no accident that we remember the mythology of Churchill, rather than the history. As Churchill said himself in 1948: “For my part, I consider that it will be found much better by all Parties to leave the past to history, especially as I propose to write that history.”