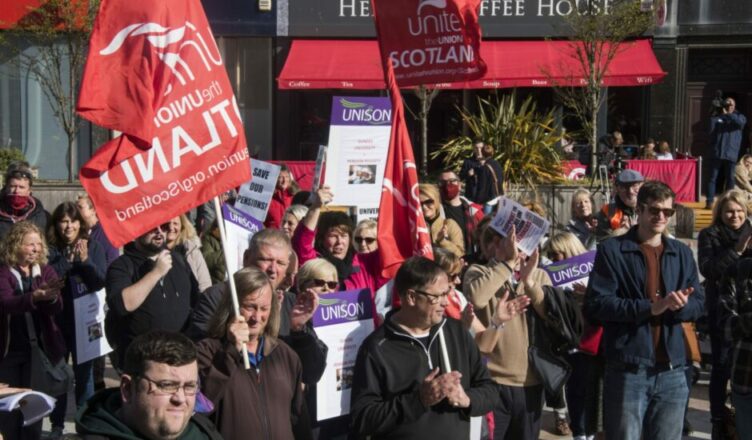 The start of the new academic year has seen a number of strikes throughout both further (FE) and higher education (HE).

On September 28th workers at 10 FE colleges went out on strike to oppose cuts in their pay. Workers at 15 colleges had voted in July to come out, after rejecting a pay offer from the Association of Colleges of 1% increase (when inflation runs at above 4%) and saying no to 30 redundancies at three colleges in the Capital City College Group. Three of these colleges then voted to accept a pay offer and the FE workers union, the University and College Union (UCU), suspended action at two others whilst reviewing a pay offer.

The union leadership has failed to fight for a credible pay rise, whilst at the same time remaining silent on the threat from Covid. The UCU leader Jo Grady went as far as praising the colleges that had accepted the pay offer of 2.2 per cent. Whilst calling for a 5% pay rise, in itself inadequate considering rises in inflation, it is clear that the union leadership would agree to something far less.

Meanwhile in higher education non-academic staff at Dundee University started a five day strike on September 29th against attacks on their pensions, which would be taken out of the present scheme and into a new one, resulting in a cut of up to 40%. The workers are already the lowest paid in the university. They were joined by other workers who are also in the same pension scheme. A united fight of both academic and non-academic staff was stymied by the union, with academic staff being balloted separately over changes to their pension scheme. Further strikes have just been called for October 25th and 26th.

Upcoming strikes in HE include one at Falmouth University where members of UCU voted by 80% for a strike against newly employed workers being excluded from the Teachers Pension Scheme. Workers at the Royal College of Art are set to go on strike in October and November over casualisation and for permanent contracts.