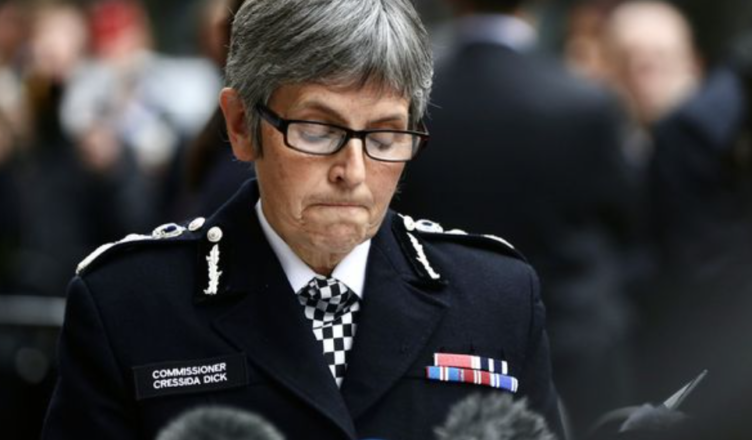 We can’t say we’re not happy to see the back of Cressida Dick, Commisioner of the Metropolitan Police. A totally innocent man, Jean Charles de Menezes, was gunned down in an operation led by her in 2005. Despite this, she became Met Commisioner. Under her watch we had the murder of Sarah Everard by Met cop Wayne Couzens, followed by a brutal police attack on the candlelight vigil at Clapham Common. We had the exposure of horrendous misogynistic and racist behaviour and the mocking of disabled people at Charing Cross police station, we had the suspicious behaviour of the Met over the parties in Downing Street, first no investigation then finally one that conveniently scuppered the Sue Gray report. We had the charges against Met cop David Carrick for multiple rapes. We had the exposure of predatory behaviour by Chief Inspector James Mason, one of Dick’s closest aides. We had the exposure of derogatory and sexist behaviour at Stoke Newington police station. We had the obstruction of the investigation into the murder of Daniel Morgan, who was investigating corruption within the Met. There was the jailing of two Met officers after the bodies of two black sisters were photographed by them We had the evidence that Dick wrote to the Home Secretary, Priti Patel, after the Extinction Rebellion actions, where she stated “In light of the challenges posed by this year’s Extinction Rebellion protests, there are opportunities for much-needed legislative change to update the Public Order Act 1986,” and that “my colleagues and I will continue to work constructively and positively with ministers and officials to take forward these changes.”

So no sympathy here then for her departure. So who are likely candidates to take over her job? Among them counter-terror chief Neil Basu, who in 2019 threatened to prosecute journalists for publishing leaked messages from Britain’s ambassador to the US, Sir Kim Darroch, where he called the Trump administration “clumsy and inept”.

The Met is deeply corrupt, racist, sexist and homophobic. So whoever takes over, they will be managing an institution that is deeply flawed. No change of leadership will make any difference.

Both Sadiq Khan, Mayor of London who put pressure on Dick to resign, and Priti Patel want to restore “public trust” in the Met. But many are increasingly realising the true nature of the Met, and of the police in general. It is there to maintain the ruling class in power.

London has suffered a destructive wave of social cleansing and gentrification over the last 40 years, accompanied by a near total annihilation of social housing, youth services wiped out, support for families in crisis reduced and access to mental health cut. At the same time the number of relatively decently paid jobs in the formal economy has nosedived. This has resulted in a rash of social problems, homelessness, increased use of alcohol and drugs, increased street and domestic violence.

The Met are there to make sure that the situation doesn’t escalate into social unrest. They are there to harass, to use surveillance systems, arrests and beatings to maintain the social order. They fear and distrust those they police, they see them as the enemy. The culture that has developed within the Met is a result of this. It is deeply authoritarian and repressive. It cannot be reformed. The Met are not there to protect us, they are there to defend the rich and the politicians. They are not the solution to the grave social problems that are growing worse. They must be abolished.