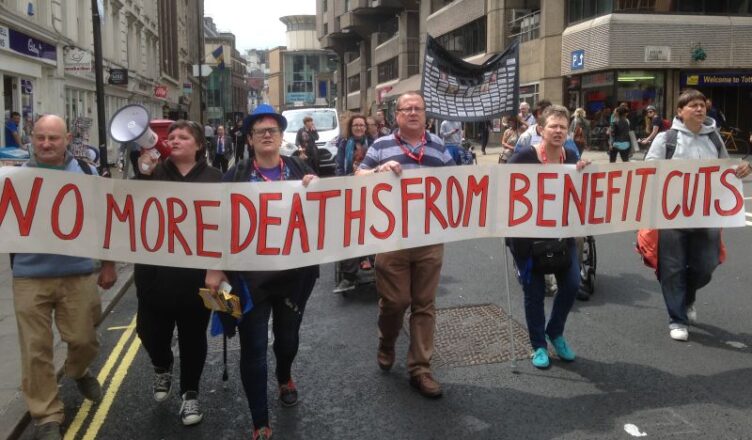 A comrade writes about how disability benefit proposals will affect him and others if they are implemented.

Ministers are currently weighing up proposals to cut spending on disability benefits, and the possibility of merging Personal Independence Payment with Universal Credit, a new government Green Paper has revealed.

The Green Paper hints at government plans to force disabled claimants into work, as well as cutting spending on disability benefits. There appears to be a public consultation on this green paper, so it looks like ministers are at least trying to look like they want feedback from the public.

One of the first user-led organisations to comment on these proposals has been the National Survivor User Network (NSUN). Mary Sadid, NSUN’s policy officer, said, “Overall, the green paper reflects a deeply flawed logic that continues to run through government departments: employment as a route out of poverty and hardship.

“This is an employment and disability green paper, fixated on avoiding ‘health related inactivity’, that links worsening health outcomes for disabled people with unemployment, instead of recognising the impact of poverty.

“In 2020, 40-50 per cent of those receiving PIP/ESA had a primary condition related to mental health.

“This green paper fails to offer hope of breaking the cycle of poverty and struggling with your mental health.”

It’s worth bearing in mind, that these are basically just proposals. So we will have to see what happens with this and see what the situation is when it gets to the White Paper stage – so although this is a concern, it’s a good idea not to get too worried about this just yet. And in order to think clearly about what to do about this it’s also not a good idea to get too worried about it if we can help it.

But what I will say is that it is somewhat of a concern, as we can’t really trust those in power, we don’t have reason to, because of what they’ve done to poor and disabled people already, for what they are doing to immigrants and refugees as well. And knowing what has passed through parliament already, it really doesn’t fill me with confidence or optimism at all.

Speaking personally, I have a hidden disability and I have other health and medical issues, and there are others out there who are in a similar or even worse situation than me. And this is worrying news for us, and that should be obvious when reading the DNS article and looking at this Green Paper.

As I say, I’ve got a hidden disability and other health and medical problems. I’m not going to go into personal details about my health and medical issues, it’s too personal and I just don’t think that’s a good idea – but I can’t cope with work. I can’t cope with it physically and I can’t cope with it mentally and psychologically, and there are others out there in the same (or similar) situation as me, and even worse situations. We don’t need to be pressured into jobs we can’t do. The stress and suffering that would cause is unbearable. We also don’t need our benefit cut. The very idea of cutting disabled people’s benefit is callous. Regarding my own situation – I’m only on enough money at the moment because of the extra money I get because of my various health issues. If that is cut, I won’t have enough money to live on. As it is, I can only afford to pay my rent because I get a top up from the council.

Now, for the last year I’ve been pretty much OK, in that I’ve been pretty much left alone and had enough money to live on. But in the back of my mind all along has been worry about my benefits being cut and the possibility of being forced into work, that I can’t cope with. For about a year I haven’t had any thoughts about suicide. And now these proposals come along, and all that worry and stress comes to the forefront and manifests itself fully. It’s now real stress and worry. I can’t relax, I can’t think properly. I have to constantly try to keep myself occupied or distracted so I’m not worried and stressed about this. I’m worried about being pressured and essentially forced into jobs I can’t do. I’m worried about not being able to pay my rent and the possibility of being homeless. I can’t just move somewhere else, for a number of reasons. If I lose this place I have nowhere else to go. And as I say, there are others out there in the same sort of situation. People who won’t be able to cope, and many of them will die if these changes go through. We don’t need this, it’s the last thing we need. And with me personally, to be honest, thoughts about the possibility of suicide have come back. Now, I don’t want to worry people out there. As things are at the moment I’m not going to do anything stupid, I’m not going to harm myself. And talking to friends has helped. But if these changes are implemented like this then, to be honest, I really don’t know what I’m going to do.

The government and the ruling class needs to be told to leave disabled people alone. This needs to be countered. And I’ve heard that there is some kind of public consultation on this, so if you can, people out there need to make their voices heard in objecting to this and countering this. We need to raise awareness of this and inform people of what’s going on and argue against this. And in countering this, really I feel it should be done by any means necessary, especially if it goes to white paper stage like this. And I feel people need to take action and fight back – and not just disabled people – as many people as possible. Even if you’re not disabled and are not directly affected by this, you can be an ally of disabled people and counter this and fight back. And I feel, as with all these struggles, that direct action is going to be needed. We have to fight back. We have to counter this. By any means necessary.

So you can raise awareness about this online and in face to face interactions with people, you can raise awareness and argue against this and we can counter this in so many different ways – whether it’s making a video and writing an article like I am, or just talking to people about this, we’ve got social media and the internet we can use too, even writing to your MP, as useless as that might be – that’s something you can do to speak up about this and make your views known. Writing to newspapers and publications is another thing we can do. But, as with the other issues, we have to do all that we can, and that probably means, at some point, direct action – really fighting back – and direct action has to be supported as well – people need to stick up for direct action when it happens and argue for it. And I can tell you that disabled people really need support and we really need people to stick up for us and I know we will appreciate it so much.

And what is really disgusting about these proposals, and the fact that the government is bringing in more austerity, is that they’ve been giving billions of pounds to their mates and to themselves in Covid contracts during this pandemic while so many people have died, and now they’re going to cut disability benefits! And they’re going to cut public services even more! The nerve of these people!

These austerity changes and cuts only really affect working class people – our lives are hard enough and we don’t need this, but these people in the ruling class have made tens of billions of pounds out of this, they enrich themselves, while taking from us and depriving us of everything. This is how capitalism works, it’s how the class system operates. And it’s a good argument for anarchism, because really – what is government there for? If it’s there just to deprive us of things and harm us and punish us then we don’t need it and it is actually something that’s harmful, and it needs to go. And we implement our own system, our own structures that benefit us, that is for us, for our working class communities. There’s something very wrong with our society when these sort of things are going on.

So, at the moment with these proposals being announced, I can tell you that disabled people are probably suffering, and we’ve suffered enough. I’ve been to Atos assessment centres, I’ve seen people who didn’t need to be harassed, being harassed by this system, and it’s something that couldn’t be more wrong. And people have died already. The government needs to leave disabled people alone, needs to leave the working class alone, which means we have to support each other and show each other solidarity. We have to come together and stick up for each other as working class people. And while we’re blaming immigrants, and refugees fleeing persecution and war, that just helps the rich – it does them a massive favour to get away with screwing us over and hoarding all the wealth and resources when we hate on refugees and point the finger at immigrants. Many of them are working class people as well, they are vulnerable and are just ordinary people trying to get by and survive on the whole – just like us, and they are also deserving of our solidarity.

Finding out about this has really affected me, I’m really angry about this and stressed out and anxious about the near future. And I’m worried about the consequences of these proposals. They shouldn’t even be proposals, it’s just wrong. And really, anyone with any humanity or decency in them should be concerned about these proposals and oppose them.