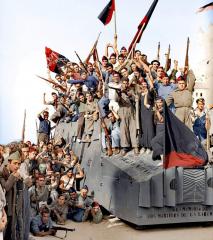 The Spanish anarchist movement had put down deep roots among peasants and workers from the late 19th century onwards and was able to create a mass movement not rivalled anywhere else in Europe, let alone the world. This mass anarchist movement had existed for fifty years prior to the events of 1936. The movement was primarily organised around the revolutionary syndicalist Confederacion Nacional del Trabajo-National Confederation of Labour-CNT. In May 1936 this movement numbered half a million. The CNT was officially committed to libertarian communism as decided at its conference in Madrid in 1919. However not all within the CNT were deeply committed anarchists. The CNT attracted a mass following because it was seen as an effective struggle organisation by many workers. Additionally, there were a number of different libertarian currents co-existing within the CNT, some of whom were anarchist communists who looked towards direct action and insurrection whilst there were also ‘possibilist’ currents who wanted to mobilise around what they saw as winnable demands like the eight hour day, gender equality, the abolition of child labour, secular education, etc. In order to maintain the CNT in a principled anarchist direction, as well as to propagandise for anarchism and to act as a federation of action groups pledged to direct action, the Federacion Anarquista Iberica (FAI) Iberian Anarchist Federation, was created in 1927. The FAI was based on affinity groups and in 1936 had a membership of 30,000. The libertarian movement organised not just in the factories and fields but among tenants. It also had an important cultural and educational presence, with ateneos, clubs where all manner of courses and meetings took place in order to educate and to introduce literacy to a population with high illiteracy rates. There were also various associations that organised around different cultural aspects and the Libertarian Youth Federation (FIJL).

The libertarian movement was a very important force in Spanish life. It outnumbered the social-democratic Spanish Socialist Workers Party (PSOE) and the union central it controlled, the Union General de Trabajadores (UGT). In February 1936 a Popular Front government was elected after defeating a right-wing coalition.

Large numbers of workers had an advanced consciousness and had been brought into a state of preparedness by the CNT Defence Committees against the threat of a right wing coup  by the fascist Falangists, the royalist Carlists, and reactionary generals in the Army like Franco, Mola and Sanjurjo. When this happened on July 17th 1936 the fightback against the coup unleashed the Spanish Revolution in Catalonia and Aragon where there were large numbers of libertarian workers and peasants. Distribution of food, maintenance of public services, requisitioning of buildings, organisation of militia columns, and the opening of collective restaurants were all undertaken by these new revolutionary bodies. The State seemed to have lost any relevance.

Land was expropriated and collectivised, in the main by CNT members and the joint CNT-FAI, and in some cases by UGT militants. In Barcelona and elsewhere factories were collectivised. As large landowners, who had supported the right, fled, their estates were taken over. Those who stayed and appeared sympathetic to the Nationalist revolt were expelled from their estates whilst some landowners were invited to join the collectives. In total around 3 million people were involved in the collectives. The collectives attempted to introduce libertarian communism but more commonly collectivism was established where a ‘family wage’ was paid.

However whilst the rank and file of the libertarian organisations were attempting to develop the revolution, the ‘leadership’ had from early on started making compromises. The CNT-FAI leaders agreed to cooperation with the regional government of Catalonia, led by Luis Companys, rather than sweeping it aside. As a result the Central Committee of the Anti-Fascist militias was set up which coordinated with the government. Companys and co. had been given breathing space. One leading anarchist militant, Garcia Oliver of the FAI stated that it was a choice between: “Libertarian Communism, which means the anarchist dictatorship, or democracy, which means collaboration.” This was a false concept, as the working class could have maintained and expended its gains without an ‘anarchist dictatorship’ whilst destroying the State both regionally as in Catalonia and centrally in Madrid. The compromises continued with representatives of the CNT joining the regional government in Catalonia, the Generalitat. This decision appears to have been made a week before by the National Committee of the CNT. The CNT had called for a Regional Defence Council, but when offered seats in a coalition in the Generalitat did not hesitate to participate. This opened the way for CNT-FAI representatives to enter the national government which was led by the socialist Largo Caballero two months later in 1936. Meanwhile the Communist Party, which had been a very small grouping, profited from its backing by the Stalinist regime in the Soviet Union. They opposed anyone who threatened the bourgeois republic in the name of effectiveness in the war against the Francoists. They therefore recruited heavily from those opposed to collectivisation, small businessmen, landowners etc. At the same time they infiltrated the Socialist Party, and through the use of Russian ‘military advisers’ and their own political commissars took a grip of the Republican military out of all proportion to their size. It was the Communist Party that pushed the drive to militarisation, to integrate the CNT-FAI militias and those of the anti-Stalinist left socialist Workers Party of Marxist Unification (POUM) into the ‘Popular Army’ of the Republic. This was resisted by the grassroots of the CNT-FAI and from the anarchist militias themselves. They were against the traditional hierarchical set up as reproduced in the Popular Army which took away any popular initiative and which could be controlled by the State. However pressure increased and militarisation began. The revolution was being transformed into a conventional war between opposing factions of the ruling class.

The crunch came in May 1937. Throughout April the Generalitat, with the complicity of the four CNT-FAI ministers, had been increasing attacks on those they referred to as ‘uncontrollables’ within the CNT, FAI, FIJL and POUM. This involved disarming workers patrol groups and raiding offices. On May 3rd the Stalinists and the Generalitat started a provocation. The Barcelona telephone exchange was under the control of its workers who were mostly members of the CNT. The police attempted to occupy the building but were resisted. As a result CNT, FAI and POUM members turned out in the streets and started building barricades. The CNT leadership called for calm, but fighting broke out between the forces of the State backed by the Stalinists. Instead of encouraging the rank and file members the CNT called for them to lay down their arms. Anarchists and POUMists were executed by the Stalinists and their allies the Catalan Nationalists. Some anarchists were shot down not far from CNT headquarters on May 5th. Also murdered on that night were the Italian anarchists Camillo Berneri and Barbieri. These refugees from Italian fascism had come to Spain to support the revolution and Berneri had been an acute critic of CNT-FAI collaboration with the State. The Friends of Durruti were a group that had developed among the CNT-FAI columns and the libertarian youth. They were opposed to militarisation and collaboration. They were heavily involved in the May Days fighting and issued a statement calling for the establishment of a Revolutionary Junta. By this they meant a council that would represent the revolutionary grassroots groups. They called for the inclusion of the POUM in this junta. However the POUM wavered and looked to the CNT-FAI leadership. That leadership called for “anti-fascist unity”, for the laying down of arms, in other words capitulation to the State, to the Stalinists and the Catalan Nationalists. Despite calls from the Friends of Durruti not to abandon the barricades, the CNT-FAI-FIJL grassroots complied. By May 7th the fighting was over. Both the Generalitat and the national governments saw this as a heavy defeat for the CNT who they saw would accept anything. The telephone exchange was occupied, and anarchist militants, including many foreign ones, were harassed and imprisoned. In June the POUM was outlawed, and its members imprisoned and murdered. In July the State moved again and excluded the CNT-FAI representatives from the Generalitat. From August onwards the State started to attack the collectives, breaking them up with physical force. The Revolution was dead. The leadership of the mass anarchist movement that had developed in Spain over many years was betrayed by its ‘official leadership’. When it came to the crunch they entered the government in the name of unity (in other words class collaboration) and anti-fascism. Winning the war was placed above winning the revolution. Instead of sweeping the State aside and establishing libertarian communism in the part of Spain they controlled they instead accepted the dictatorship of the democratic, anti-Francoist ruling class. The grassroots of the movement failed to challenge the integration of their own mass organisation into the state apparatus. As the Friends of Durruti cogently commented: “Democracy, not fascism, defeated the Spanish people”.