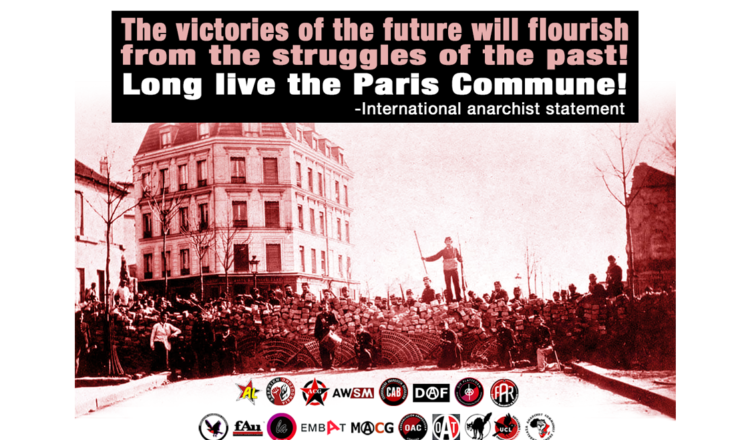 The following statement has been signed by 18 libertarian communist organisations, including the ACG. The text can also be found at anarkismo.net in various languages.

The victories of the future will flourish from the struggles of the past!
Long live the Paris Commune!

This year marks the 150th anniversary of the first modern social revolution in the glorious history of oppressed people’s struggle, the Paris Commune of 1871. For 72 days, the proletarians of the city of Paris re-organised the social relationships in terms of direct democracy, towards the direction of economic equality, mutual aid and political freedom.

The structural capitalist crisis of 1866 and the power race of the states had exacerbated class antagonisms and transnational rivalries. The Prusso-Austrian War of 1866 left open the issue of the non-return of territories claimed by the Second French Empire. On 19 July, 1870 France declared war on Prussia and France invaded on 2 August. The French troops were defeated, the Second French Empire collapsed and the Prussian army got as far as the outskirts of Paris.

The French bourgeoisie then formed a government of national unity and capitulated to the Prussians on 26 February, 1871, handing over territories and forts. The armistice stipulated that, within 8 days, a National Assembly had to be elected in order to decide on the issues of war and peace. The economic conditions of capitulation were particularly unbearable for the French people.

On 18 March, 1871 Thiers sent his troops into the working-class districts of Paris, to snatch the cannons from Montmartre Hill -cannons which belonged to the National Guard and financed by public subscription during the siege of the city by the Prussians. This attempt failed remarkably thanks to the women of Paris. Women from the Security Committee of 18th District, including Louise Michel, convinced and organised the National Guards, which consisted mainly of workers. The people of Paris revolted. The National Guard did not hand over their weapons. Then a war broke out between the working class and the bourgeois government, which then, in fear, moved its location to Versailles.

Disgusted by the armistice, despite the sacrifices that had been made, and feeling betrayed by the bourgeoisie, the people of Paris founded a power that rivalled that of the provisional government: the Commune was elected on 26 March. On the one hand, the provisional government embodied a bourgeois power wishing to preserve the social order; on the other hand, the Commune, which hoisted its own flag of the Commune over the town hall, wanted to embody a popular power wishing to change society.

Among the elected members of the Paris Commune, there was a high proportion of workers (the bourgeoisie having mostly abstained from voting on the advice of Thiers). The contribution of the organized political nuclei within it was particularly important, the actions of which were aimed at strengthening the revolutionary character of the revolution. Blanquist, Proudhonist, Marxist and Anarchist members of the First International acted in this direction. Although it was a short-lived revolutionary undertaking, the Paris Commune achieved very important breakthroughs, unprecedented for their time, ruptures that would later become key issues and aims of subsequent social revolutions. The Paris Commune was the archetype of the political organizational structure of the post-revolutionary society, acting as a catalyst in the formation and development of the political current of anarchist communism.

The Paris Commune was a working body, combining legislative and executive power in itself. It moved to abolish the regular army and replaced it with the armed people, made the positions of elected civil servants in administrative positions and judicial officials revocable, but it also proposed to seize the factories that were closed or abandoned by the capitalists, to hand them over to the workers, and the Paris Commune proceeded to unite the workers’ cooperatives of industrial and handicraft production. In addition, the Commune separated the church from political life, socialized the Church estates and schools to introduce free education and educational disengagement from the Church, elected individuals from different geographies in the executives of the Commune in the name of internationalism, banned night work for the bakery workers, three months of rent were postponed and default interests cancelled. In the meantime, women formed autonomous political clubs.

We do not fetishise the particular measures taken by the Commune, nor the structures created by it. The working class was improvising in emergency circumstances, learning as it went, and some institutions were hangovers from the old government rather than freshly created. Rather, we celebrate the egalitarian spirit of the Commune and the radical democratic attitude it took, not confining itself to politics but extending into economic life. The workers in power began a fundamental social transformation, but the opportunity to finish this transformation did not happen.

Unfortunately, the military balance of power was particularly unequal. There were only about 40,000 people in arms from the Federation of the National Guard of Paris, with substandard weapons, and they were called in to confront up to 170,000 well-armed soldiers assisted by heavy artillery units. Fearing the triumph of the social revolution, the French bourgeois government, led by Adolphe Thiers, and in agreement with Otto von Bismarck, Chancellor of Prussia, coordinated the repression of the Paris Commune. On 21 May, 1871, the troops of the government of Versailles entered Paris. Eight days of fierce and bloody battles followed. On 28 May, 1871, at 14:00, the last barricade on Rue Ramponeau, in Belleville, fell to the hands of the enemy. The Communards fought heroically to defend freedom to the very end, in every street and every alley of Paris.

The account of the defeat of the Paris Commune was particularly heavy: At least 20,000 Communards -men, women and children- died, with more slaughtered in the aftermath than killed in the fighting. About 45,000 were arrested. At least 3,000 died in detention centres, in the prison-galleys, in penal colonies or in exile. On 1 July, 1871, 3,859 Communards were exiled to New Caledonia. Amongst them, the teacher Louise Michel, who would then become one of the greatest supporters of revolutionary anarchism, and the Reclus brothers, who actively participated in the establishment of the Commune. The military tribunals forced about 3,500 Communards never to return to France.

After the defeat of the Paris Commune, Eugene Pottier wrote the lyrics of the world-renowned anthem of the working class, “The Internationale”. The main message of the Paris Commune and the anthem of the Internationale is that the power of the workers lies in class solidarity and internationalism. Only by relying on our collective strengths and mutual aid will we be able to free ourselves from the chains of state and capitalist exploitation and oppression. National unity is a lever of class compromise for the working class and an ideological weapon of the bourgeoisie, used in order to persuade the subjugated social strata to serve ruling class interests, either by gaining their consent or by leading them to the slaughterhouses of the wars between States. This conclusion was carried through by the Commune, overcoming “national unity” for the benefit of class unity and internationalism. There is no other way for the emancipation of the oppressed and exploited.

The “masters” are not willing to hand over the material privileges secured by its economic and political power, the institutions, the ideology, the mechanisms and the violence that sustain it, without a social revolution. That is why the bourgeois class always drenches in blood every attempt at radical social change, every revolutionary attempt that challenges its power and aspires to overthrow it. Revolutionary social transformations are realized only through the struggle of the oppressed and exploited classes. We are forced to walk this path. The bourgeoisie leaves us no other choice.

But we are not going to fight for the interests of the capitalists, we are not going to take up arms and point them at the proletarians of other countries, because we have more in common than divides us. We have common class interests and common historical tasks. Let us unite, then, with close relations of class solidarity and revolutionary internationalism, in the direction of the world social revolution and libertarian communism.

The victories of the future will flourish from the struggles of the past!
Eternal honour to those who gave their lives for the universal goal of the social revolution!
Long live the Paris Commune! Long live anarchism!
Oppressed and exploited people of the whole world, let’s organize and unite to shake off the state and capitalist yoke!