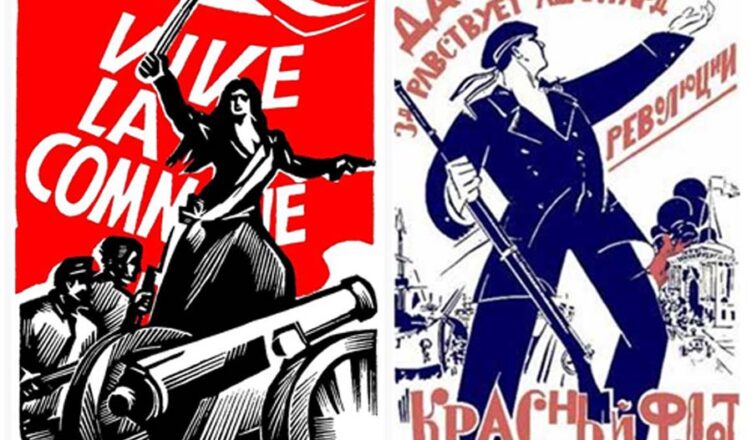 Both the Kronstadt and Paris Communes share some interesting features and tell us a great deal about the states which drowned them both in blood after only a few weeks of existence.

The Paris Commune provided revolutionaries with an example of the possibilities inherent in spontaneous popular self-activity. Though defeated, it inspired anarchists, including Bakunin, who claimed it as their own. Even Marx, who had hitherto emphasised the necessity of “political” i.e. parliamentary struggle, temporarily adopted an almost libertarian position on the Commune. The Communards, he declared lyrically, “have stormed heaven” and, though careful not to abandon the concept of proletarian dictatorship, Marx and Engels identified that dictatorship with the self-activity of the masses that the Commune brought about.

Lenin, ironically, was for a brief period before the October revolution enthusiastic about the Paris Commune, advocating the creation in Russia of the “Commune State”. However, Marx’s, Lenin’s and Engels’s libertarianism were extremely temporary. Lenin in particular soon abandoned the superficial libertarianism of his “State and Revolution” and imposed an iron dictatorship of the Party and Cheka (secret police). Having praised the Paris Commune for its libertarian self-activity, he subsequently crushed Russia’s home-grown variant: Kronstadt.

What did the Paris Commune achieve? Firstly it created a popular army from the ranks of disaffected government soldiers and the armed populace of Paris. Though ultimately defeated by the forces of the state, it fought valiantly from street to street until the final surrender. Militarily, the Commune made the strategic blunder of awaiting the government attack on Paris. Had it met the invading army some way outside Paris the outcome might have been very different. But, as a model of military organisation, the Commune gave us the people’s or workers’ militia as an alternative to the standing army which acts as guardians of our oppressors.

On the social level the Commune carried out a number of reforms. It was extremely egalitarian, fixing a modest upper limit on earnings for servants of the Commune. Those employers who had fled Paris were expropriated and the workshops were run by the workers. This latter development was of crucial importance since it demonstrated the feasibility of ordinary working people taking control of production themselves. Similarly, the question of distribution was placed in the hands of the Paris masses. In addition, whereas bourgeois “democracy” effectively removes any decision-making from the people, the Commune destroyed political hierarchy and initiated a system of delegate democracy. Delegate democracy gave the workers a direct say in the administration of their everyday lives by which elected delegates were mandated to carry out their wishes and were subject to dismissal should they fail to do so.

The Commune in its day to day activity carried out a number of changes which stemmed from their everyday oppression. For example, night work was abolished for the bakers of Paris. The Parisians would have to wait for their bread! Pawn shops, which were seen as exploitative, were closed down and the church which had played the role of ideological oppressor of the masses was disestablished, its property socialised and its involvement in education terminated.

These measures, though inadequate from an anarchist communist perspective, were all part of a thoroughly progressive and anticapitalist popular social experiment. Anarchists would today perhaps point out the limitations of the Commune, for example the continuation of the wages system and the introduction of the cooperative as an alternative to private capitalism. However, had the Commune not fallen and had the model been adopted elsewhere in France (and abroad), a more thorough-going federation of communes might have arisen to replace the nation-state.

The Paris Commune arose in response to a conservative bourgeois capitalist state, determined to maintain its power in a period of war. The Kronstadt Commune, in contrast, arose at the end of a period of civil war. But again, it was the libertarian expression of revolutionaries exasperated by the activities of a dictatorial state. The Bolshevik seizure of power in October 1917 had been carried out in the name of the soviets or workers councils which had sprung up spontaneously earlier in the year. The Bolsheviks very quickly created a highly authoritarian police state which by early 1921 had abolished virtually all political activity except that of themselves.

The period from October 1917 to 1921 had been one of continual civil war which had sapped the morale of even the state’s most enthusiastic supporters. However, rather than harness popular anti-capitalist feeling, the government strove to harness it within its own ideological and organisational straight-jacket. It was against this system that the Kronstadt sailors (“the flower of the revolution”, according to Trotsky) rose up. The Bolsheviks brought into being a dictatorship which extorted produce from the peasants at gunpoint, which enslaved workers under a hierarchy of political commissars and which granted privileges of extra food rations and accommodation to Communist Party members. The whole perverted system of restrictions and state corruption (there were over 50 levels of food allocation, depending on rank) was documented by Emma Goldman in volume two of her autobiography. Incidentally, this is now cheaply available from Freedom Books and should be read by anyone interested in the “communism” of the period.

It was in the Baltic fleet that the original ideals of the closing months of 1917 were retained in their strongest form. Despite attempts to condemn the Kronstadters as Whites or backward peasants or worse, all of which have since been shown to be false, there is no doubt that they wanted a libertarian society controlled by the working class through their own assemblies. At the naval base and on the ships the sailors held mass meetings to formulate their demands. These were summed up most clearly in the “Petropavlovsk resolution”.

Far from being counterrevolutionary, the demands of the Kronstadt Commune continued a tradition that went back at least to 1905 when Russian workers first brought about the reality of the soviet. In fact, the first demand called for “immediate new elections to the soviets” which had by then become mere rubber stamps of the government bureaucracy, being totally devoid of any independent life whatsoever.

The Kronstadters also wanted to see a restitution of proletarian freedom which had been systematically eliminated by the Bolsheviks since 1918. The communards had absolutely no desire for any restoration of power to the exploiters, but freedom of speech and assembly for the peasants, workers and their political allies was an important demand. This attempt to restore the freedom of the pre-October days was of some urgency since it was not only the bourgeoisie who were to be found in the prisons: virtually the whole of the non-Bolshevik left had been incarcerated.

In reality, a whole dictatorial, oppressive state system had been brought into being by Lenin and his party. Their knee-jerk response to any difficulty which arose after their seizure of power was to tighten the screw further: repression, bureaucracy and control were the methods used. A pleasant irony in all of this is that Lenin died a deeply unhappy man once he belatedly realised the reality of his Frankenstein society. Not only was Lenin’s Russia a dictatorship but it was also an extremely hierarchical one. Bourgeois privilege had given way to the privileges of the “commisarocracy”. Not surprisingly, the sailors of Kronstadt demanded the “equalisation of rations” for all workers except those engaged in dangerous or unhealthy jobs.

There is no doubt that the insurrectionaries had had a gutful of the Bolsheviks and their methods. Only the overthrow of the Bolsheviks and their replacement by organs of self-organised production together with the granting of freedom to artisans and peasants (as long as they didn’t hire labour) could retrieve the situation, argued the Kronstandters. But the Kronstadt demands, even though they had been mouthed by the Bolsheviks themselves, were met unsurprisingly with repression and slander. Like the communards of Paris, those of Kronstadt put up bitter resistance to the state’s bullying and military assault. With the destruction of this last breath of 1917 died the last hope of Russia’s oppressed.

The Paris and Kronstadt Communes were expressions of working class self-activity which continue to provide inspiration. Marxist-Leninist-Trotskyist groups will cynically invoke the former when it suits them whilst, inconsistently, condemning Kronstadt as counterrevolutionary. If they are particularly hypocritical they will cry crocodile tears over the destruction of Kronstadt, pointing to the “tragic necessity” of it all.

But we anarchist communists see in the commune a sketch of how society could be organised. The commune model provides an organisational basis for creating self-directing, integrated units which when federated with similar bodies could have a national and even international character. The Paris and Kronstadt Communes were both brought about under extremely difficult circumstances and lasted only for a matter of weeks. Despite their preoccupation of survival, they demonstrated the practicability of the commune as an organisational form which generated the maximum level of freedom, solidarity and equality. The commune as a geographical entity can accommodate both community and workplace anarchy. It is a model for the future.

The above is a slightly adapted version of an article written by our late comrade, Colin Parker. It was first published in Organise, the magazine of the Anarchist Communist Federation in 1991