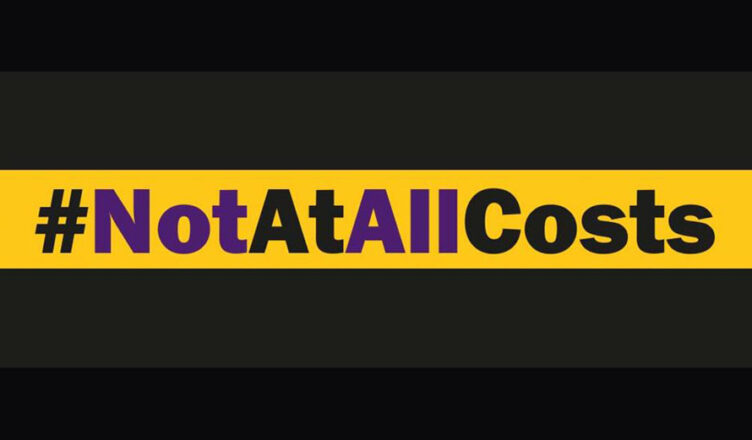 Death and human suffering is masked behind general statistics. We no longer hear about real people who have got the disease nor do we hear much about what is actually going on in hospitals. The other omission is any real evidence for how and where the virus is spreading. There is some more information in other countries such as Germany where the track and trace system is working much better, however in the UK we have no idea. Knowing what settings are likely to spread Covid is vital for any lockdown strategy.

When the number of cases increase, the government targets the hospitality industry and social gatherings. The implication is that these are the main source of the increase. You can find examples of social gatherings that went against guidelines but no information as to if Covid spread from that event. Googling “where do people get Covid-19)” gives very little.

This means that maybe we need to start using our own experience and basic logic to work out what settings are likely to spread the disease. Recently, a number of schools were shut down in South Wales. The council blamed parties and pub crawls. The claim is that the schools are safe but the problem lies with what happens outside schools.

This has been the government’s claim from the start- schools are not a major spreader and therefore can remain open. But what does our own experience tell us? Again, a search around the internet can be very frustrating. Statistics are very localised. Even the National Education Union- the biggest union in schools has little information. For example, Havering Sixth Form College in outer East London, one of the worst affected boroughs at the moment, went out on strike over safety. But there is nothing about this strike on either the national or local Havering NEU website. News about it can only be found in the local paper. As would be expected, there is not that much detail about why people are on strike and the counterclaim of the head, that there are no safety problems, is stressed. It is highly unlikely that staff are striking for no good reason, so why is the union making more of this important strike? Are there other school strikes that we don’t know about?

So it seems we cannot rely on the news, or even a major union website, to provide us with information about how safe schools are.

Nevertheless, hunting down sources, a more accurate and detailed picture begins to emerge. The Independent Sage group is one of the more reliable places to get information. Their research on schools was summarised in an article in The Independent on Nov 27th. It is clear from this report that schools are not safe places. The infection rate amongst secondary school pupils has “soared 50-fold since classrooms reopened in September. Teenagers aged 11-16 are now the age group with the highest levels of infection in England, and one in ten are reported to be off school either because of confirmed or suspected coronavirus or because they have been in contact with a potentially contagious person. And, “Children and young people at school tend to have a wide transmission circle which can endanger parents and grandparents. Whilst wishing to minimise disruption to children’s education, stricter guidelines are urgently needed for reducing opportunities for infection.”  “In some areas, infections among teenagers equated to one for every class of 30, said Independent Sage experts.”

Another important source of information, unlike its English equivalent, is the Scottish teaching union the Educational Institute of Scotland (EIS). They have launched a campaign- Not at all Costs, which campaigns for Covid-safe schools. Not only does it provide information on ballots for strikes and other actions but has also done some in-depths to find out what it is actually like to work in a school.

They have issued a number of briefing papers based on surveys with thousands of their members. At last we can hear exactly what it is like for staff. Here is a selection of some of the comments.

“On the surface, the school seems to be implementing procedures but nothing is enforced if pupils do not comply. It is impossible, due to pupil behaviour, to stay 2m away at all times as circulating room is necessary for any teaching and learning to take place in some classes. Pupils have no regard for staying 2m away and often refuse to wear masks. Getting them to sanitise hands etc is a chore in itself. Losing battle as government are saying that we can’t do anything if they don’t wear masks. Feel like safety of teachers and other school staff is of no importance to govt, no PPE provided and expected to mix with 150+ pupils a day. Is it going to take deaths before we are taken seriously.

“Rooms are unable to be ventilated- windows and doors open since August. Despite this, we are being told to shut windows now due to cold. Huge workload pressure due to additional assessments and support. Pupils refusing to abide by guidelines and coughing on you if you need to redirect behaviour. Oversubscribed classes34 pupils in a room. It is not safe.”

“School is not following advice fully. It is impossible to stay away from children. The behaviour in our school is terrible. Children are wandering around the corridors, running away from class, behaving aggressively and we are expected to teach the curriculum. It is very difficult to teach with the added fear of covid and the obvious stress of the children. I have spent two weeks in isolation due to a positive case, we had been in a training as a staff and I sat in the child’s chair, it had not been cleaned. We should be able to leave schools soon as possible after the children.”

“I really feel strongly that schools should remain open as much as possible or, at a push, go to blended learning. However I do find it amazing that, on a long day, there can be more than 210 pupils in and out of your classroom, some of whom are over 17 years old yet a doctor’s waiting room should only accommodate about 4 people because of social distancing!! I think that says it all”.

“I think it’s absurd that schools are being expected to remain open, particularly with the newly announced move to Tier 4 for 11 Local Authority areas. We can’t do anything else that involves mixing with people – and school is the only place I’m exposed to any number of people on a weekly basis now. I can’t believe we’re being thrust on to the front line with next to none of the protections offered to other front-line workers. Practically a whole year group has had to isolate, a whole teaching department was isolating putting enormous strain on other staff covering classes, and numerous other pupils/staff have been off. Two cases were confirmed in one day last week in our school – anywhere else, that would be called an outbreak – in school we get a letter saying that the risk to the wider school community has been deemed “low”! There needs to be some consistency here between schools and our day-to-day lives. You can’t restrict one and not the other.”

These comments show up the lies that are being made about schools being safe. It is clear that schools are not safe- not surprising if hundreds to thousands of pupils are crowded together for hours inside buildings. If other venues did the same- concerts, pubs etc. they would be shutdown. The consequences of government policy is obvious- more cases and more deaths.

It is vital that we have news about what is going on in schools and other workplaces- what is happening to real people and not just impersonal statistics. Armed with information on safety and actions being taken, we are better placed to come together in a united movement to protect ourselves and our communities. 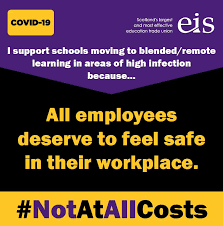